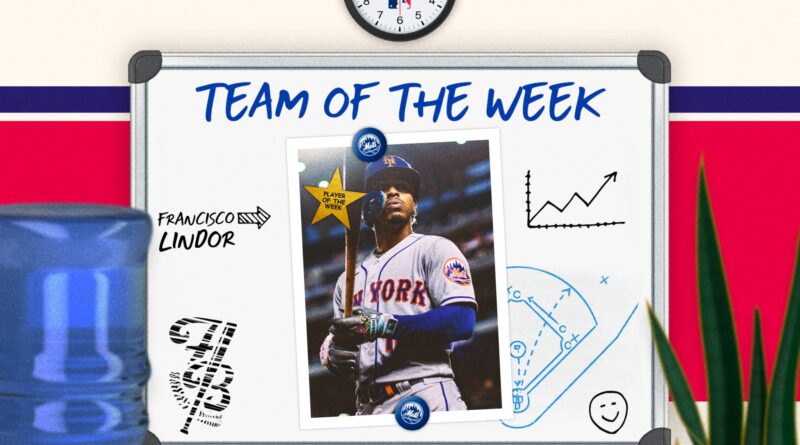 Last week was a great week in Major League Baseball, and nobody impressed more than the New York Mets, who dominated their division rivals, the Atlanta Braves, in four of their five meetings at Citi Field.

Francisco Lindor has been vital to the Mets’ success this year, and that didn’t change against the Braves. On the week, Lindor hit .400 with two home runs and 8 RBIs. Since the All-Star break, he has had almost as much success hitting, with a .393 batting average and a hit in 15 straight games. He has scored nine runs in August, the most of any player in the league.

After a tough year for Lindor, this season has been a nice comeback story for a guy who was considered the best shortstop in baseball until his trade to the Mets. Now, after that tough first season in New York, the talented, switch-hitting shortstop is back in form.

Welcome to the Team of the Week, where I go position by position selecting the best player at each spot from the week that was. Lindor leads the way; let’s see who else made the team.

Ben Verlander breaks down his team of the week.

Smith entered Sunday with a career-high nine-game hitting streak before it came to an end that evening. He leads all catchers with 59 RBIs this year, and he added six more this week while batting .417.

Alonso sits at 95 RBIs on the season, more than his 2021 season total. He is coming off a monster week in which he tacked on nine RBIs (thanks to three home runs) and a .375 average.

Mets, not Yankees, are the New Kings of New York

Ben Verlander explains why he thinks the Mets have surpassed the Yankees as the official team of New York.

Bohm tallied the second four-hit game of his career last week and has been a huge part of the Phillies’ recent surge. Bohm hit .364 with two home runs and four RBIs.

Naquin was traded to the Mets at the deadline, and in his first full week with his new team, he made quite the impression. Naquin hit .421 with two home runs and four RBIs. He had his first multi-HR game of the season against the Braves and has hit .348 through eight games with New York after hitting .246 in 56 games for the Reds.

Betts leads the NL in runs with 79, and the Dodgers are 46-10 in games in which he scores a run. The Dodgers didn’t lose last week, and Betts’s .333 BA, two HRs and seven RBIs were a huge reason for that.

Castellanos’ year didn’t start out as many people thought it would. Around the All-Star break, he started hearing it from fans and reporters, and evidently, that motivated him to turn things around. Last week, he hit two home runs, which ended a month-long homerless streak. He also hit .429 with seven RBIs.

Vogelbach is another player who benefited from a trade to the Mets. In 75 games with the Pirates this season, Vogelbach hit .228. In 12 games with the Mets, Vogelbach has hit .324, and last week, he hit a home run in back-to-back games for the first time this season. He finished the week hitting .318 with two HRs and six RBIs.

Detmers has had an up and down season, with the highest of highs coming when he threw a no-hitter against the Rays in May. After that, the rookie’s season took a turn, which eventually led to him being sent down to the minors.

Hendriks ranks eighth in MLB in saves this season with 22, and he tacked on three more last week without allowing a run in his three outings. He gave up only one hit with five strikeouts.

Ben Verlander is an MLB Analyst for FOX Sports and the host of the “Flippin’ Bats” podcast. Born and raised in Richmond, Virginia, Verlander was an All-American at Old Dominion University before he joined his brother, Justin, in Detroit as a 14th-round pick of the Tigers in 2013. He spent five years in the Tigers organization. Follow him on Twitter @BenVerlander.