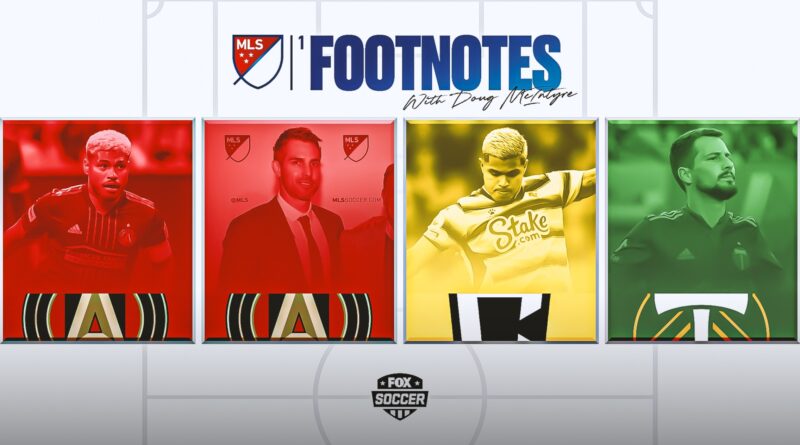 Editor’s Note: MLS Footnotes takes you inside the major talking points around the league and across American soccer.

Carlos Bocanegra isn’t blaming injuries for the predicament his Atlanta United find themselves in as the 2022 MLS regular season enters the final stretch.

Several times during the course a 15-minute conversation with Atlanta’s vice president and sporting director on Friday afternoon, Bocanegra reiterated that losing three key players in the spine of the team — veteran defensive midfielder Ozzie Alonso, longtime Premier League goalkeeper Brad Guzan and starting U.S. men’s national team center back Miles Robinson — to serious, season-ending ailments early on can’t be an excuse for United, who sit 24th out of 28 clubs in the overall league standings.

“I think that’s an understandable narrative from the outside, but we had our sights sets on trying to compete for the Supporters Shield,” Bocanegra told FOX Sports ahead of Sunday’s game in Columbus against the Crew (5:30 p.m. ET, FS1/FOX Deportes/FOX Sports app).

Now, simply making the playoffs would be a triumph, but even that won’t be easy following Wednesday’s deflating 2-1 home loss to the New York Red Bulls. It’s not impossible, though. With nine matches remaining, the Five Stripes are just four points out of the final spot in the Eastern Conference.

“We didn’t play well against the Red Bulls and in a couple of other games,” Bocanegra said. “But in the rest we’ve been competitive. We’re in a tough spot, but the last thing I or anyone else at the club is going to do is make excuses. We’re trying to get on with it, plug holes, and let’s see if we can get over the line.”

If the injuries don’t excuse United’s struggles this season, they certainly help explain them. Atlanta had every reason to aspire to the league’s best record in the winter. According to figures released by the MLS Players Association, the club’s $21 million payroll topped the league in April, although they’ve been overtaken by the LA Galaxy and Toronto FC since.

Even for one of the deepest teams in MLS, having to do without a half-dozen crucial contributors in any given game hurts. In addition to Alonso, Guzan and Robinson, fellow starters Andrew Gutman, Brooks Lennon and Ronald Hernández spent more than a quarter of the season on the shelf. Star forward Josef Martínez missed seven games. Just one player on the roster, Marcelino Moreno, has appeared in all 25 matches for Atlanta this season.

Robinson was arguably the best defender in MLS when he ruptured an Achilles tendon in May, but losing him had knock-on effects; it forced coach Gonzalo Pineda to tweak his tactics, for one. Without the lightning-quick Robinson’s ability to race back and put out fires, Atlanta’s defenders sit deeper than they did before.

Meanwhile, Guzan’s calm presence in the goal was reassuring. It was never realistic to expect his replacement, promising but inexperienced 20-year-old Rocco Ríos Novo, to provide the same level of security as a 37-year-old two-time World Cup vet.

To their credit, United continues to fight for their playoff lives. Martínez scored his 100th career goal deep into garbage time against the Red Bulls. It was the 12th time this season that Atlanta has scored in the final 15 minutes of a match.

The players believe they can still reach the postseason if only they can manage to avoid the sort of self-inflicted defensive errors that have so often cost them points this year.

“The expectation for our team is to win,” Bocanegra said.

Columbus would be a good place to start.

Beating the Black and Yellow in Ohio’s capital won’t be easy for the Five Stripes. After a slow start, the Crew have quietly climbed up the standings and are now fifth in the East with two games in hand on the fourth-place Red Bulls.

Their ascension is thanks largely to the June arrival of Cucho Hernandez from England’s Watford. Cucho has six goals in eight games overall, including one in each of his last two.

But it actually began before that: The Crew have lost just once since May.

Columbus-Atlanta is the first of two back-to-back games on FS1 Sunday; Sporting Kansas City versus the Portland Timbers will follow at 8 p.m. ET.

If it’s weird seeing Atlanta second-bottom in the East, it’s every bit as strange looking at SKC propping up the West. Injuries have hurt Sporting, too, with star striker Alan Pulido ruled out for all of 2022 before the season even started. But if you’re going to be bad, maybe it’s better to be really bad.

If there’s any coach in MLS with enough equity to survive a season like this, it’s SKC boss (and general manager) Peter Vermes. While a vocal minority of fans have been calling for Vermes’ job for months, it would be downright shocking if MLS’s longest tenured coach isn’t on the sidelines at Children’s Mercy Park in 2023.

So much for Charlotte being a potential trap game for MLS’s runaway leader. After pasting the expansion side 5-0 last weekend, LAFC picked up another three points Tuesday against Wayne Rooney’s D.C. United — their seventh victory in a row.

Steve Cherundolo’s side can become the first club to clinch a playoff berth when they travel to San Jose on Saturday — and they don’t even have to win to do it. A tie against the Earthquakes would be enough, and so would a defeat as long as the Seattle Sounders or Minnesota United lose too, or if the Colorado Rapids or Real Salt Lake don’t win. Think they like their chances?

Toronto FC’s already slim playoff hopes took a significant hit when they squandered two points at home midweek in a 2-2 draw with New England. Now they have to try to make them up this weekend in Miami, against a team unbeaten in their last four and playing their best soccer of the year.

TFC is only three points out of a postseason place. But Bob Bradley’s side still has work to do even with Italian reinforcements Federico Bernardeschi and Lorenzo Insigne now approaching full fitness.

Three of the four teams standing between Toronto and the safety of seventh place have played one fewer match — including Inter Miami. It should be a fun one in South Florida.

Coming off consecutive losses going into Friday’s marquee tilt against the LA Galaxy, there is real concern that the Sounders won’t make the MLS Cup playoffs for the first time in their history. We keep waiting for the CONCACAF champs to flip a switch and make a late run like they have so many times before, but it hasn’t happened yet.

Maybe it won’t. However, Seattle really does still have time to turn things around. While the Sounders are languishing back in 10th out West, a win in Carson would propel them all the way into 6th, at least temporarily.

They’re just one point behind Vancouver and the Galaxy, which occupy the final two spots in the conference, and one behind Nashville and Portland, the two teams directly in front of them in the table.

The Sounders have played one fewer game than all four.

Get more from MLS Follow your favorites to get information about games, news and more.