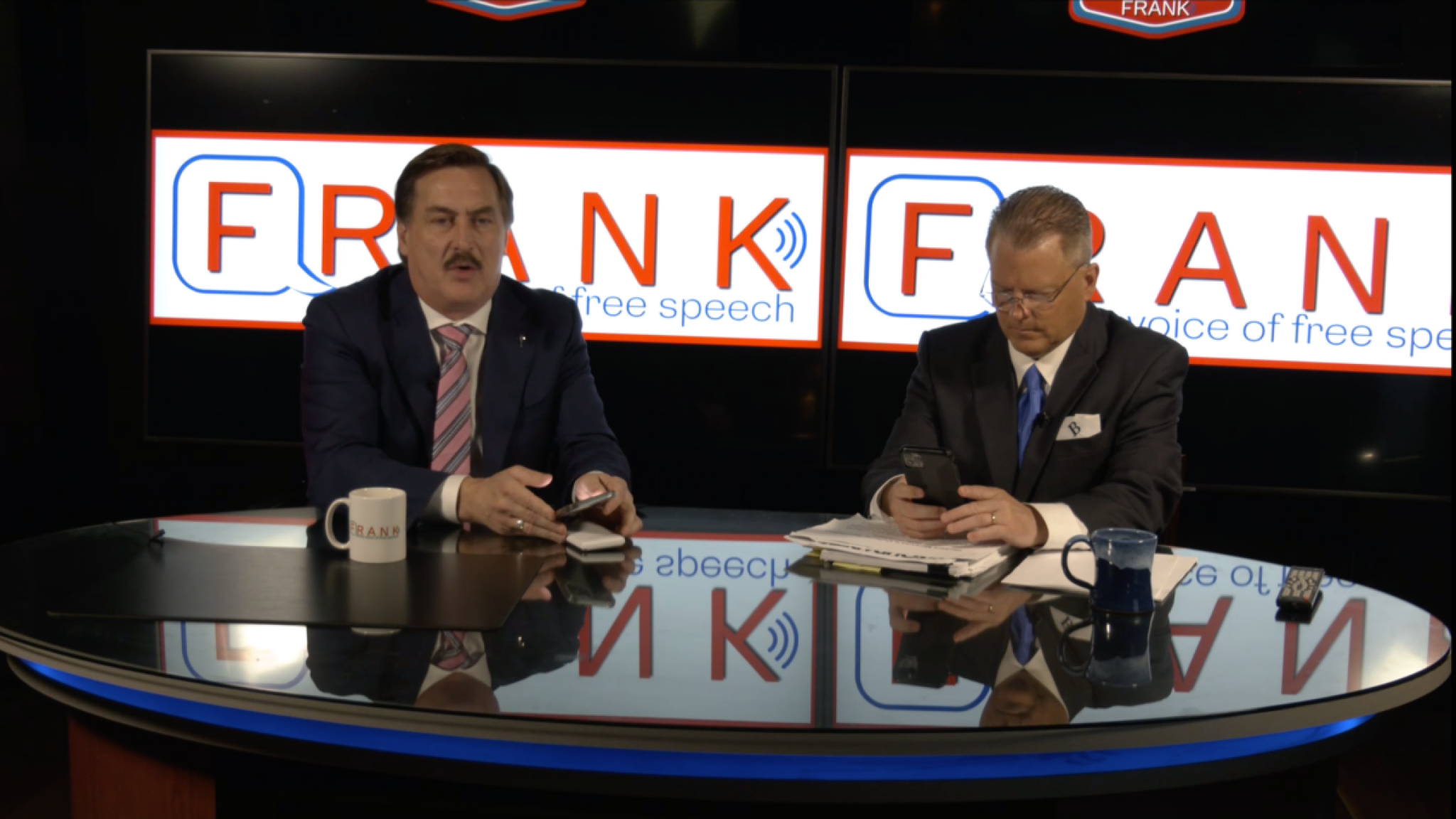 Many weird and wild things are coming out of Mike Lindell’s 48-hour bananathon livestream today—Ted Nugent, a crank call from a “reporter,” another crank call from “Donald Trump”—and somehow, I, too, was there. After a press request this morning to MyPillow, which has ignored my emails on two previous occasions, my phone rang.

“Are you okay with being live on the air?” Mike Lindell asked me. “Twenty-six million people?”

Gotta respect the game. For context, this broadcast is ongoing on the homepage of Lindell’s borked social media platform Frank, which was supposed to launch last week, and this weekend, and again today. After disgruntling followers with days of silence, Lindell struck back with a gripping tale of a foreign cybersecurity attack(!!!), the biggest of all time ever in the world. Somehow the livestream has been functioning smoothly, for tens of millions, so parts of it are theoretically working. While we still don’t know exactly what Frank will look like when it does come to fruition, the platform is supposed to be a “mix of YouTube and Twitter,” multi-billion dollar platforms that took over a decade to build and still don’t function as their overlords would like to claim.

Lindell regaled this morning’s captive audience of potential Frank users with the news that My Pillow is suing Dominion Voting Systems for $1.6 billion—retaliation for Dominion’s $1.3 billion defamation suit against MyPillow and Lindell for the latter’s multitudinous unsubstantiated speculation about a wide-ranging Deep State conspiracy that involved Dominion’s voting machines robbing Donald Trump of the presidency.

Elected officials and cybersecurity experts have almost unilaterally rejected Lindell and Trump’s nonsense on the basis that it has no basis. The Washington Post found that, as of December 20th, at least 86 Democrat and Republican judges (including at least one open Trump supporter) had rejected Trump’s post-election lawsuits. The Supreme Court, which includes three Trump appointees, tossed aside a suit brought by the state of Texas asking to throw out election results in key states. As Dominion points out in its lawsuit, a wide swath of bipartisan officials have refuted Lindell’s conspiracy theories, including Trump appointees attorney general Bill Barr and Department of Homeland Security cybersecurity head Chris Krebs. Fifty-nine election security experts jointly condemned bunk fraud claims, agreeing that none had seen any credible evidence of a “technical compromise.” Numerous top government election overseers also rejected fraud claims, noting that voting equipment was tested and certified by state and federal bodies.

In numerous interviews, Lindell had confused who owned Dominion Voting Systems and said that Dominion’s “algorithms” had failed despite additional hand counts of paper ballots.

Lindell didn’t shed further light on where he’s getting his intel or the nature of today’s supposed cybersecurity attack (just that it’s from “overseas”). He did repeatedly tell me that as a journalist I “should know” about this stuff and he used the opportunity to promote his forthcoming movie (a sequel to the “documentary” that he released in February). He did say what he would do if someone was going around making up unsubstantiated nonsense about his pillows. “You could put this in your article,” he said. “If everybody out there was saying MyPillow is full of rocks and knives, I wouldn’t sue them. I would go, hey, guys, look inside my pillow. It’s beautiful patented felt.”

It’s a line that he’s been repeating throughout the day, so I pressed the issue. How would Mike Lindell disprove un-dis-provable widespread fraudulent allegations about a single pillow, were someone to make them repeatedly on air?

Gizmodo: To compare this to Dominion, would you provide that person with every single pillow? Like, how can you disprove that one pillow did not arrive at someone’s house with rocks or knives inside?

Lindell: Are you for real?

Gizmodo: I’m curious. I mean, if you’re looking for—

Lindell: This is the common sense that has been lost in our country. I’ve sold over 50 million MyPillows. I’m just saying, if all of the sudden—actually [Alan Dershowitz, attorney retained by MyPillow] said, if all of the sudden people are out there saying there’s stuff in his pillows, I would show them in my factory and say, look at this. Or I would say, bring them in. You know what, bring in your pillow and show the news desk. Dominion won’t show one machine.

So, you know, I would say, okay, if you’ve got a rock and a knife in your pillow, show the world. They won’t even show this. So there’s the difference. I would not only show my manufacturer, I would say, I would want to show every pillow I could in the world. Everybody, open up your pillows. If Dominion didn’t have any corruptness to hide with the biggest cyber crime, part of it with China, in the history of the world—this is a crime against humanity. Dominion should say, hey, you know what? Smartmatic, all of them, they’re all tied together. We’re going to show that you open up every machine. Let’s go in there and show this to the world once and for all.

So, he wouldn’t sue. Food for thought, I suppose.

Dominion legal counsel Stephen Shackelford told Gizmodo today, in a statement, that My Pillow’s “meritless retaliatory lawsuit” was filed with the goal of trying “to distract from the harm it caused to Dominion.”

Anyways, Mike Lindell’s social media platform will allegedly be available to collect your personal data at some point in the future.