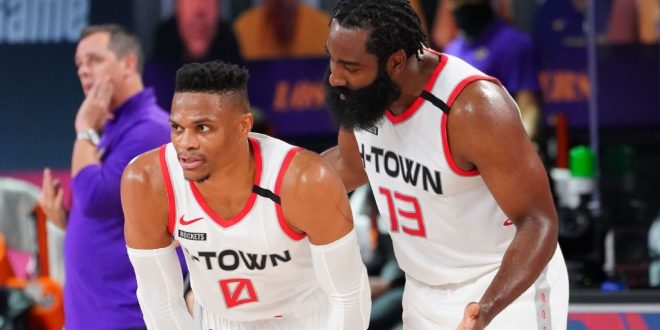 To those who have done battle with the Houston Rockets the past few seasons as they morphed into the purest form of positionless, small-ball basketball the NBA has ever seen, Friday’s 112-97 dismantling of the Los Angeles Lakers in Game 1 of their Western Conference semifinals series does not come as a surprise.

When the Rockets are at their best, opponents often find themselves trying to explain such an uncomfortable matchup.

But LeBron James has spent the better part of his career in the Eastern Conference, squaring off with Mike D’Antoni’s below-the-rim teams a couple of times a season. And none of those previous versions of the Rockets had the energy drink that is Russell Westbrook pushing the pace for them.

“I think it’s the speed. You can watch it on film. You can see it on film. But until you get out there, you don’t have a feel for it,” James said. “It’s kind of like in the early 2000s when the St. Louis Rams, ‘The Greatest Show on Turf,’ when people would always say how they scout ’em and scout ’em. But until they got on the field and they seen Isaac Bruce, and Torry Holt, and Marshall Faulk and all those guys and it was like, ‘OK, we need to play them again,’ because there’s no way you can simulate that speed.

“Getting out on the floor and having a Game 1 will give you a feel for it.”

To James, the Lakers’ biggest issue Friday night was the 27 points the Rockets scored off L.A.’s 17 turnovers, which he attributed to a mix of the Lakers’ carelessness and the Rockets’ speed.

But Houston has been doing something else since it arrived in Florida.

“It’s our defense,” guard James Harden said. “That’s what’s going to get us to where we want to go. I keep preaching it. But defensively, if we’re engaged … we got something.”

It’s just that the Rockets’ winning with defense is so against type that it’s taking a while for them to receive the appropriate credit.

Remember Harden’s block on Luguentz Dort in Game 7 of Houston’s quarterfinals series win on Wednesday over the Oklahoma City Thunder? It became an instant meme on social media because of how rarely we’ve seen — or given credit to — a Harden play on that end of the floor.

“His defense has been really good all year. Even in the bubble, it’s been even better,” D’Antoni said. “When he sets the tone, when he’s like that. I’ve talked about him so much, that’s how good he is.”

The key for Houston has been forcing turnovers, as no team has forced more takeaways in the playoffs per game (17.0) than the Rockets. Houston finished with 13 steals on Friday.

P.J. Tucker is the leader of Houston’s defense, and even he is shaking his head at how well the Rockets are playing.

“We have so many guys who can score 20, 30, 40 points every night,” Tucker said with a chuckle. “If we can play half as good of defense as we’ve been playing the last few games, we’ll have a chance to win every single night, no matter who we play.”

The Rockets held the Lakers to 97 points in Game 1, well under their regular-season average of 113.4 and first-round average of 117.2 against the Portland Trail Blazers. James had 20 points — but zero in the fourth quarter, as Houston broke the game open with a 14-0 run over a four-minute period, punctuated by Harden’s driving layup over Anthony Davis that put Houston up 101-82 with 7:15 to go. Houston never let the lead get under 13 points the rest of the way.

Davis was about the only bright spot for the Lakers, finishing with 25 points on 10-of-16 shooting and 14 rebounds. But the fact that the Lakers ended up tied in rebounding (41-41) with the much shorter Rockets speaks to how well Houston controlled this game.

Anthony Davis tries to score underneath the hoop, but James Harden comes over and blocks his shot out of bounds.

Los Angeles got virtually nothing from anyone else in its starting five. Kentavious Caldwell-Pope, Danny Green and JaVale McGee combined for 19 points on 8-for-22 shooting. Kyle Kuzma, whom James has said needs to be the Lakers’ third-best player if they’re going to win a championship this year, had just eight points on 3-of-9 shooting. The Lakers were outscored by 21 points in Kuzma’s 29 minutes on the floor.

The question is whether this is the best version of the Rockets. They’ve never had a guard as fast as Westbrook. But they’ve also never had a five-man lineup as small as they’re playing now, following the midseason trade of center Clint Capela.

They’ve never won by playing such consistent, handsy, turnover-forcing defense as they are now.

D’Antoni and veterans such as Harden and Tucker have been up in a playoff series before, only to see the favored team — previously the Warriors — figure out a way over a seven-game series to counter the ways the Rockets make teams uncomfortable playing small, switch-everything lineups.

“We just have a very unique team. We’re different than everybody else,” D’Antoni said. “Whether we’re good enough, we’ll see. It’s not even close enough to being a long way. But we can compete. And if we can compete, and get a little luck, then we’ll see.”