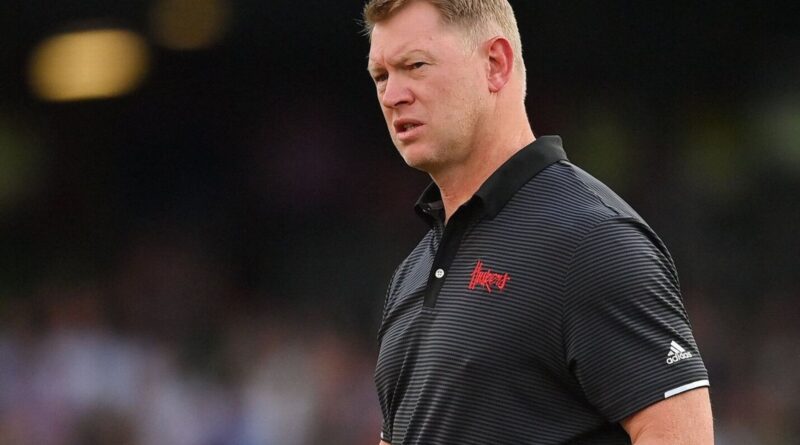 Nebraska fired football coach Scott Frost on Sunday, one day after a 45-42 home loss to Georgia Southern in what had become an untenable situation for the Huskers.

Nebraska (1-2) had been a three-touchdown favorite.

“Earlier today I met with Coach Frost and informed him we were making a change in the leadership of our football program, effective immediately. Scott has poured his heart and soul into the Nebraska Football program both as a quarterback and head coach, and I appreciate his work and dedication,” Nebraska vice chancellor for athletics Trev Alberts said in a statement.

Associate head coach Mickey Joseph will take over for the rest of the season. Nebraska hosts Oklahoma on Saturday.

“We owed it to the players to give them a different voice, perhaps slightly different vision,” Alberts said. “Give them some confidence, an opportunity. I know how disruptive these changes are, but we needed to inject something into this team to give them the confidence and hopefully help them compete. Nothing would please me more than to see a pretty significant change and help this team get over the hump and win some games.”

Alberts said the goal moving forward with both interim coach Joseph and into the future is to stop looking at the past and focus on what needs to be done to win.

“We’ll stop talking about championships or stop talking about things we used to do,” he said. “We’ll just get really process oriented, detail oriented and ultimately, when you start doing those fundamental championship habit-type things, those types of wins follow. But we need to start focusing on those small fundamental things that ultimately lead to those types of things.”

Frost played at Nebraska from 1995 to ’97, returning home to play for Tom Osborne after beginning his career at Stanford. In 1997, he helped the Huskers go 13-0 and win the national championship — becoming the first quarterback in school history to rush for more than 1,000 yards and pass for more than 1,000 yards in the same season. It would be the last national championship for Osborne and Nebraska.

Frost seemed like the perfect fit to restore Nebraska to glory after the Huskers fired Mike Riley in 2017. Frost was in his second year as UCF head coach — and in the middle of a historic 13-0 season in which the Knights self-declared a national championship — and became one of the hottest coaching candidates in the country. Even though Nebraska had not had sustained success the way it did when he played there, the lure of returning home was impossible to give up.

But from the beginning of his tenure in 2018, Frost was never able to get the Huskers going. Nebraska — once a perennial bowl team — never had a winning season under Frost. The most distressing part about watching Nebraska play was the sheer number of close games it lost.

Nebraska is 5-22 (.185) in one-score games since Frost was hired. No other FBS team has more than 16 one-score losses in that span.

Last season, the Huskers went 3-9. Seven of those losses were one-score games. In an interview with ESPN in October, Frost said, “I just want this to work so badly. I want to do everything I can to help Nebraska be Nebraska, and we’ve had a lot of work to do to get that done. We’re still in the process of that, but I’m proud of the improvements we’ve made. It’s going to happen.”

Considering how close it seemed Nebraska was to turning a corner, Alberts made the surprising move last November when he announced he would bring Frost back — but with the understanding the 2022 season would be make or break.

Frost fired four offensive assistants, had his pay cut from $5 million to $4 million and agreed to having his buyout drop from $15 million to $7.5 million on Oct. 1.

But the 2022 season began the way last season left off — with a one-score loss to Northwestern in Ireland — a game that turned on an onside kick call Frost made with Nebraska leading 28-17 in the third quarter. Nebraska did not score again and lost 31-28.

In explaining that decision, Frost said, “You can’t really foresee them scoring 14 straight and us sputtering after we played well to start the second half on offense. Again, those are excuses. If I had [to do] it over, I wouldn’t make the call.”

It only got worse Saturday against Georgia Southern, a team Nebraska paid $1.423 million to travel to Lincoln and play. Georgia Southern gained a whopping 642 yards in the game, and the student section chanted, “Fire Frost! Fire Frost!”

Afterward, Frost said, “That one hurt. We win as a team and lose as a team, and we got beat today. We got beat on schemes, and I didn’t really have an answer. They got after us.”

Not exactly the answers Nebraska fans were looking for after five seasons hearing similar statements after every loss.

Frost ends his Nebraska coaching career with a 16-31 mark.