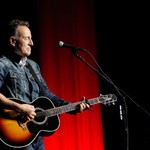 “This is NOT an emergency,” clarified New York City Mayor Bill de Blasio via his official Twitter account when the announcement was made. According to local news, tropical storm warnings were issued for New York City, with hurricane warnings from Long Island to Rhode Island.

Amid CNN’s continued coverage after the event was stopped — while it was unclear whether it would continue — Anderson Cooper spoke on the phone with stars including Elvis Costello, Patti Smith and Colbert. “I am watching historic broadcasting right now,” said Colbert from the performance tent. “I am enjoying this moment of you killing time. You are spinning straw into gold.”

Smith, who told Cooper that she was “on-call” offsite with her band as they waited for further instructions, shared a message she felt was important. “A performer is there to not only inspire but to entertain the people,” she said, clarifying that obviously I wanted to entertain. “There are things to talk about … “she said, emphasizing the crux of the continuing global and environmental pandemic. “These are important to acknowledge even in a night of celebration.”

Smith mentioned a number of the ongoing challenges in the world: fires, flooding, drought, famine, the earthquake in Haiti, fall of Kabul and the delta variant. “These are real things that are happening, so what are we celebrating?” asked the singer. She concluded that we are celebrating that “we as individuals have heart, resilience and the ability to make change.”

Smith emphasized to Cooper: “We have to face the new world … with a certain amount of willingness and sacrifice to make change.”

The Killers performed an acoustic version of “Mr. Brightside” backstage, as Don Lemon and many others watched in the tent. Elsewhere, Barry Manilow performed and played piano from his trailer.

During the concert’s pre-show, attendees — largely unmasked, though vaccinated as part of the event’s entrance requirement — were treated to a musical montage of New York affiliated artists and entertainers, including Broadway star Idina Menzel and award-winning actress Laura Dern, serenading the Big Apple with the Billy Joel tune.

But outside the Central Park event’s entrance, anti-vaccine protesters congregated with yellow stars attached to their clothing, something Holocaust survivors, historians and experts have criticized. Used by the Nazi German government to identify Jews during the Holocaust, the symbol has been appropriated by the anti-vaccination movement, which inaccurately likens vaccine mandates to antisemitic persecution during World War II.

Following the pre-event, The New York Philharmonic and CBS This Morning’s Gayle King helped open the show, with the morning show co-host thanking essential workers for taking “their stations on the front lines” in the city, which was once the epicenter of the COVID-19 pandemic and “is now the epicenter of the recovery.”

“Slowly, New Yorkers began to do what we do,” King said to a clapping crowd. “We find a way.”

The “Homecoming” concert features performances from an array of music icons and contemporary artists, spanning various genres — from reggae to rock to Latin pop and more. “Live music has the unique ability to bring us together,” said Geoff Gordon, the regional president of Live Nation, which is co-producing the event along with music mogul Clive Davis and the city.

Introducing Jon Batiste, Colbert said, “If there’s one thing I learned at the beginning for the pandemic, it’s that owning a tiger sanctuary is harder than it seems. If there’s a second thing, it’s that living any part of your life in New York is a gift.”

Behind each performer, a series of shots and graphics of New York filled the screens behind the stage. Hudson described her operatic performance with the New York Philharmonic to King, calling it an “out of body experience.”

Blue and white beach balls and big, yellow balloons with smiley faces on them bounced around the audience as the concert continued. DJ Cassidy filled in between performance sets, playing pop hits.

Proof of at least one dose of a COVID-19 vaccination was required for entry, unless an attendee was unable to get vaccinated because of a disability or age, in which case they needed to provide a negative COVID test result. Masks were optional at the outdoor event. The event was also set to air worldwide exclusively on CNN.

“There is absolutely no place more special than Central Park to celebrate the reopening of New York City,” Davis said last month, adding that the event marked an “historic occasion.”