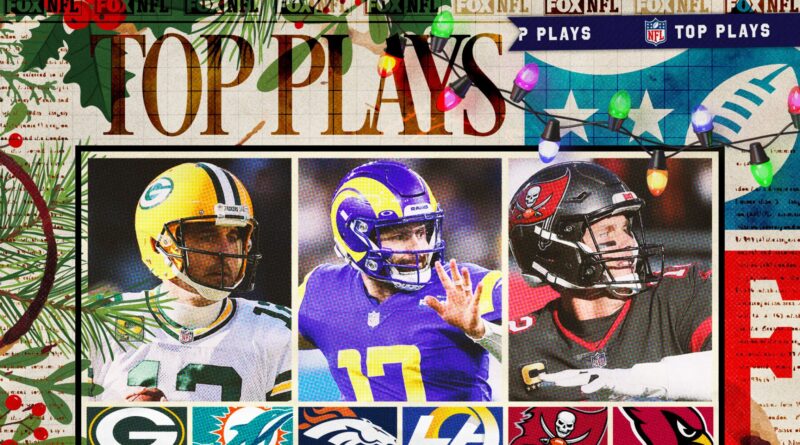 Week 16 of the NFL season continues Sunday — and we’ve got you covered with all the action from the three-game Christmas Day slate! In the nightcap, Tom Brady and the Tampa Bay Buccaneers overcame a 10-point, fourth-quarter deficit before prevailing in overtime against the Trace McSorley-led Arizona Cardinals.

Earlier, Aaron Rodgers and the Green Bay Packers upset Tua Tagovailoa and the Miami Dolphins on the road at Hard Rock Stadium in Florida. Trailing 20-13 at halftime, the Packers scored 16 unanswered points in the second half as Tagovailoa threw an interception on the Dolphins’ final three drives.

Elsewhere, Baker Mayfield and the Los Angeles Rams dominated the Denver Broncos at home in L.A. by 30-plus points.

Here are the top plays from Sunday’s slate!

The Cardinals came up with a sneaky play on fourth-and-2, picking up a crucial first down early in the first quarter.

The Bucs defense sacked McSorley on third down, coming up with the ball near midfield after the Cardinals QB lost it.

Tampa Bay ended up turning the ball over on downs after the turnover — thanks in large part to J.J. Watt.

Not how they drew it up

Late in the second quarter, Brady’s pass to Mike Evans was picked off at the Cardinals’ 2-yard line and returned 39 yards the opposite way. Just like that, things remained 6-3 headed into halftime, with the Bucs holding a slight advantage.

Marco Wilson halted a promising Bucs’ drive in the third quarter by intercepting Brady for a second time.

McSorley showed off his arm strength with a deep strike to Marquise Brown for a 47-yard gain. The Cardinals would later kick a field goal to cap the drive, taking a 9-6 lead early in the fourth quarter.

Pharoh Cooper just did that. The Cardinals punt returner went airborne over Jake Camarda in stylish fashion, much to the delight of his teammates.

The Cardinals took a 16-6 lead in the fourth quarter on this 22-yard scamper by James Conner.

Bucs not done yet

Brady pulled Tampa Bay back within 16-13 in the fourth quarter on his first TD strike of the game, a 3-yard out to Rachaad White.

Tie game in the desert

After forcing a Cardinals fumble, the Bucs would capitalize by evening the score at 16 on Ryan Succop’s 42-yard field goal ahead of the two-minute warning.

Succop came up clutch in overtime, knocking home his fourth field goal of the night to send the Bucs to a 19-16 victory.

Sure, Nets star Kevin Durant isn’t playing in a Christmas Day game for the first time since 2009 (when healthy), but another Durant is making plays.

Rams rookie corner Cobie Durant made a diving interception to give his team good field position.

Tyler Higbee made the reception right in front of the goal line and powered his way into the end zone to give Los Angeles a 10-0 lead in the first quarter.

Bobby Wagner got in on the fun, intercepting Russell Wilson his former teammate with the Seattle Seahawks, to give the Rams great field position on back-to-back drives.

Cam Akers adds to the lead

The Rams running back found his way into the end zone on a three-yard run to give L.A. a 17-0 lead in the first quarter.

The Broncos receiver made a diving grab along the sideline that was initially ruled incomplete, but Denver challenged the play and the quick review determined Sutton made the grab.

The catch helped set the Broncos up for a field goal and make it 17-3.

The Santa Claus of TDs

The Rams followed that up with a 2-yard touchdown rush from Akers to take a 31-6 lead into halftime.

Denver added a touchdown midway through the fourth quarter, courtesy of a sideline end-zone grab from Greg Dulcich.

Durant sealed the deal for the Rams with an 85-yard interception-turned-touchdown in the fourth quarter.

Nearly running all the way

After the Dolphins went up 3-0 on the opening drive, Keisean Nixon put the Packers in great field position, returning the ensuing kick 94 yards to put Green Bay within Miami’s 10-yard line. The Packers weren’t able to fully take advantage, settling for a field goal.

Waddle your way for six!

Jaylen Waddle took Tagovailoa’s pass the distance, turning a 10-yard reception to an 84-yard touchdown to put Miami up 10-3.

Got a Marcedes for Christmas

Tagovailoa’s favorite gift this season has been Tyreek Hill, and he connected with him again on Christmas. The star receiver hauled in a 52-yard grab to put the Dolphins at the Packers’ 1-yard line.

Then, Jeff Wilson ran in for a touchdown on the ensuing play to give Miami a 17-10 lead.

Not on Miami’s watch

The Packers tried to keep their drive alive by running a fake punt on fourth down deep in their own territory. The Dolphins sniffed out the fake quicker than Santa sniffs cookies on Christmas Eve.

Rodgers used the play-action to his advantage, finding Christian Watson open for a first down to help set the Packers up for a field goal to make it 20-13 before halftime.

Rodgers moved to his left and found Lewis again, but this time for a 30-plus yard completion to set the Packers up at the Dolphins’ 7-yard line.

AJ Dillon powered his way into the end zone just two plays after Rodgers’ deep pass to even the game early in the third quarter.

Dolphins defense gets the pick … but was there a PI?

Rodgers wanted it all on third-and-15, launching a pass to the end zone to Allen Lazard. Kader Kohou made the play to get the interception for the Dolphins though, but it appeared he might have gotten away with some contact.

On the play right after Rodgers’ interception, the Packers got the ball back when Tagovailoa threw the ball right at Jaire Alexander to give Green Bay great field position.

A gift for De’Vondre Campbell

Tagovailoa threw another interception right at the Packers linebacker as the Dolphins were driving to either tie or take the lead.

The Dolphins quarterback threw his third interception in his final three dries as his final pass of the game went straight to Rasul Douglas, sealing the 26-20 win for the Packers.