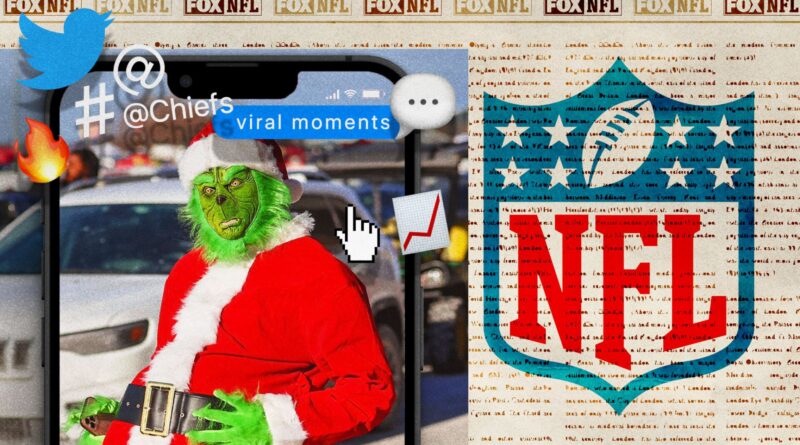 Christmas came early for NFL fans with an 11-game slate on Christmas Eve! Amid frigid temperatures across the country, the Chiefs took care of business against the Seahawks, the Bills pulled away late against the Bears in the Windy City and the Vikings once again survived a one-score game, edging the Giants in another matchup with big postseason implications.

Later, the Cowboys held off Gardner Minshew and the Eagles in an absolute thriller before the Raiders took on the Steelers to mark the 50th anniversary of the Immaculate Reception — and celebrate the life of the late Franco Harris.

Here are the top trending and viral moments from across the NFL on Christmas Eve!

Steelers pay homage to a legend

Steelers owner Art Rooney II presented Harris’s widow and son with his jersey in an emotional ceremony with Harris’s former teammates as Franco chants rained down in Pittsburgh.

Russell Westbrook in the house!

The Los Angeles Lakers star is in Arlington to watch the Cowboys take on the Eagles in a huge NFC East matchup.

The Cowboys are back in it!

The Cowboys get an interception of their own to swing momentum in the game.

Minshew takes it in himself!

Eagles go for it on 4th down… and Minshew connects for the touchdown!

Eagles strike back for the go-ahead touchdown!

… then tie the game thanks to Ceedee Lamb!

Eagles hold Cowboys to a field goal… then give the ball right back!

Eagles force another field goal, and drive down to the red zone for the win…

…but the Cowboys stop Minshew and hang on for the win!

You’re a mean one, Mr. Smith-Schuster!

Juju Smith-Schuster went all out pregame with a Grinchy costume that would make even the dastardly Whoville outcast himself smile.

About those shirtless Seahawks…

Patriots fan Jerry Edmund earned praise after the end of New England’s heartbreaking loss in Las Vegas last week as video of Edmund’s calm response to a Raiders fan berating him went viral. Patriots owner Robert Kraft saw the video and invited Edmond to be a guest of honor in his suite for Saturday’s game against the Bengals.

Side-step in the end zone!

Cincinnati was up 22-0, but New England has scored 18 unanswered to bring the game within one score.

All white in Minnesota

No snow on the ground in the Vikings’ indoor stadium, but still a whiteout up north:

Lionel Messi and his Argentina teammates would be proud of this penalty kick form from Vikings cornerback Patrick Peterson after Peterson picked off a pass from Daniel Jones.

This guy is not amused either and looks to be experiencing some big deja vu.

Minnesota’s new single-season receiving yards leader, on the other hand…

Of course, this is how Jamaal Williams stayed warm amid frigid temperatures in Carolina.

Carolina has surpassed 200 rushing yards in the first half for the first time in franchise history.

It’s all Panthers against Detroit as Brian Burns does his best superhero impression after a big sack on Jared Goff.

Williams has the right idea

Damarion Williams is a rookie defensive back from Miami. He knew where he wanted to be pregame in freezing Baltimore conditions.

A lead helps with the cold!

Ravens up 14-3 and this fan could not be happier, even in the cold.

Arthur Smith is not happy

With the Browns’ and Patriots’ losses, the Ravens are celebrating more than just the holidays this weekend after their win over the Falcons.

Five degrees at kickoff with a wind chill of close to -20? No problem for the Browns star.

The Browns’ social media admin, however …