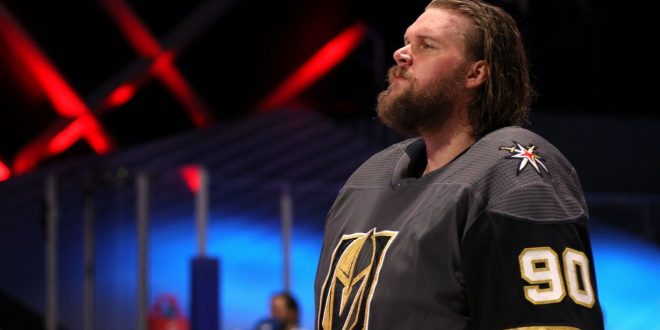 Vegas Golden Knights goaltender Robin Lehner said that NHL players were lied to by the NHL and NHLPA representatives about loosening restrictions after receiving the COVID-19 vaccine, a claim that has been disputed by the league.

“They told me yesterday that they’re surveying all the teams to see who has taken the vaccine, and who has not taken the vaccines, and they’re not going to change the rules for us as players until all the players have the vaccine at the same time so it’s not a competitive edge,” Lehner said in an impassioned news conference Wednesday. “That made me go crazy, to be honest. This is human lives and people are struggling with this stuff a lot in society, and we are humans as everyone else.”

Shortly after his remarks, Lehner tweeted: “As I’m frustrated like a lot of people in the world right now everything didn’t come out of today’s press in the right way. Main point is that we need to start take the mental health important as well in this situation. It has a huge impact on everyone in society right now.”

The NBA and MLB both implemented policies that state that when 85% of players and staff on a team are vaccinated, the leagues can ease restrictions when it comes to things such as gatherings or frequency of testing. Lehner said he was told the NHL would adopt a similar policy.

“That was a lie,” Lehner said. “A blatant lie.” Lehner said he spoke yesterday with NHLPA representatives, who had been in communication with the NHL.

NHL deputy commissioner Bill Daly, however, told ESPN that no such promises were made to players.

“It’s been a matter that’s been raised and discussed as between us and the NHLPA, but no decision to modify has ever been made nor communicated to anyone,” Daly said.

The NHLPA said it has been a difficult season, one in which it has had to enhance protocols. However, the organization said it has not advised players that there will be a direct link between taking the vaccine and immediately loosening protocols.

Lehner said he was given a sheet that explained the NBA’s benefits for their teams that reach vaccination thresholds. As Vegas players contemplated getting the vaccine or not, they were referred to those printouts of the NBA’s policy, according to Lehner.

Many teams in the United States have arranged for their players to get vaccination when eligible. The NHL and NHLPA are not mandating the vaccination but have recommended it to players. It is unclear how many players have been vaccinated.

Lehner, 29, has been open about his mental health; as an NHL player he was diagnosed with bipolar 1 disorder, as well as ADHD and post-traumatic stress that resulted from childhood trauma. The goaltender said that because of his bipolar 1 disorder, it has been recommended to him not to be isolated from others — which has been a struggle through the pandemic.

“We had a meeting when the season started in the beginning of camp, that pretty much told us, you can’t go outside of your house, can’t do anything, can’t go to the grocery store, can’t do nothing on the road, you can take a meal in the meal room but go sit in your room, don’t be with your teammates, don’t do this, don’t do that,” Lehner said.

“No one thinks about the mental impact. And there are people struggling. I know people will say, ‘Oh, you are millionaires, this and that, you’re crying, what about these guys?’ We care about that too, man. No matter what people think. This is a society problem. But when government, corporations, NHL, are taking decisions in terms of these irrelevant things like ‘competitive edge’ over the human being, it’s not OK, man.”

Earlier this season, several NHL players detailed to ESPN how this unusual and highly isolating season has affected their mental health. “If some guys are struggling, it’s adjusting to being so locked in indoors, either at home or at the rink,” Vancouver Canucks forward Tyler Motte said. “They don’t have outlets they’re used to having.”