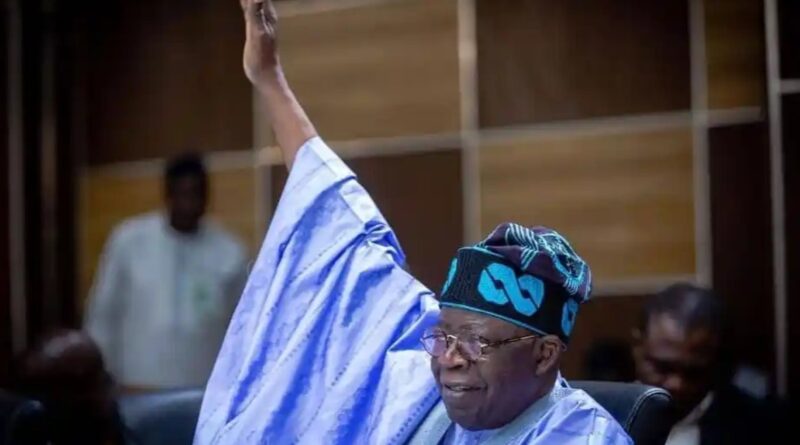 Abuja — Mr Tinubu made the announcement on Sunday while on a visit to President Muhammadu Buhari in Daura, Katsina State.

The presidential candidate of the ruling All Progressives Congress (APC), Bola Tinubu, has named Kashim Shettima as his running mate.

Mr Tinubu made the announcement on Sunday while on a visit to President Muhammadu Buhari in Daura, Katsina State.

The prospect of a Muslim/Muslim ticket has generated outrage from some quarters, even within the ruling party.

Despite the opposition, Mr Tinubu chose Mr Shettima as his running mate.

Shortly before the announcement of Mr Shettima, Ibrahim Masari, who had hitherto served as a ‘placeholder’ for the VP slot, announced his withdrawal from the position.

Mr Masari said he decided to withdraw from the position after he had a consultation with Mr Tinubu in a letter addressed to APC members.

The letter read: “This is to inform our esteemed party leaders under our able President, Major General Muhammadu Buhari (retd.), teeming party members and the great people of Nigeria, of the outcome of a crucial discussion I just had with the flagbearer of our great party, the APC, Bola Ahmed Tinubu.

“I had the singular honour and privilege of being nominated as the running mate to Asiwaju Tinubu last month after a keenly contested presidential primary ahead of the 2023 general election.

But, after much reflection and wider consultations, I now wish to step down. I realised that my decision will enable Asiwaju to have more latitude to give more accommodation and inclusion that will position our party to win the coming elections, with the support of the people of Nigeria.

“In stepping down, I believe I can still serve our party and the country in several other capacities.

“I wish to confirm that I have submitted my withdrawal letter and affidavit to that effect as the vice-presidential candidate to Asiwaju Bola TInubu in the coming elections.

“On behalf of myself and family, I wish to sincerely thank Asiwaju Tinubu — the incoming President, Insha Allah — for his trust in me and we promise to remain steadfast in our support for him and the party.”

The campaign organisation of Mr Tinubu also confirmed the withdrawal of Mr Masari.

In a statement released by James Faleke, the campaign disclosed that Mr Masari transmitted the resignation letter from Saudi Arabia, where he is performing Hajj.

“This is to inform and confirm that Alhaji Ibrahim Masari has stepped down as Vice Presidential nominee to the flag-bearer of APC in the 2023 presidential elections, Asiwaju Bola Ahmed Tinubu.

“Alhaji Masari has communicated his decision to us from Saudi Arabia where he is presently performing the hajj.

“While saluting Alhaji Masari’s sacrifice, we believe this will give Asiwaju Tinubu an opportunity to take a decision that will further enhance the chances of our great party in the 2023 elections.

From Campaign DG to VP choice.

Mr Shettima, who currently represents Borno Central in the Senate, served as governor of Borno from 2011 to 2019.

He is from the same geopolitical zone -North-east, as Atiku Abubakar, the candidate of the Peoples Democratic Party.

Mr Shettima was one of the early backers of the former governor of Lagos State for the ticket and served as the Director-General of the Tinubu Campaign Organisation.

In the build-up to the primary election, Mr Shettima caused a stir when he said Vice President Yemi Osinbajo is too nice to be a leader because nice people should be selling “Ice Cream”.

“Osinbajo is a good man. He is a nice man. But nice men don’t make a good leader. Nice men should be selling popcorn and ice cream.”

He, however, retracted the statement and noted that he was misquoted.

Aside from the issue of Muslim/Muslim ticket, Mr Tinubu faces questions about his health, academic qualifications, source of wealth and allegations of corruption.

Mr Tinubu returned to Nigeria on Saturday, after spending 12 days in France for undisclosed business, fueling speculations that the trip was a medical trip.