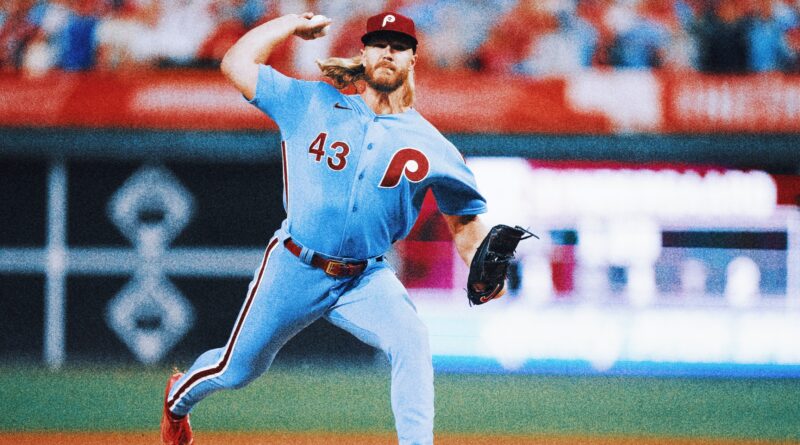 Noah Syndergaard compared the feeling to “trying to change the tires on a car while it’s still moving.”

It’s not that his 2022 season went poorly by most standards — he was 10-10 with a 3.94 ERA in a 2.3 fWAR season split between the Angels and Phillies — but he felt like he was fighting himself. The man dubbed “Thor” lacked his usual electrifying stuff, watching his velocity and strikeout rate dip and the confidence in his delivery fluctuate in his first full season coming off Tommy John surgery.

Now with the Dodgers, and with requisite time to fix the issues, he believes he can recapture his thunder.

“Whatever I was doing last year was not the best version of me,” Syndergaard said. “I see no excuse as to why I can’t get back to 100 mph and even farther than that.”

When the offseason began, he started throwing at Tread Athletics in North Carolina and going through motion capture at Driveline Baseball in Arizona to come up with a blueprint for the way he’d attack the offseason. His goal is to “hit the ground running” in Spring Training, which will also take place in Arizona for Syndergaard, who signed a one-year, $13 million contract with the Dodgers last week.

“I have the utmost confidence in the staff and the organization to help me get back to being the old me,” said Syndergaard, who is spending the holidays in Dallas before traveling back to Arizona on Dec. 27 to immediately start working at the Dodgers’ spring facility.

He is still trying to process exactly how and why things “went kind of haywire.”

Prior to his UCL repair in March 2020, Syndergaard’s velocity hadn’t dipped much. Despite a lengthy injury history, and while no longer pumping triple-digit heat as often as he did in his All-Star 2016 season, he was still averaging high-90s velocity through 2019.

He appeared on track to return to that form. Everything in his Tommy John recovery process seemed to be going smoothly for the first 14 months. Syndergaard recalled throwing 97 and 98 mph in his bullpen sessions. He was nearing a return when a setback occurred in May 2021.

Syndergaard was pulled from his second rehab start at Low-A St. Lucie. An MRI revealed inflammation in his elbow, shutting him down from throwing for six weeks. He would not return to a professional mound for another three months. His eventual 2021 Mets debut came on Sept. 28, nearly two years to the day of his last major league appearance. “Thor” lacked his usual voltage.

In two starts to end the 2021 season, Syndergaard averaged 94.2 mph on his four-seamer — a pitch that sat at 97.8 mph prior to surgery. He said he’s not sure if his body went into “fight or flight” mode to protect itself or if maybe he had overworked himself.

“I started going down a movement and pitching mechanics kind of rabbit hole and getting away from what made me great,” Syndergaard said. “When I had surgery, everyone was always telling me that I was too big or too bulky or too strong, so instead of continuing to do what made me really good and just chalk it up to, ‘Hey, it’s Tommy John surgery, a lot of pitchers, a lot of baseball players, go through that,’ I completely did an overhaul of my training program and my emphasis in the weight room. It was a lot of mobility, athleticism, and kind of shifted away from the strength and explosiveness.”

He was unable to regain his typical velocity in 2022, so he made use of what he had, instead featuring his sinker, slider and changeup. The slider had long been his primary strikeout pitch, and he used it a career-high 22.4% last season. Opponents hit .316 against his four-seam fastball, which he threw a career-low 14.9% of the time. The hardest pitch he threw was 96.4 mph.

But he doesn’t anticipate more of the same in 2023.

“The pitches I threw last year, I just want to kind of throw those away,” Syndergaard said. “I fully intend on being a different pitcher this next year, so I haven’t really paid attention to keeping those pitch shapes.”

While he didn’t resemble his All-Star form, he did enough last season to capture the interest of free-agent suitors. He picked the Dodgers in part because of their ability to help pitchers find their peak form.

Last year, it was in Los Angeles where 32-year-old Tyler Anderson made his first All-Star team, where Andrew Heaney posted career bests in ERA (3.10) and strikeout rate (35.5%) and where reliever Chris Martin registered a 1.46 ERA and 0.53 WHIP in 26 appearances. All three pitchers parlayed their success into multi-year deals elsewhere this offseason.

“I think when you think of the Los Angeles Dodgers, it has, like, this aura around it, where the expectations are super high, and you’re expected to go out there and perform to the highest level,” Syndergaard said. “What they did with Heaney last year and Tyler Anderson, I definitely want to be in that category.”

Syndergaard was also enticed by the energy of the fans in Los Angeles and his success at Dodger Stadium, where his stuff tends to play up. He allowed one run in 4.2 innings in his lone start at the venue last season. Two of his eight fastest pitches all year occurred during that start. In four career appearances at Dodger Stadium, he has held opponents to a .189/.255/.367 slash line.

“I feel like my performance is always elevated when I play there,” he said. “Even this year, when I had a down year based off my expectations and my standards, I still feel like the one start I had at Dodger Stadium was still some of the best stuff I’ve had.”

He expects more of that with the Dodgers in 2022.

“I feel like everything they touch,” Syndergaard said, “turns to gold.”

Rowan Kavner covers the Dodgers and NL West for FOX Sports. He previously was the Dodgers’ editor of digital and print publications. Follow him on Twitter at @RowanKavner.