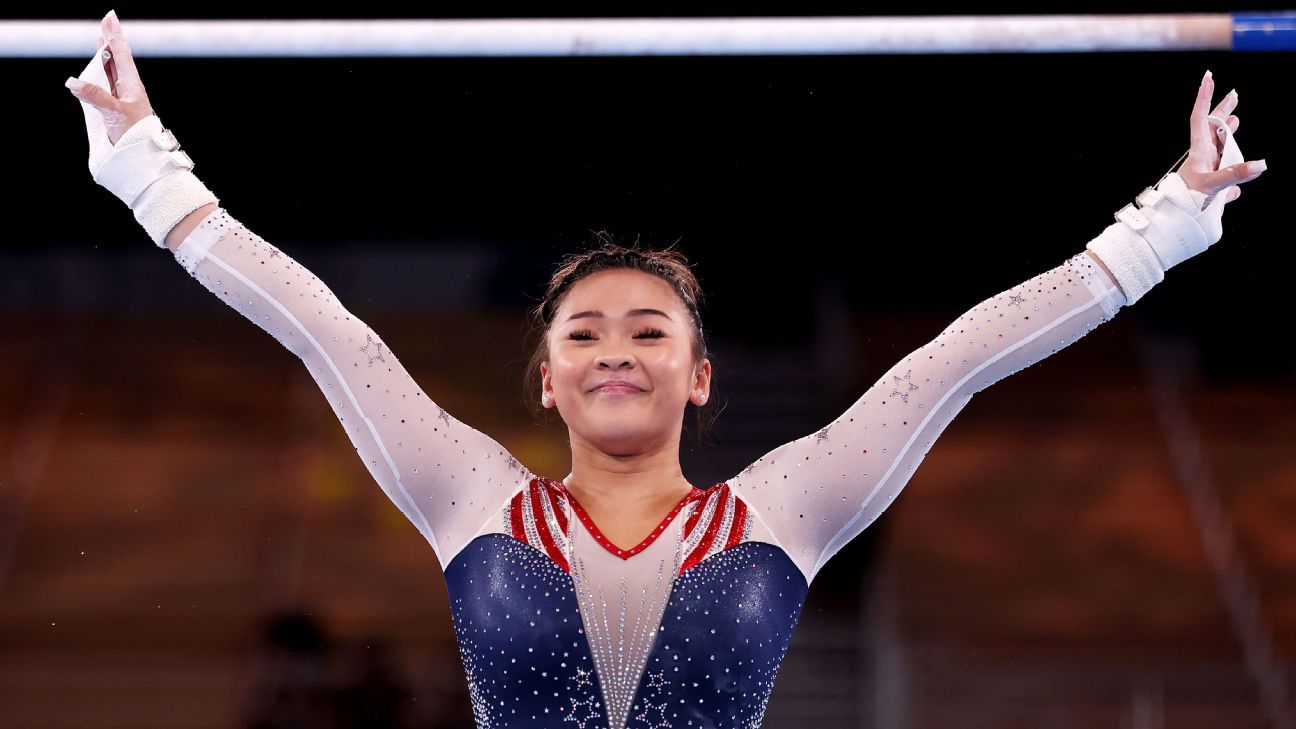 On Sunday, newly crowned Olympic all-around champ Suni Lee will compete for the gold medal on uneven bars. The American could do it — but it should be a very hotly contested final in the Tokyo Olympics.

With Saturday’s news that Simone Biles is out of both the vault and bars finals followed by Sunday’s news that she is pulling out of the floor exercise, the vault competition now will be wide open, with Americans MyKayla Skinner and Jade Carey in an epic battle for the podium. On the men’s side, the United States’ Yul Moldauer will compete on floor and Alec Yoder on pommel horse.

It all starts at 4 a.m. ET — and we’ve got all the action below with live updates throughout.

Which events, how does it work and what’s the schedule?

Sunday is the first day of individual event finals, and it will be a combination of men’s and women’s events. The top eight highest-scoring gymnasts from qualifying advanced on each event, with a maximum of two per country. The preliminary scores are now erased, however. The highest score on Sunday wins.

The schedule — you might want some coffee for this one:

Who will win each event?

Men’s floor: Israeli gymnast Artem Dolgopyat was the top qualifier with a 15.200 score, but third-place gymnast Ryu Sunghyun of South Korea had a 15.066, and with the highest difficulty score (6.9), it could give him the edge if everyone hits. American Yul Moldauer qualified in sixth, but with the lowest difficulty score of the field, it’ll be a stretch for him to end up on the podium.

Women’s vault: With the withdrawal of defending Olympic vault champion and two-time world vault champ Simone Biles, women’s vault could be very suspenseful. American MyKayla Skinner is taking Biles’ spot, and she and fellow American Jade Carey were tied for the highest difficulty totals in qualifying. Either could win gold, though Skinner’s execution scores were lower than Carey’s in the preliminary round. All-around silver medalist Rebeca Andrade scored between Carey and Skinner in qualifying, and she should be considered a favorite as well.

Men’s pommel horse: The American men’s best hope for an Olympic medal comes on this event, with Alec Yoder, a pommel horse specialist, qualifying in fourth. It should be noted, though, that the top three qualifiers (Chinese Taipei’s Lee Chih-kai, Ireland’s Rhys McClenaghan and Japan’s Kohei Kameyama) all tied with a 15.266, and Yoder scored a 15.200. It could be anyone’s gold here.

Women’s uneven bars: Suni Lee was second in preliminaries and has a real chance at the gold here, especially since she didn’t perform her full difficulty on that day. Unfortunately for her, she was drawn to compete first, which is considered a disadvantage in scoring. Watch to see if she connects all of her early release moves. If she does, she has the highest difficulty score in the group.

Belgium’s Nina Derwael was the top qualifier, is a two-time world champion on bars and is probably Lee’s biggest threat in the event, but top to bottom, this entire lineup is stacked. Biles had qualified in the final spot; she will be replaced by France’s Melanie de Jesus dos Santos. — Amy Van Deusen

Looks like I get to put a competition Leo on just one more time. Can’t wait to compete in vault finals. Doing this for us @Simone_Biles ❤️ It’s go time baby!

Can you tell me more about the Americans?

Why, yes, we can. You’ve probably heard of Suni Lee by now, but even if you haven’t, check out this story on her impressive all-around win on Thursday. Bonus: There is a must-see video of her and her dad doing backflips. Trust us and go take a look.

Jade Carey and MyKayla Skinner both qualified to Tokyo as individual competitors, and both have had wild rides during this Olympics. Skinner thought her Olympic experience was over after the qualifying rounds, while Carey took Biles’ spot in the all-around when Biles withdrew.