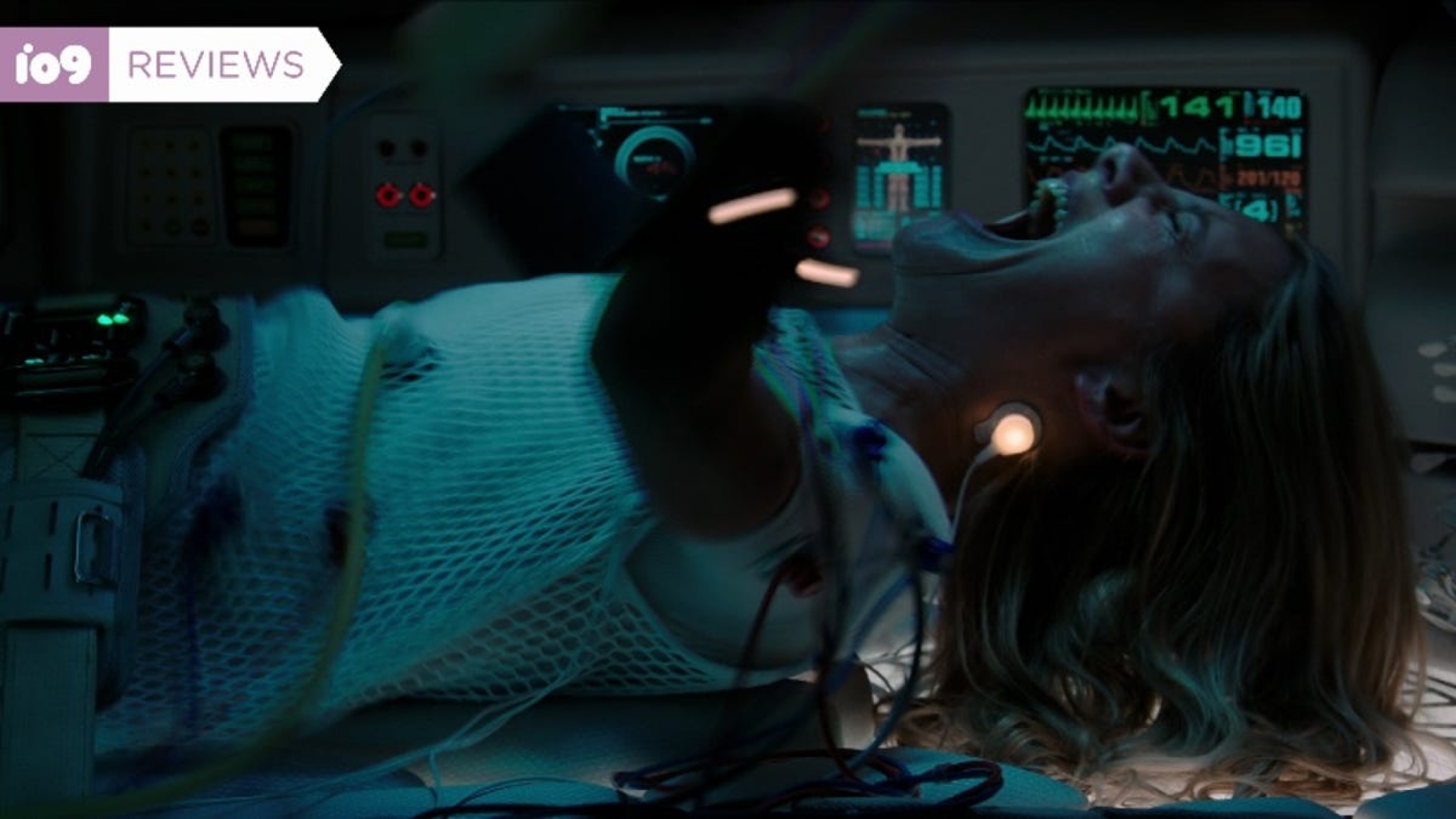 Don’t let the fact that Oxygen is about a woman stuck in place for two hours fool you. The claustrophobic setting provides more twists and turns than most films with the whole world at their disposal. Directed by Alexandre Aja (Crawl, The Hills Have Eyes), the film stars Mélanie Laurent (Inglourious Basterds) as a mysterious woman with temporary amnesia who eventually realizes her name is Liz. Liz is in a mysterious high-tech medical enclosure with all matter of tubes and needles sticking in her and only 35% of her oxygen supply remaining. Nope. Wait. 34%. Now 33%. You get the idea.

Most of Oxygen is Liz talking to herself or her medical computer named MILO (voiced by Quantum of Solace’s Mathieu Amalric), trying to figure out what the heck is going on. MILO provides mostly bad news as Liz slowly starts to piece together who she is, where she is, why she’s there, and how to get help. Is she in a hospital? Is she buried underground? What happens if she tries to get out? These are all questions that come up pretty quickly in the movie.

I’m not going to answer them here, though. While Oxygen does have strong themes about appreciation of life, love, and nature, that’s not what makes it so compelling. It’s the non-stop avalanche of revelations. Since the parts of the movie taking place in the present are confined to this tight space, the audience is very much put in Liz’s shoes. The audience becomes tremendously invested in her quest for escape. With each tiny action towards the truth that she deduces or performs, another layer of mystery is revealed. Some of these actions are rather obvious and unoriginal. Others are more surprising and unique. But from the first minutes of the film every single morsel of plot that’s revealed in this manner feels significant in the absence of any other action.

All of which is interspersed with Liz’s desperate attempts to recover her memories, resulting in some fleeting, dream-like pop-up flashbacks. She glimpses a career, a husband, a family. And Aja does a beautiful job balancing those scenes with the ones inside the compartment. Whenever the film gets purposefully frustrating, agitating, or claustrophobic, things open up just a bit by peering into the past, before going right back to normal in the present. The cinematography, editing, and music play big roles in differentiating the times too, with more color, quicker cuts, and bombastic tunes. None of those elements would matter if not for Laurent’s performance. As Liz, she has to go through a wide spectrum of emotion with nothing but her voice and face to guide us, because she’s stuck in this confined space. And she conveys that myriad of emotions incredibly well, keeping us sympathetic and engaged all the way through.

Another cool wrinkle in Oxygen is the unreliability of the narrative. Everything is built on these increasing revelations and, occasionally, those revelations prove to be untrue. Or true but only from a certain point of view. And we’re left questioning all the events that happened or are happening, until finally, the truths of Liz’s situation solidify near the end of the movie.

Oxygen isn’t the most original movie, but it’s a captivating story, told in a beautiful, entertaining manner. That it’s a Netflix original is also fairly appropriate because like Liz, viewers also become captives (though in their own homes), desperate for each new revelation.

Oxygen is now on Netflix.