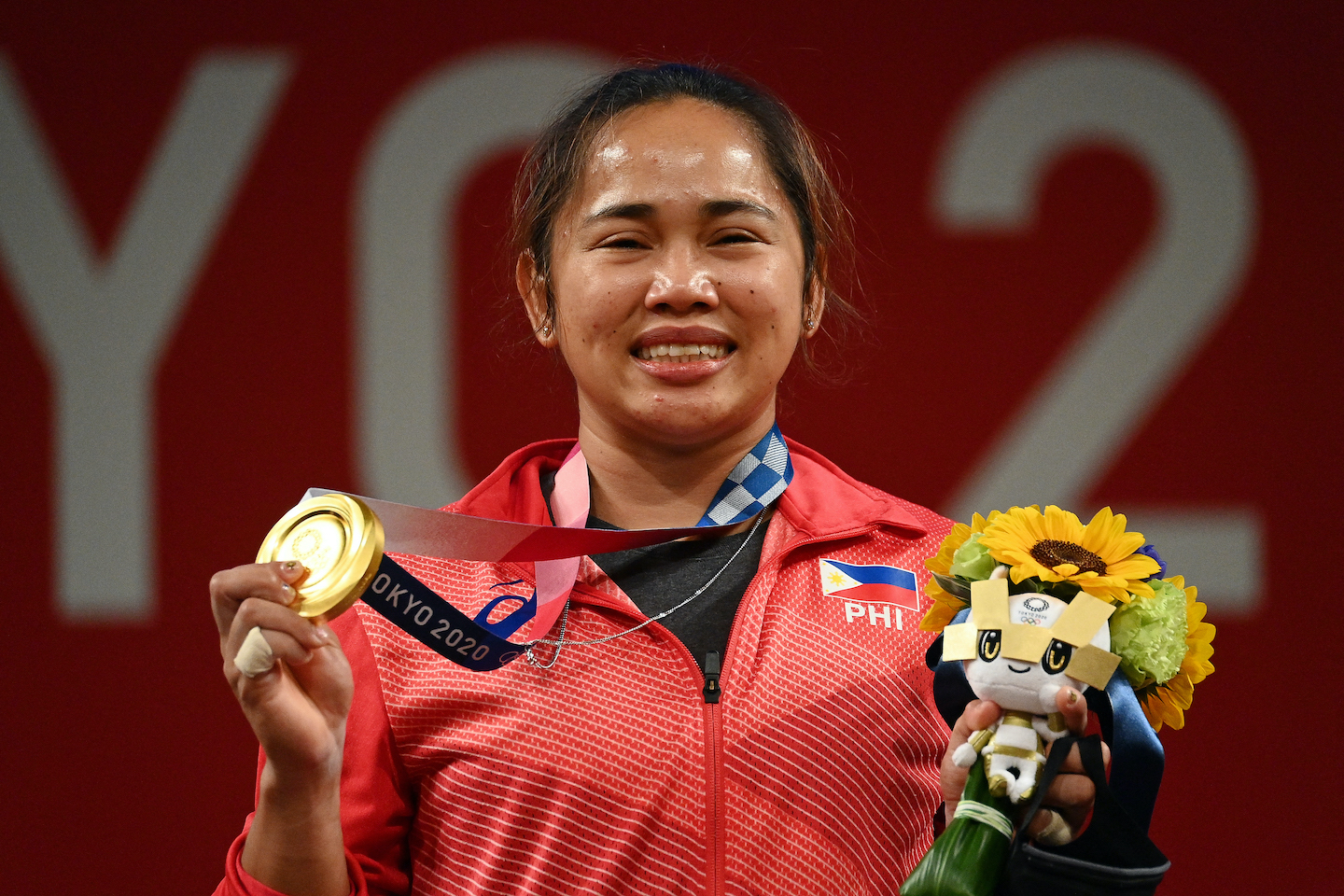 Gold medallist Hidilyn Diaz stands on the podium for the victory ceremony of the women’s 55kg weightlifting competition during the Tokyo 2020 Olympic Games at the Tokyo International Forum in Tokyo on July 26, 2021. Photo: Vincenzo PINTO / AFP

The timing was impeccable. She competed just minutes after Philippine President Rodrigo Duterte finished his final, three-hour long State of the Nation Address.

Hidilyn Diaz, 30, walked on the weightlifting stage in Tokyo with calm and composure in her blue uniform with “Philippines” emblazoned boldly in front. She needed to complete a clean and jerk of 127 kilograms in order to best Liao Qiuyun, her competitor from China, to win the gold.

Not only did Diaz complete it, she also set a new Olympic record.

As soon as she dropped the barbell, an ecstatic Diaz clasped her hands together and screamed for joy, along with the thousands of Philippine audiences watching from behind their screens. She had brought home her country’s first-ever Olympic gold medal.

The Philippines competed in all but one Summer Olympic Games since 1924 but before Monday, the gold had remained elusive. The country had three silvers and seven bronze medals before Diaz’s latest win. Her victory at Tokyo 2020 follows her other historic achievement of ending the Philippines’ 20-year Olympic medal drought after winning a silver medal in Rio in 2016.

The celebrations were swift and pervasive. On social media, her name became Twitter’s top trending topic within minutes, and continued to be over 12 hours later. Instagram feeds were flooded with photos of her. News websites bannered her victory, the lead story drowning out Duterte’s address, which critics dismissed as having lacked substance and vision. This, as the Philippine national anthem played in the Olympics for the first time, with Diaz holding back tears behind her black mask.

In her first interview right after her win, Diaz was visibly emotional.

“I can’t believe it,” she said. “I surprised myself that I was able to do it.” It was the first time Diaz herself was able to lift that amount of weight, failing to do so when she attempted it in practice.

“Thanks so much for believing in me,” she told her supporters. “During the times I wanted to give up because of all the challenges I faced, we did it. We Filipinos can do it.”

And indeed there were many challenges to get to where she was.

Just like the other competitors, the pandemic’s delay meant another year of training and discipline. But Diaz’s story goes way back. She first competed in the 2008 Beijing Olympics, and again in London 2012. She did not win a medal in either of those competitions. Her breakthrough came in 2016 after she won a silver medal in Rio, becoming the first-ever woman athlete from the Philippines to do so. And finally, on her fourth appearance, she snatched the gold that has long eluded the country.

It wasn’t easy. Diaz struggled to find funding, appealing to private companies to support her training throughout the years. And, in a shocking twist, the Duterte government had tagged her in a list released in 2019, accusing her of being part of a plot to discredit the administration purportedly after Diaz said she lacked financial support. At that time, Diaz was training for the Tokyo games, but said she feared for her life, and that of her family.

“Please do not link somebody who is busy making sacrifices for everyone, for the Philippines. I am merely doing my best to represent the Philippines in weightlifting,” she said.

In her post-win interview, Diaz mentioned her inclusion on that list as one of the challenges she faced, signaling it had made an impact. In the end, her win overshadowed even the Philippine president himself on an important day for his administration. Neither the list, nor any of the other obstacles succeeded in halting her dreams.

“To be honest, I was nervous. What if I couldn’t do it? But the whole day, the whole week I told myself, ‘I believe. I believe,’” she said.

The Olympic victory was especially sweet against the backdrop of the Philippines’ recent social and political environment.

Government threats against critics have become common under Duterte’s administration, but netizens were also quick to point out that her win was all the more inspiring coming from a woman, after many years of sexist comments and behavior from the country’s leadership.

That she is a woman was significant. In a country that consistently roots for beauty queens and where many young girls aspire to join pageantry, Diaz, a strong, competitive athlete, gave young Filipinos a new role model. Diaz did not only show what women can achieve on the global sporting stage, she also managed to introduce the country to a sport that many Filipinos have not had exposure to.

In the basketball-crazed nation, only the likes of boxing (thanks to Manny Pacquiao) and a handful of sports (there are less than ten professional sporting leagues in the country) get the bulk of the attention.

Amid a raging pandemic, her victory was a welcome respite and a source of joy for a country whose president had a few hours earlier admitted he did not know how to handle the threat of the new Delta variant. The Philippines has had one of the worst outbreaks in Southeast Asia, recording a total of more than 1.5 million cases.

Perhaps most importantly, the win united a country recently divided by politics. For a brief moment after Diaz’s victory, political lines and differences did not matter. Only Hidilyn Diaz, and the triumph of a Filipino, did.