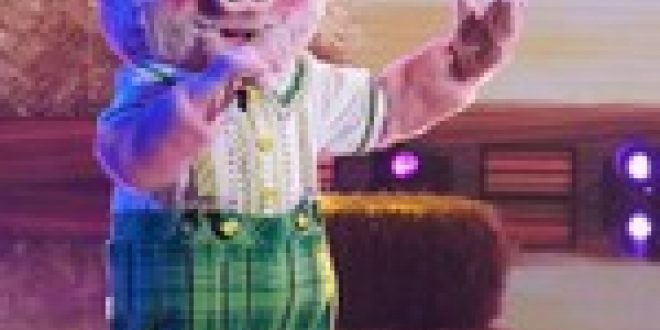 Piglet Wins Season 5 of ‘Masked Singer’: ‘I Tried to Be as Silly & Ridiculous As I Could’

If you were paying attention all along, though, it seemed pretty obvious from the beginning that Piglet was on his way to a victory. Among his standout performances were Dan + Shay’s “Speechless,” Lewis Capaldi’s emotional “Bruises,” a tear-jerker “Against All Odds” by Phil Collins, Lukas Graham’s “7 Years,” the praiseworthy “Good to Be Alive (Hallelujah)” by Andy Grammer and a rumble to the rock side for the Foo Fighters’ “The Pretender.”

It was his final song, though, that got the panel, and the former boy band singer, all choked up, even as panelist Ken Jeong once again proved that his picker is on another planet by hoisting wildly improbable Avengers: Endgame star Jeremy Renner as his final guess. Jenny McCarthy Wahlberg and Rimes totally nailed it, with Rimes saying she could even hear the singer’s speaking voice in his vocals.

So after 11 weeks of surprises — from Kermit the Frog to Bobby Brown, Caitlyn Jenner, Danny Trejo, Logan Paul, Nick Cannon, Tyrese, Tamera Mowry-Housley to triple threat Hanson and Omarion — the show’s second pandemic-affected season sizzled to a close with Piglet being unmasked as none other than reality TV star and 98 Degrees co-founder Nick Lachey.

He beat out Chameleon (Wiz Khalifa) and Black Swan (JoJo), who put up a good fight only to fall to the Cincinnati Kid.

Billboard spoke with Lachey before his win to find out how he ended up covered in pork, why he approached the show like a Little League coach and what advice Dave Grohl gave him.

The clues seemed pretty obvious all along, with notes of being unlucky in love and the world seeing your heartbreak. Were  you even trying to hide it?

I think it’s a fine line. You don’t know when the production crew are building the clue packages, especially in the beginning, it’s hard to know how obvious your voice is going to sound. As the season went on we tried to be more coy about it to throw people off. I had a feeling just because I’ve worked with everyone on some level on that judging panel that it was just a matter of time before they recognized my voice. We put some things in later about football to try and throw them off. I didn’t really look at it as, “hey I have to get through this whole season with nobody knowing who I am.” As a singer I just have to do what I do and if they figure it out.

Is it true that your kids said you should be a piglet on the show? I mean, as a fellow Cincinnatian, it felt pretty spot-on since our town was known as Porkopolis.

Ironically, they presented the pig costume to me and because I’m from Cincinnati — my production company is called Flying Pig Productions — and you know… Porkopolis… it just resonated with me from the beginning, like, “Hey, this is meant to be!” And then my wife, knowing that I was gonna do it, while I was away asked my kids what kind of costume I should have. I think my daughter said a goat or something and my son said, “he should be a pig.” And I said, “this is crazy, it’s definitely meant to be.” Of all the animals he could have pulled out of the hat it was a pig.

You said you were looking for a chance to be a “total idiot.” Did you succeed?

[Laughs]. I definitely tried to give the pig some life. I was talking to Joey Fatone who had done the first season and is a good buddy and he said, “Hey man, if you do this you have to give the character some personality and really go for it.” And that’s a big part of it. Performance is the crux of the show, but also giving the characters a life and personality is part of it as well.

It seemed like the costume allowed you to be way sillier than we’re used to. Was that how it felt?

Yeah, exactly. I tried to be as silly and ridiculous as I could. I was standing up there in a pig costume for Pete’s sake! You can’t take yourself too seriously in that in that moment.

Nicole said you seemed to want it the most. Did you go there to win? I’ve heard you’re a bit competitive.

I don’t like to go into anything planning to lose, but I also envision what I’m telling my son on the baseball field: as long as you’re giving your best effort daddy can never be mad at that. The outcome doesn’t matter as long as you’re giving your best. That’s how I looked at this, be what I tell my kids to be. Give it all I got, leave it all out there and then accept the result, don’t be a sore loser. I wanted to make it to the finals and then whatever outcome happens… the other thing about it is you don’t know who else is on the show and who you’re competing against. You don’t know if you’re the best singer out there, the worst singer out there. It’s really unique in that way.

The guesses were pretty close, but also kind of ridiculous: almost every member of Backstreet Boys and *NSYNC — but not 98 Degrees– most of the men from Twilight, Adam Lambert, Zayn, Adam Levine and, of course, you. Were you surprised?

Yeah, especially [the guesses] from Ken. “Where in the world are you getting this from?!” I just tried my hardest up there but you really have no clue so it’s got to be tough to be a judge on that show. But it’s a trip to be up there after a performance, sweating, hyperventilating and listening to them make these sometimes ridiculous guesses. You just want to sometimes take your mask off and be like, “what are you…??!?”

Your voice is so unmistakable. How quickly did you hear from your family, friends and bandmates after your first episode?

My grandma was like, “I think Nick might be doing this show,” and my mom called me and I was like, “I don’t know…” I had to play dumb, but when you perform with your brother on an almost daily basis for years and years he definitely picked up on that fact that it was me. Again, I worked with a lot of the panel. Robin Thick’s written songs for us and we know each other and I worked for two years on The Sing-Off with Nicole, I toured with the New Kids [On the Block] when Jenny was with Donnie… I didn’t necessarily think I was going to make it through the whole season without them knowing who I was.

This isn’t your first reality TV go-round. You produced MTV’s Taking the Stage about your alma mater here in Cincinnati, you mentioned The Sing-Off, you appeared on Drop the Mic and Dancing With the Stars. Was this the weirdest one of the bunch?

Dancing with the Stars was weird for me because I can’t dance, so it felt almost completely foreign. This was more comfortable because I felt like something I’m used to doing and feel like I can do. But performing in the costume was definitely the weirdest thing and the most challenging and, ultimately the most rewarding. Because you have to figure out a way to overcome those challenges the costume and mask present. There was a time early on when I wasn’t sure I could do it. It was really hard to sing and hard to breathe. I had an ice vest they gave me initially and I said lose the ice vest I can’t breathe in it, I’d rather be hot… it was almost like re-learning how to perform.

How fun was it to break out of the box and sing the Foo Fighters? And “Hallelujah” looked like about as much fun as I’ve seen you have onstage in years.

I grew up going to a performing arts school there in Cincy, we did opera and different stuff and this was a chance to show off a bit of range. Plus, you don’t want to go down the same lane the whole time, you want to show different sides of you voice… It was great to be able to go on stage every week and sing great songs by great artists and really try and stretch yourself. I thought if I had a chance of winning I had to prove I was more than just some balladeer that was just going to sing love songs… Dave Grohl and I know each other because our kids went to preschool together I called him up and said, “Hey I really want to sing ‘Pretender’ on the show, would you bless it?” And he said, “yeah, but you gotta kill it!”

It seemed like you got a bit choked up and got the judges misty too with your last performance of “Faithfully.” What was going through your mind?

I was really worried I wouldn’t be able to get through that song. You come to the end of the journey and you think about what we do as performers — we’re gone a lot and you can’t do that or a show like this without the support of your family — my family is everything to me, paramount in my life, so I was really concerned I’d be in the middle of that song and not be able to do it because it is an emotional song for me… The Lukas Graham song was another one that was very emotional for me because of my relationship with my son and my dad. Even if you’re in a pig costume it doesn’t change the crux of what that song is about.

It sounds like this is the kick-off of a summer of 98 Degrees?

Yeah, we’re doing this campaign [called] 98 Days of Summer that is going to lead toward a new single coming out on July 9th called “Where Do You Want To Go.” And we’ve got other new music we recorded and more music we’re going to record later this summer. We’ve also done a remix album of all the classic 98 hits. After a year of being on th shelf and not able to do anything we were anxious to get back together to record some new stuff and give our fans some new stuff to get excited about. We’ve got some shows confirmed for later this year and shows throughout the fall and we’ll definitely be touring through next year, as will every other artist! [laughs]