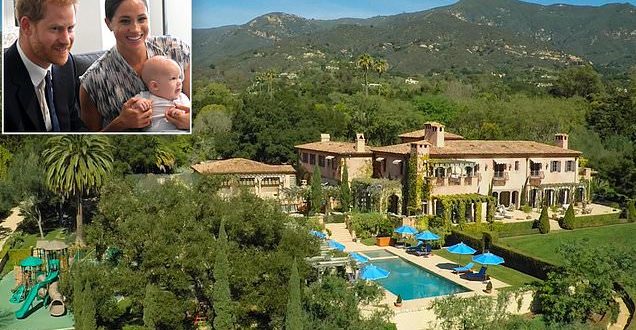 This is the sprawling California estate snapped up by Prince Harry and Meghan Markle – making them neighbors with celebs Oprah Winfrey and Ellen DeGeneres.

Santa Barbara property documents show the sprawling nine-bedroom and 16-bathroom mansion in upscale Montecito was bought on June 18 for an eye-watering $14,650,000. The 14,563-square-foot home sits on 5.4 acres of land and immaculately clipped hedges border the estate’s stone-pillared entry gates.

According to Zillow, the entrance opens onto a wide lane paved with hand-cut Santa Barbara Stone that leads through a grand archway of trees to the main residence. The main house includes a library, office, spa with a separate dry and wet sauna, gym, game room, arcade, theater, wine cellar and five-car garage.

The home sits on a private road in an exclusive area of Santa Barbara, home to many celebrities

According to Zillow, the house has been updated with the latest Lutron lighting systems and Crestron, including iPad control.

The property is located on a private road in a luxury and secluded estate in Montecito. Almost every house in the multi-million dollar neighborhood is designed for privacy, with long driveways and large gates.

Harry and Meghan have bought the luxury property despite still owing the British taxpayer £2.4million ($3.1million) for the renovation of Frogmore Cottage, their former home near Windsor Castle.

The pair have agreed to pay £18,000 ($24,000) a month to repay the cost of refurbishing the cottage, and royal expert Ingrid Seward told DailyMail.com that the new expenditure was ‘not going to be looked at very favorably’.

Royal insiders said yesterday that Harry and Meghan purchased the home with help from Prince Charles.

A source said: ‘Charles had been keen to help out and put his hand in his own pocket to assist. He is devoted to both his sons and any time he can assist them he always will’. Clarence House declined to comment.

However, a different source refuted those claims – telling Page Six that Harry and Meghan had ‘bought this house without help from [the royal] family’.

‘Meghan and Harry finally feel like they are on their own, and it feels great. It’s truly theirs and they can’t wait to make it a home,’ the source said. .

The home boasts a tennis court, tea house, children’s cottage and a pool, among other amenities

Harry and Meghan have moved into a star-studded neighborhood

The sprawling estate sits on 5.4 acres

At their peak Harry and Meghan’s combined wealth had been estimated to be worth around $43million.

Leading luxury real estate broker Jason Streatfeild, who has an office in Montecito, told DailyMail.com Harry and Meghan will fit straight into the community.

‘It’s the type of neighborhood where you may not realize who your neighbor is but you really don’t care,’ he said.

‘It’s not unusual to run into Oprah Winfrey at the grocery store or to be sitting next to Ellen DeGeneres for lunch at the Miramar Hotel.

‘It’s a very private and exclusive area, a place where you can escape with an ocean in front of you and the mountains behind you.

‘We’re about 90 minutes north of Los Angeles and about four hours south of San Francisco – a unique south facing coastal community that has the channel islands directly in front of us.

‘We have a wonderful climate, calm waters and it’s just a very laid back health orientated community with plenty to do outdoors.’

Streatfeild, 39, who runs a team of five agents in Montecito for the Douglas Elliman real estate firm, said there’s also plenty of shopping and great places to eat.

‘Harry and Meghan coming here will certainly create a buzz, but then we’re used to celebrities here.’

Harry and Meghan have gotten a steal, as their new home initially sold in 2009 for over $25million

Neighbors told DailyMail.com they had not seen the Sussexes, saying that residents on the private roads often kept to themselves. The former royal couple enjoyed walking in the parks near their previous temporary residence on Vancouver Island, Canada, and their new home is just a few minutes walk away from a canyon trail frequented by hikers lapping up the Southern California sunshine – albeit with COVID-19 face masks.

Despite its huge price tag, the house is a steal compared to its previous selling price. A previous owner bought the property in May 2009 for over $25million.

Hoping to turn a profit, it was listed by Sotheby’s six years later for $34.5 million, but had no takers.

Page Six reported that the couple have lived in Santa Barbara for the past six weeks.