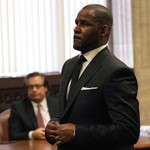 An invite from Kelly to audition for him as a singer followed. She met up with him a few days after the show, initially telling him she was 18 despite being 17. During the “audition,” Jane Doe # 5 says Kelly sexually pursued her, eventually coercing her into receiving oral sex, and promised to “take care of [her] for life.”

After this initial one-on-one, Kelly’s assistant, Cheryl Mack, allegedly booked a number of plane tickets for Jane Doe #5, despite knowing her age, to visit Kelly throughout his tour stops. When they first had sex, it was without protection and the R&B singer did not disclose his STD. She soon began staying at his home in Atlanta, where he continued laying down rules, demanding she get permission from Kelly or an assistant before leaving a room, calling him “daddy,” making her urinate in a cup and directing her on what to wear.

Jane Doe #5 testified he and Kelly had sex almost every day during the summer of 2015, and he made recordings of their sexual encounters “almost immediately.” She described one particular incident to the court that involved Kelly sexually humiliating her in front of his stylist. She first realized she had contracted herpes from him in Connecticut when she was 17; “I couldn’t physically even walk,” she said of the pain. “I felt this man had purposely given me something he knew he had,” she said between tears.

After making her delete her social media accounts, he allegedly presented her with even more rules, which included, “Stop defending myself” and “tell daddy [the defendant] one thing I appreciate about him.” On Sept. 19, 2015, Kelly and Jane Doe #5 received a letter of consent from her mother allowing the 17-year-old to live with Kelly and be home schooled with him in Chicago. This came after the defendant allegedly slapped Jane Doe #5 with an open palm when she revealed her age to him at a park in Chicago.

She testified that the defendant recorded them having sex at various tour stops he had her flown out to, a potential violation of the Mann Act, which makes it a felony to transport “any woman or girl for the purpose of prostitution or debauchery, or for any other immoral purpose” over state lines. In Oct. 2015, Jane Doe #5 believed she was pregnant. “He wanted me to get an abortion so I would keep my body tight,” she said. “He expressed to me that if I had been any other age, he would’ve wanted to start a family.” (While she did not turn out to be pregnant, Jane Doe #5 did, in fact, become pregnant by the defendant in 2017 and had an abortion, orchestrated by his assistant, under pressure from him.)

While living in a house with several other women also involved in sexual relationships with the defendant, she was introduced to “chastisings”: “He would spank me [if I didn’t follow rules].” In one instance, she bought a clothing item that wasn’t to his size specifications and was left in a room for three-to-four days until she apologized. The door wasn’t locked but she said she feared repercussions, as she had seen him “drag [other live-in women] by their hair,” throw shoes at them and hit them.

She also testified he mentioned his marriage to Aaliyah multiple times. When one of his live-in girlfriends asked why he married the late singer when she was 15, Kelly responded that Aaliyah found out she was pregnant by him, and as a minor, he had to marry her to accompany her to get an abortion.

Jane Doe #5 testified that Kelly had his girlfriends write multiple letters to “exploit us to protect him,” instructing them to write apologies for stealing from him and write about being molested by their family members, all of which was untrue. One of his live-in girlfriends, known as “Juice,” would check the signatures on the letters to make sure they matched the signatures on their government IDs, after which Kelly would give the letters to his attorneys. Jane Doe #5 was also involved in video “punishments,” which included him directing her to describe a false incident of her father molesting her, which she did on camera after he had her in tears from more than a dozen open-handed spankings. He also made her eat feces and pretend to enjoy it as a “punishment”; initially displeased with her on-camera enthusiasm, he asked her to re-shoot it, which she refused.

Kelly was arrested more than two years ago and has pleaded not guilty to the charges. If convicted on all counts, he faces 10 years to life in prison.