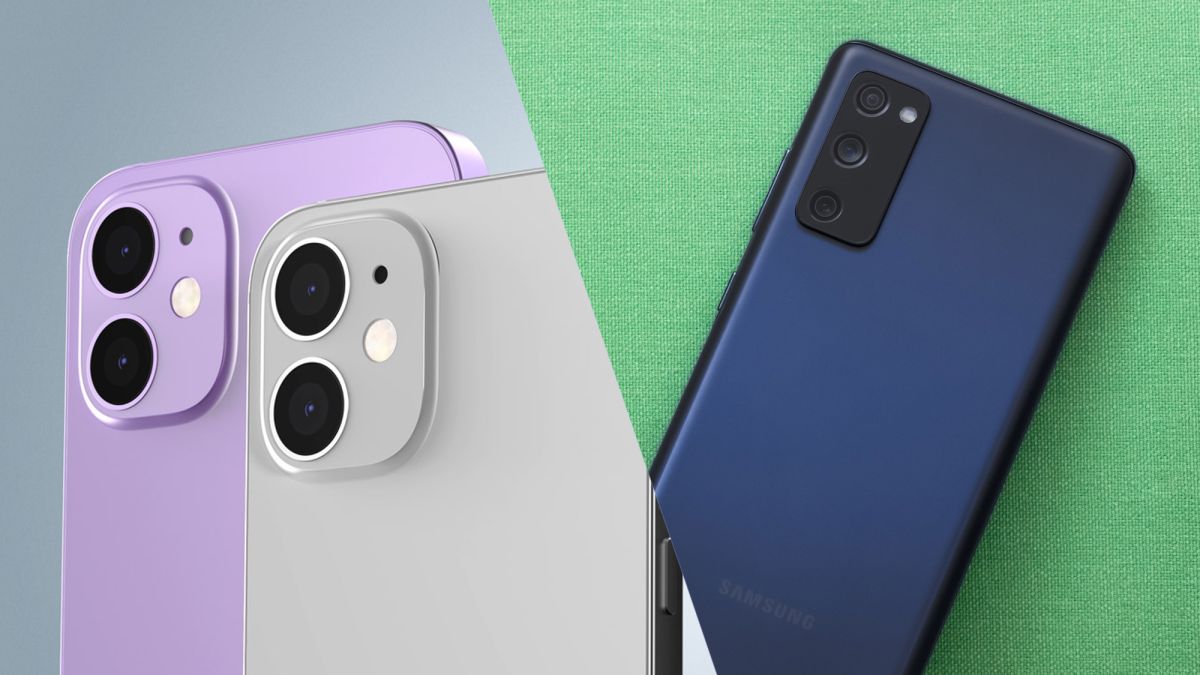 Samsung may tout the Galaxy S20 FE as an extension of the Galaxy S20 lineup it introduced earlier this spring. But the timing of the release of the new phone seems designed with one rival in mind — Apple’s iPhone.

After all, since the Galaxy S20 FE adopts many of the same features found in the standard S20 — our Galaxy S20 FE vs. Galaxy S20 face-off found the two phones to be almost interchangeable in all but a handful of ways — releasing a $699 phone with flagship specs seems like a perfect way to undercut any rivals. And there’s no bigger rival in the smartphone world than the iPhone.

Apple will have its own response to the Galaxy S20 FE shortly. The iPhone 12 is expected to make its debut in October, not longer after Samsung’s new phone will go on sale. And that sets up quite a showdown between the Samsung Galaxy S20 FE vs. iPhone 12 to see which offers the most to smartphone shoppers wary of $1,000 devices.

At this point, we only have iPhone 12 rumors to go by, but they paint a clear enough picture to predict how Apple’s new phone will compare to the Galaxy S20 FE.

Samsung has thrown down an early marker with the Galaxy S20 FE. While many of Samsung’s flagship phones have been on the high side of the $1,000 threshold as of late, the FE goes in the other direction. It starts at $699 for a phone with 6GB of memory and 128GB of storage.

We won’t know Apple’s official pricing for the iPhone 12 until the phones are announced, but rumors combined with what Apple charges for its current iPhone lineup give us a pretty good indicator of what to expect. The iPhone 11 — the most comparable model to the Galaxy S20 FE — also starts at $699, though the base model features just 64GB of storage. Apple observers expect the entry-level iPhone 12 to come in at $699, too, with a larger model available for $799.

Samsung is already taking pre-orders for the Galaxy S20 FE, with the phone going on sale on October 2. Unless Apple has a surprise up its sleeve in the next few days, that’s going to beat the iPhone 12 to market. The latest rumor suggests Apple’s new phone will reportedly debut on Oct. 13, nearly two weeks after the S20 FE has been in stores.

The Galaxy S20 FE and iPhone 12 sound like they take similar design paths, at least if the rumors about the iPhone 12 are accurate. While both Samsung and Apple reserve premium materials for their high-end phones — the other S20 models in Samsung’s case and the iPhone Pro versions for Apple — the less expensive flagships use less flashy materials in exchange for that lower price.

In the case of the Galaxy S20 FE, that means a plastic body in lieu of the glass and metal that the rest of the S20 lineup employs. Similarly, if the iPhone 12 follows the path of the iPhone 11, Apple is going to use aluminum and glass rather than the stainless steel featured in the Pro versions. In one significant change, the iPhone 12 should feature an OLED screen instead of the LCD panel Apple used in the iPhone 11, as the company upgrades the displays on its standard flagship.

Speaking of displays, you’ll likely get a range of choices with the iPhone 12, with Apple rumored to be releasing a 5.4-inch phone, apparently called the iPhone 12 mini, in addition to a 6.1-inch iPhone 12 model. (The Pro versions of the iPhone 12 will apparently come in 6.1- and 6.7-inch options.) There’s just one Galaxy S20 FE size, as the phone features a 6.5-inch display.

The Galaxy S20 FE’s display should boast two advantages over whatever Apple comes up with for the iPhone 12. For starters, there’s no prominent notch on the Galaxy S20 FE — just a punch-hole cut-out for the phone’s front camera. (And it just happens to be the smallest cut-out Samsung’s ever offered, measuring 3.3mm.) The Galaxy S20 FE’s display also offers a 120Hz refresh rate, matching the smooth-scrolling capabilities of the other S20 models. If the iPhone 12 adds a 120Hz refresh rate, it will likely be restricted to the iPhone 12 Pro models, and even that’s up in the air at this point.

Get ready for a photo face-off, as both the Galaxy S20 FE and iPhone 12 promise multiple lenses and savvy software for producing high-quality shots.

We already know what we’re getting with the Galaxy S20 FE, which adopts the triple lens setup of the Galaxy S20, though with some less powerful optics. The S20 FE features a 12MP wide angle lens as its main camera, with a second 12MP shooter for ultra wide angle shots. There’s also an 8MP telephoto lens with a 3x optical zoom. Push past that, and you can enjoy a 30x digital zoom with the Galaxy S20 FE. The same software-powered features on the Galaxy S20 — Night Mode, Super Steady recording and Single Take — are also around for the S20 FE.

iPhone 12 rumors point to the entry-level models sticking with the two lenses found on the iPhone 11 — a main camera and an ultra wide angle lens. (The Pro models are likely to still feature a telephoto lens plus a LiDAR sensor to help with portrait shots and augmented reality apps.) The new iPhone will also benefit from Apple’s software expertise, with features like Smart HDR and Deep Fusion emphasizing the details in the photos you capture.

This battle might be over before it’s even started. The Galaxy S20 FE features the same Snapdragon 865 system-on-chip as the rest of the Galaxy S20 lineup. There’s only 6GB of RAM in the FE, compared to 12GB in the Galaxy S20, so we’d anticipate the new Samsung phone to be less peppy when it comes to multitasking. Still, the Snapdragon 865 is one of the best chipsets for Android phones — not as fast as the newer Snapdragon 865 Plus, but still powerful enough to close the gap considerably with Apple’s top-performing mobile processors.

Notice that we said “close” the gap, though. The A13 Bionic still outperforms the Snapdragon 865 on many benchmarks, and this fall’s iPhones will get an entirely new processor. The A14 Bionic, already set to power the iPad Air 4, is a 5-nanometer chip that figures to not only be faster than the 7-nanometer A13, but also more power efficient. We figure it will continue to enjoy a sizable edge over whatever the Galaxy S20 FE can deliver.

Both the Galaxy S20 FE and iPhone 12 offer 5G connectivity. (That’s confirmed for the Galaxy phone and heavily expected for Apple’s upcoming release.) The S20 FE works on all types of 5G, with Verizon selling a special Galaxy S20 FE UW model that’s compatible with its high-speed mmWave-based 5G network. It’s unclear whether the iPhone 12 will work on that version of 5G, as some rumors have suggested mmWave compatibility will be restricted to the iPhone 12 Pro models.

We’d expect big things from the Galaxy S20 FE when it comes to battery life. Samsung equipped its new phone with a 4,500 mAh battery, which is bigger than the 4,000 mAh battery in the standard Galaxy S20. The S20 only lasted 9 hours and 31 minutes on our battery test, which is below average for a smartphone, and that was when we tested with the 60Hz refresh rate enabled; turning on the 120Hz refresh rate cut the time closer to 8 hours. There’s a lot of room for improvement, is what we’re driving at.

Apple tends not to favor big batteries. The iPhone 12 will reportedly run on a 2,227 mAh power pack, while the iPhone 12 Max could bump things up to 2,775 mAh. Battery size has had little bearing on performance, though, as the iPhone 11 turned in a very impressive time of 11 hours, 16 minutes on our battery test, and it only uses a 3,046 mAh battery (or so teardowns of that phone would have us believe).

The Galaxy S20 FE can charge at 25W, though you’ll only get a 15W charger in the box. That’s more than iPhone 12 users can expect, though, as Apple may not even include a charger with its new phones, according to some rumors. The company is already forgoing shipping adapters with the new Apple Watch Series 6 and Apple Watch SE, so the precedent may already have been set for the iPhone 12.

Samsung has recently committed to three Android updates for its flagship phones like the Galaxy S20 FE, though in this case one of those updates will be Android 11. The new phone ships with Android 10, even though a newer version of Android launched earlier this month. There’s no time frame on when Samsung will roll out the Android 11 update with its new One UI interface.

When the iPhone 12 ships, the newly-released iOS 14 will already be installed, and you’ll be able to upgrade to new versions just as soon as they’re available. You can usually count on new iPhones to be able to run the next four years’ worth of iOS updates, though some devices as old as five years are capable of running iOS 14.

Any true Galaxy S20 FE vs. iPhone 12 face-off won’t be settled until Apple’s new phone materializes. But from what we’ve seen from Samsung’s latest device, the iPhone 12 faces some stiff competition. The Galaxy S20 SE offers many of the noteworthy features that earned the Galaxy S20 high marks, but with a lower price tag. The few concessions you have to make — build materials, screen resolution and on-board memory — aren’t showstoppers at all.

Even with the iPhone 12 Pro models getting the more marquee features, the iPhone 12 should deliver a lot to Apple’s lineup, starting with OLED screens and 5G connectivity. Throw in the new A14 processor and Apple’s reputation for making some of the best camera phones, and we could have quite a smartphone competition on our hands.