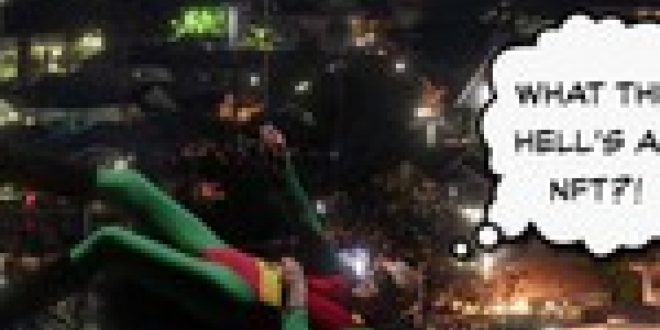 ‘Saturday Night Live’ Spoofs Eminem’s ‘Without Me’ to Explain NFTs

After stumping the professor, Chris Redd — dressed as Dr. Dre’s take on the Matrix’s Morpheus — chimes in to offer pills and explain further. “Non-fungibles, GIFs of Ron Funches eating Lunchables/ Or pics of Colin Jost’s face, very punchable/ Digital images of Digimon doin’ scrimmages/ Or a pic of a nun with a Nintendo Switch!” he rhymes. “A dictionary with a pic of fat Jerry/ I made it last night and now I got $3,000/ And now I can buy me a GIF of Peter Griffin crossing up all-star ballers who are tall.”

Confused by the “complete nonsense,” McKinnon’s turns to the janitor — played by musical guest Jack Harlow — for a more “eloquent” explanation of what, exactly, NFTs are. “Here’s the thing about NFTs/ It’s a non-fungible token you see/ Non-fungible means that it’s unique/ There can only be one like you and me,” the rapper begins. “NFTs are insane, built on a block chain/ A digital ledger of transactions/ It records information on what’s happening/ When it’s minted you can sell it as art/ And this concludes my rapping part.”

Satisfied with his explanation, Yellen then invites the three men to join her for a UFC 260 event. As the four strut out of the classroom to the tune of “Without Me,” they turn into an NFT reminiscent of the Beatles crossing Abbey Road.

This is the long-running NBC show’s second take on a popular Eminem song in recent months. Ahead of Christmas, Davidson helmed a sketch that took on the rapper’s hit “Stan.” In it, Davidson played “Stu,” who was obsessed with Santa Claus. Eminem also made a surprise appearance in the bit.

Watch the full “NFTs” sketch below: