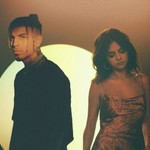 Selena Gomez grabs her second top 10 on Billboard’s Latin Airplay chart as “Baila Conmigo,” with Rauw Alejandro, surges 13-6 on the March 13 survey. The track ascends with a 16% gain in audience impressions, to 7 million, earned in the week ending March 7, according to MRC Data.

“Baila Conmigo” is Selena’s first fully Spanish-language track to arrive in the list’s top 10. DJ Snake’s bilingual “Taki Taki,” where she is featured alongside Ozuna and Cardi B, earned her a first No. 1 as it landed atop Latin Airplay in 2018.

Rauw Alejandro, meanwhile, collects his fifth top 10, three of which have led the tally for one week: “TBT,” with Sebastian Yatra and Manuel Turizo (July 2020), “Tattoo,” with Camilo (Sept. 2020), and “La Nota,” with Manuel Turizo and Myke Towers (Jan. 13-dated chart).