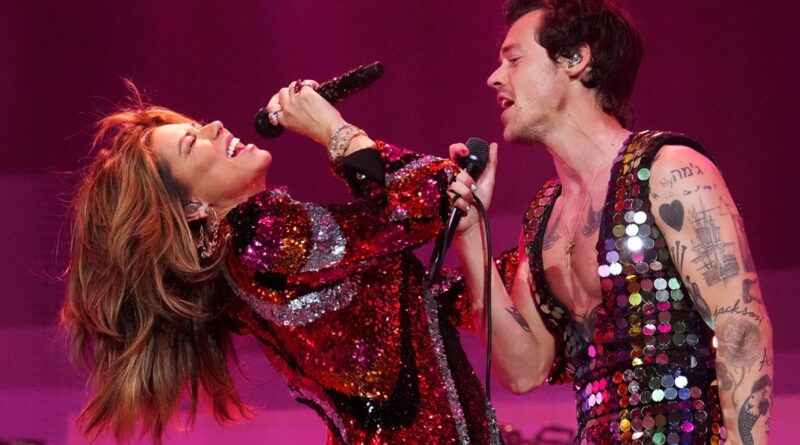 The pair previously teamed up for Styles’ performance at Coachella in April.

Shania Twain and Harry Styles perform onstage at the Coachella Stage during the 2022 Coachella Valley Music And Arts Festival on April 15, 2022 in Indio, California.

Shania Twain is clearly a big Harry Styles fan — so much so that she hopes to work with the former One Direction member on some music in the future, when the time is right.

The country singer — who previously joined Styles onstage at Coachella in April to perform “Man! I Feel Like a Woman” and “You’re Still the One” — sat down on the Monday episode of TalkShopLive with TV personality Nancy O’Dell to talk about her forthcoming album, Queen of Me, the amount of music she’s sitting on and a possible Styles collab.

“I went up onstage with Harry Styles [at Coachella]. He invited me on his stage, which was so wonderful and [he’s a] lovely, lovely person. I want to say lovely kid, but I mean he’s not a kid anymore, is he? He’s a man,” she said of the “Watermelon Sugar” singer. “[A collaboration] would be my dream, yes. He’s busy making movies right now. I would love that. Put it out there! Make it happen, absolutely. And magic will happen, I’m sure.”

As for Twain’s latest album Queen of Me, she told TalkShopLive that the pandemic allowed her a significant amount of time to step back and write. The lockdown period was a prolific one for the singer, who says she developed multiple albums’ worth of material during the Queen of Me writing sessions.

“The COVID period gave me more time than I expected,” Twain said. “So I basically wrote four albums worth of music. This is just the beginning. I was so productive, I wrote a lot of music. So it was very difficult to narrow it down to what would then be this album, Queen of Me, but, of course, once I determined the real focus of the sentiment of the album, what I want to express personally out there right now, which is the Queen of Me message, be the queen of yourself, the boss of you and take responsibility for the good and the bad and everything that comes in between, so the songs naturally fell into place after that, once I had a good beginning, which was the title.”

When asked to clarify if it’s “truly” four separate albums from Queen of Me, Twain said: “Oh yes. Definitely.” Those albums will sadly not see the light of day anytime soon. “I think we’re going to have to wait for awhile. It’s going to be well over a year because I still have a tour coming up, I’ve got so many projects,” Twain added. “I’d say well over a year. Could be a couple years.”

Queen of Me will be released via Republic Nashville on Feb. 3, 2023. Watch Twain talk about the record and the Harry Styles collab in the video above.