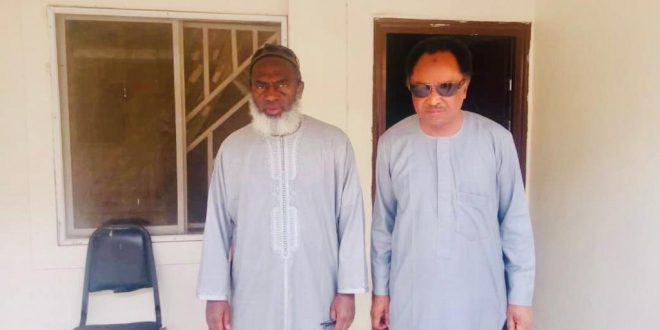 A former senator, Shehu Sani, has urged popular Islamic cleric, Ahmed Gumi, to intervene in securing the release of the 39 students of Federal Forestry College and members of the Redeemed Christian Church of God (RCCG) held by kidnappers in Kaduna State.

The former lawmaker made the appeal when he visited the cleric in his residence in Kaduna, Monday afternoon.

Mr Gumi has been in the news in recent times after following an appeal he made to the government to grant amnesty to bandits.

The cleric has also met bandits in Kaduna, Katsina, Niger and Zamfara to negotiate their peaceful surrender after years of killing hundreds and displacing many from numerous communities.

He also reportedly met the bandits responsible for the abduction of 27 students and 15 others from the Government Science College, Kagara in Niger State to negotiate the release of the hostages. He has been criticised for his efforts by some Nigerians.

But he had argued that the easiest way to end the menace is to negotiate with the killers.

Speaking during the visit, Mr Sani expressed his desire to see the end of banditry in the country.

He urged the cleric not to relent on his efforts “as many people were proud of what he was doing”.

“I’m one of the Nigerians passionate about bringing an end to insecurity in the country and I will not relent. I beg you not to retreat from whatever effort you are putting in place,” the former lawmaker said.

“We cannot also defeat people until we understand them and win some of them over. So do not be discouraged by words and lack of recognition.

“A mother whose child is in the hand of kidnappers will simply want their release at all cost. I call on you to use the privilege, the opportunity and the power which God has personally endowed you with to help free the 39 Afaka forestry college students and the RCCG members in captivity.”

He said he had met the parents of the abducted students prior to their meeting with the Kaduna State Government.

He said he was not a negotiator for bandits, as he always ensured that government officials were present in his discussions with bandits in the forests, before the federal government’s shoot at sight order on armed bandits.

“As for the college students, we are making arrangements for them through a contact to see how these problems can be solved.

“The case has been referred to ‘someone’ and he is doing his best,” the cleric said.