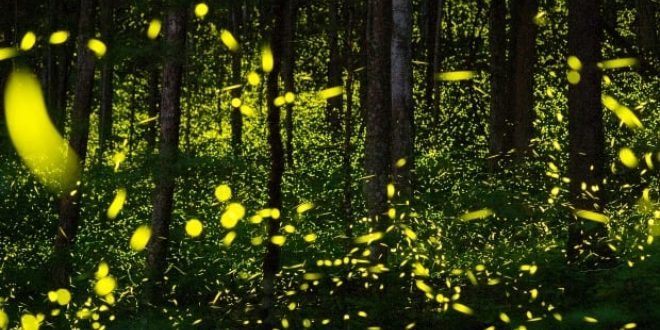 Some fireflies can flash in unison, and scientists are trying to figure out how

Orit Peleg has long been fascinated by fireflies that appear to flash in synchronicity, but she only just recently got to witness the phenomenon up close.

Scientist Orit Peleg has long been fascinated by fireflies that appear to flash their lanterns in synchronicity — but she only just recently got to witness the phenomenon up close.

Peleg and her colleague Raphael Sarfati travelled to the Great Smoky Mountains, which straddle the borders of North Carolina and Tennessee, to witness and film a massive swarm of Photinus carolinus, one of only a handful of firefly species known to synchronize flashes from their lanterns, the light-producing organs.

It’s a mysterious phenomenon that people have long observed with their own two eyes. But it’s never been documented in detail or confirmed scientifically until now.

“Seeing it for the first time was just mind-blowing. It was beautiful, emotional and everything together,” Peleg, a computer scientist from the University of Colorado Boulder, told As It Happens guest host Duncan McCue.

“It’s very beautiful and it’s hard to describe in words.”

The findings were published in the journal Science Advances.

Peleg first heard of synchronous fireflies when she was doing her undergraduate degree in physics.

“I took some classes where we were taught how to understand mechanistically how systems in nature synchronize, which is a very common behaviour for living systems, but also non-living systems, like atoms,” she said. 6:42Scientist describes fireflies blinking together all at once

“In these textbooks, they usually use fireflies as … a relatable example for students, because fireflies are, of course, very beautiful and it’s maybe a little bit easier to imagine in your head a firefly flashing than an atom.”

Later, when she had her own lab, Peleg found herself thinking about those fireflies again. But she was surprised to find there was very little scientific data about how they time their flashes.

In fact, some early 20th-century scientists denied that the phenomenon of synchronized flashing even existed, brushing it off as accidental, or a mere trick of the eye.

Observing and documenting the fireflies

So Peleg and Sarfati went straight to the source: the Great Smoky Mountains National Park, where crowds gather annually to watch the fireflies flash in unison.

The light show is part of a firefly mating ritual — for about two weeks, the males flash and dance to impress the females.

The scientists placed two cameras amid the swarm nearly four metres apart, with an overlapping field of vision, “kind of like our eyes working so we can triangulate distance,” Peleg said.

Then they used a computer program to reconstruct where these flashes occurred in time and space in three dimensions.

How many fireflies does it take to synchronize a swarm in its natural habitat? And how fast does the burst propagate throughout the swarm?https://t.co/wccF813IUx

A cascading wave of flashes

They found that the creatures don’t blink at the exact same time, but rather in a rapid cascading wave, suggesting that they are taking their cues from each other to generate the appearance of synchronized blinking.

But they still don’t entirely understand how the fireflies do it.

“An individual firefly is able to only interact with a small part of the swarm. And so what we’re trying to understand is how a firefly sees or perceives the flashes that occur next to it and integrate that signal and then decide when to flash.”

Understanding the mechanisms of these fireflies, she says, could have real-world implications for understanding and improving other synchronized systems, like telecommunications networks, or even the human circulatory system.

“In the sense that sometimes there is universality in nature, we are hoping that maybe the results which we learn about fireflies could also be projected and applied to all of these different systems.”

MORE FROM THIS EPISODE