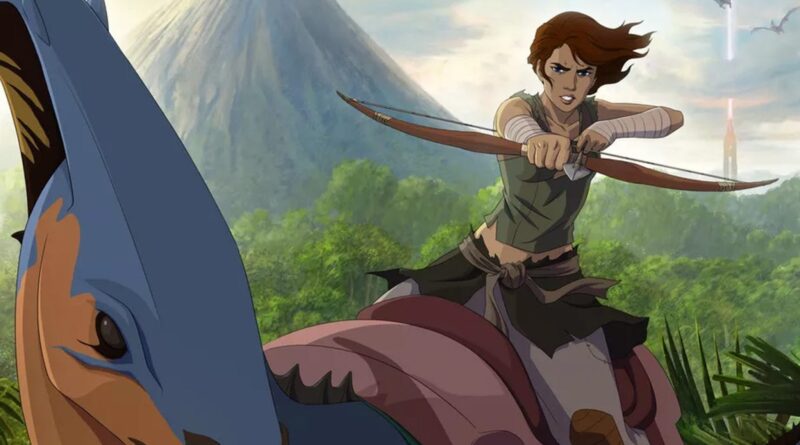 There’s so many live service and online games out there that hearing about one you’ve never really put much thought into can often be a pleasant surprise. Maybe what you hear about catches your attention for a few days, maybe it gets you to dip into said game to see what it’s all about. That’s more or less what I’m at now after watching the trailer for the upcoming animated series for Ark: Survival Evolved.

In case you, like me, don’t remember hearing about this show before hand, the series was announced all the way back in 2020 during the Game Awards. The basic setup appears to be that modern day paleontologist Helena Walker (voiced by Madeline Madden) winds up on the planet Ark, which is filled with prehistoric creatures and warring human factions. With a group of fellow humans who’ve all been blasted in from previous points in time, Helena learns to become a formidable warrior on level with her peers. I’m not sure how much of the trailer is true to the games, but honestly, this show looks good, and the cast is surprisingly stacked: in addition you’ve got Westworld’s Zahn McClarnon, Gerard Butler, Elliott Page, and reliable celebrity voice actors Alan Tudyk, Michelle Yeoh (who’s just collecting sci-fi franchises like candy, it seems), and Karl Urban. I’d be lying if I said I this trailer didn’t interest me enough to maybe check out the original game or its eventual sequel.

The original Ark from 2017 is an MMORPG from Studio Wildcard set in a world with the aforementioned dinos and additional mythical monsters (some from history, others wholly original from the developers). Players establish base, go on missions, and everything else that makes up a survival MMO; the original game has been incredibly popular over the years, so much so that Sony and Microsoft paid millions at different points to keep the game on their respective subscription platforms. Studio Wildcard released the game’s final expansion in 2021 and is already at work on Ark II, which will star Diesel and Moana’s Auli’i Cravalho and come to Xbox Game Pass via Early Access in 2023.

Look for Ark: The Animated Series to arrive on a currently unannounced streaming platform in 2023.