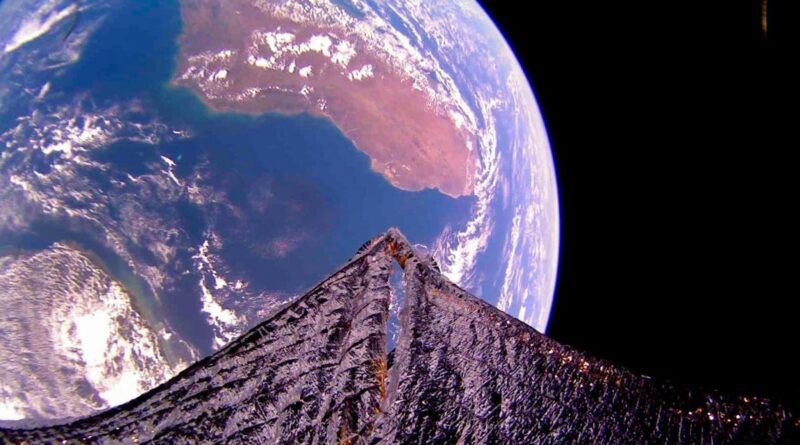 For the past three years, a tiny loaf-of-bread-sized spacecraft with gigantic wings has been sailing on sunbeams in low Earth orbit. LightSail 2 has far exceeded its life expectancy and proven that solar sails can indeed be used to fly spacecraft. But its journey around our planet is sadly coming to an end, as Earth’s atmosphere drags the spacecraft downward where it will eventually burn up in atmospheric flames.

The Planetary Society’s LightSail 2 launched in June 2019 and unfurled its 344-square-foot (32-square-meter) solar sail a month later. Just two weeks after spreading its wings, LightSail 2 gained 2 miles (3.2 kilometers) of altitude, making this experiment a success. But for the past few months, LightSail 2 has been losing altitude at an increasing rate. It is now sailing at an average altitude of about 390 miles (627 km), down from about 446 miles (718 km) at the beginning of the mission, according to the Planetary Society.

The scientists behind the mission are anticipating that LightSail 2 will reenter Earth’s atmosphere within the next several months, but they don’t have an exact date. During reentry, the spacecraft will be moving so quickly that it will create an energetic pressure wave ahead of it, causing the air around it to heat up and burn LightSail into a fiery shroud.

Throughout its mission, LightSail 2 has enjoyed some highs and lows (literally). The orbiter sometimes lost a few meters of altitude per day and sometimes gained a few meters. But after three years of sailing around the Earth, the experimental device began to experience a steep drop in altitude as the result of several factors.

Ironically, the Sun also worked against LightSail 2. When the Sun is more active, it heats Earth’s upper atmosphere, causing it to expand into higher altitudes. At the start of the mission, the Sun was going through some downtime as part of its 11-year cycle, but our host star recently revved up its activity for its solar maximum period. This has caused the atmosphere to be denser at higher altitudes, even reaching the spacecraft, causing LightSail 2 to drag downwards.

The third factor leading to LightSail’s demise is more human than cosmic. The mission suffered communication glitches due to faulty equipment at the ground station. During times of communication drop-off, the team was unable to send data to the spacecraft, causing its sailing to suffer, albeit slightly.

Although LightSail 2 will soon meet its fiery death, the spacecraft’s legacy will still live on. The orbiter has inspired several other missions, including NASA’s NEA Scout mission to a near-Earth asteroid (scheduled for launch in August), NASA’s Advanced Composite Solar Sail System to test out sail boom material in Earth orbit (scheduled for launch sometime mid-2022), and NASA’s Solar Cruiser (scheduled for a 2025 launch). The era of the solar sail, it would seem, is quickly approaching.