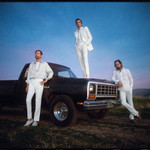 The Killers Snag Seventh U.K. No. 1 With ‘Pressure Machine’

With that feat, every studio album from The Killers has topped the main chart, dating back to their 2005 debut Hot Fuss.

Including his solo work, The Killers’ frontman Brandon Flowers has an unbroken run of nine chart-topping albums, a chart record in the U.K.

Other acts on an unbeaten run include Coldplay (with eight), Oasis (seven), and Arctic Monkeys (six), the OCC reports.

The week’s most-streamed album belongs to Olivia Rodrigo, whose Sour (Geffen) lifts 4- 2, while electronic production duo Jungle swing in for a career-best No. 3 with Loving In Stereo (Caiola), their third album.

Following the announcement last week Ed Sheeran’s forthcoming studio LP=(equals), his 2017 and most recent album Divide (Asylum) powers back into the Top 10, up 14-10.

Over on the Official U.K. Singles Chart, Sheeran continues his reign into an eighth week with “Bad Habits.”

The=single is boosted by a new remix featuring rappers Tion Wayne and Central Cee, and remixed by London-based producer Fumez The Engineer.

On the most recent frame, “Bad Habits” racks up 11 million streams and leads all singles on downloads.