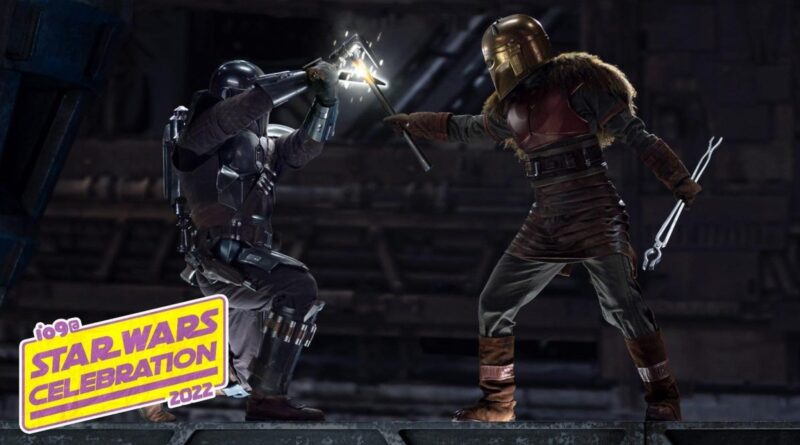 Ever since the Mandalorian acquired the Darksaber from Moff Gideon, another showdown was inevitable. Bo-Katan Kryze believed she was destined to take possession of the saber but, alas, she didn’t. And in the third season of The Mandalorian, it’s going to be an issue. “You didn’t think you’d get rid of me that easy, did you?” actress Katee Sackhoff said as she took the stage at Star Wars Celebration in Anaheim. “I may have some unfinished business.”

Sackhoff was there to pump up the fact that she’s returning for The Mandalorian season three, and co-creators Jon Favreau and Dave Filoni played a quick trailer of the season in which Bo-Katan was featured prominently. The trailer will not be released online—because the show doesn’t debut until next year—but io9 was there, and here what we saw.

We see Mando (Pedro Pascal) walking toward a bunch of jagged rocks. The Armorer (Emily Swallow), in voiceover, speaks. “You have removed your helmet. What’s worse, you did so of your own free will. You are no longer Mandalorian.” As this happens, we see her, as well as Mando and Grogu, walking into a cave. There’s a light on Grogu’s pram. “Redemption is no longer possible since the destruction of our homeward,” she continues.

Next we see Bo-Katan in a large, ornate stone room. She’s sitting on a well-carved, long, almost stone couch. “Your cult gave up on Mandalore long before the purge,” she says to Mando, with venom in her delivery. “Where were you then?” A montage of shots follows, including dogfights with Mando’s new ship, Grogu sitting up front with him, and an overhead glimpse of several Mandalorians on a mission.

Then a bright city. Almost Gondor from Lord of the Rings bright, and a bunch of Kowakian monkey-lizards are hanging together on a tree. Mando stands under the tree, next to a fountain, and Greef Karga (Carl Weathers) comes out in brand new red robes. “I heard you were back, but I didn’t believe it,” he says, greeting Mando. It seems like he’s in some kind of position of power. Then, in a quick montage we see a new character played by Saturday Night Live alum Tim Meadows, Doctor Pershing (Omid Abtahi), and Carson Teva (Paul Sun-Hyung Lee), the latter of whom looks to have been promoted from X-Wing pilot. Also, a few new droids here and there too.

“I’m going to Mandalore so that I may be forgiven for my transgressions,”Mando says. Then a montage of more ships, more dogfighting, Doctor Pershing walking on some kind of base, as well as lots of different shots of Bo-Katan looking at things—in person, through a starship, etc. And then in a cave, Bo-Katan shoots a wall in front of Grogu. It crumbles down, she turns to him and says, “Did you think your dad was the only Mandalorian?”

You can gleam a few things from the footage, most of them rather telegraphed from the last episodes of the show as well as the more recent Mando-themed episodes of The Book of Boba Fett. First, Bo-Katan has a huge role here and might even be the main antagonist. Second, lots of Doctor Pershing, so maybe we learn more about Grogu’s abilities. And third, the story teased on The Book of Boba Fett, of how Mando must go to Mandalore to be redeemed, feels like the primary storyline. Or so we think from this 60 or so second tease.

The Mandalorian season three has finished filming and will be on Disney+ in 2023.