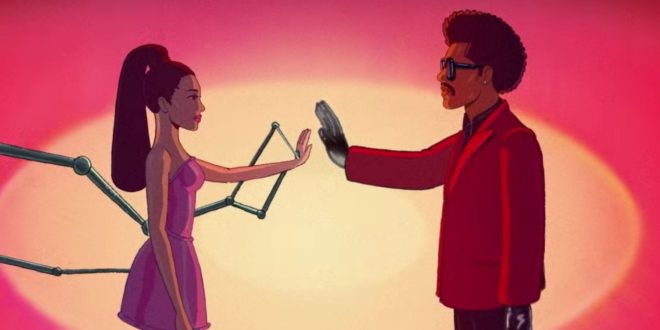 As it pops up near the end of The Weeknd’s moody fourth LP After Hours, synthpop ballad “Save Your Tears” feels perhaps the most appropriate to the album’s title of any of its tunes. It’s more hangover than party, though its gorgeous, funky sonics (and eventual robotic vocalizations) create the kind of pop turn producer Max Martin has made a career out of.

It makes sense, then, for Ariana Grande to hop on the remix, out today (April 23), and for her contributions to leave the song even more dazzling. What’s more surprising is the song’s accompanying new animated video, which finds an animated Weeknd creating his own Grande out of spare parts in an underground lair.

The clip, directed by Jack Brown and produced by London animation studio Blinkink, fuses The Weeknd’s chaotic, stylish After Hours persona with Grande’s fembot iconography she leaned heavily into for Positions, her sixth album that dropped in October 2020. It’s a nice match.

This isn’t the first time Abel Tesfaye has been a cartoon, either. Last year, he appeared on TBS’s American Dad to poke fun at his sex-fueled persona and “admit” to actually being a virgin; his 2020 “Snowchild” video recruited Japan’s D’ART Shtajio animation studio to turn him into an anime protagonist as well.

Check out the spiffy new video above, then revisit Ari and Abel’s previous collabs: “Love Me Harder” and “Off the Table.”