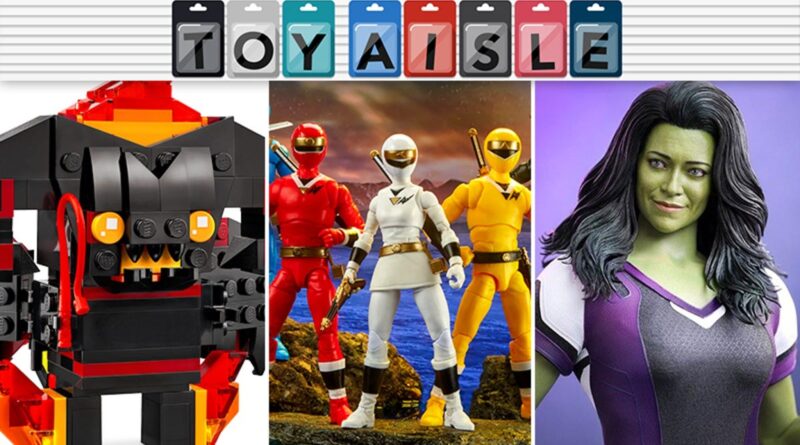 Welcome back to Toy Aisle, io9’s regular round up of all things wonderful and plastic. This week, Lego returns to Lord of the Rings with some unlikely new sets, Hasbro’s Power Rangers Lightning Collection goes ninja-mad, and our first look at Transformers: Rise of the Beasts toys rolls in. Check it out!

With the Rings of Power recently wrapping up its first season on Amazon, there’s a renewed interest in The Lord of the Rings, so Lego is revisiting Peter Jackson’s original trilogy with a new collection of BrickHeadz collectible figures. The one to get is obviously the $20, 348-piece Gandalf the Grey & Balrog set featuring some fun flame effects and an adorable little fire whip. Also coming in at $20 is the 261-piece Aragorn & Arwen set featuring each character in their Return of the King wedding outfits. Coming in a bit cheaper at $15 is the 184-piece Frodo & Gollum set due to the smaller size of each figure, which, like the other two sets, will officially be available from Lego starting January 1.

The short lived Alien Rangers of Aquitar are from an oft-forgotten era of Power Rangers, having only appeared in a short 10-episode miniseries between the Mighty Morphin’ and Zeo eras. Which is probably why instead of eking them out in individual releases across waves of the Lightning Collection, Hasbro has decided to drop them all in a special box set—a rarity for the company’s approach to completing Ranger teams in plastic form. There’s no alternate unmasked heads here, so what you see is what you get: the five Rangers, their blasters and power swords, and some alternate hands and weapon FX parts. That also means, Sentai fans, you can blur your vision and pretend that this is just a Ninja Sentai Kakuranger box set—today is Friday in California, after all. It costs $121, and is set to release by summer 2023. [Hasbro Pulse]

We’re already big fans of Lego’s Speed Champions line featuring surprisingly faithful recreations of real-life sports cars in relatively affordable sets, but now even more so, with the company bringing the iconic vehicles from the Fast & Furious movies to the line. Following the Speed Champions version of Dom’s 1970 Dodge Charger, we’re now getting a 319-piece version of Brian O’Conner’s Nissan Skyline GT-R (R34) from the second film, including a minifigure version of the character. The set will be available starting January 1 for $25.

Hot Toys is known for its incredibly lifelike head sculpts of the characters it turns into sixth-scale figures, but it’s a process made considerably easier when the character already exists as a detailed 3D model, as is the case with She-Hulk: Attorney at Law’s Jennifer Walter in Hulk mode. This 14-inch figure sticks to She-Hulk’s Spandex bodysuit instead of the character’s more formal courtroom outfits, but does come with a 10 different swappable hands with various gestures. The figure is packed with 30 points of articulation, including seamless elbow and knee joints that are completely hidden, plus a pair of rollable eyes for expression adjustments. There’s no pricing yet, but availability isn’t expected until the first quarter of 2024.

There has to be a law on the books somewhere that says you can’t have a new Transformers movie without a bunch of new Transformers toys. Hot on the heels of the first Transformers: Rise of the Beasts trailer, Hasbro has revealed the first two new toys based on the film: another $25 Bumblebee variant (why does Hollywood think this is a fan-favorite character?) that goes from robot to Camaro mode in 23 steps, and a $35 figure based on a new character, Battletrap, that goes from robot mode to a wrecking ball-wielding tow truck in 30 steps. Both are available for pre-order now, but won’t ship out until April of next year.

Your home is probably filled with shelves full of action figures, but when the holidays roll around, and all your festive decor goes up, there’s one that’s probably missing: Santa Claus, Father Christmas, Père Noël, or however you refer to the mythical character. Four Horsemen is remedying that this year with a new six-inch, highly articulated, and well-dressed Kris Kringle figure that includes a sleigh full of accessories, like a walking staff with a hanging lantern, a pine tree, two heads with different beard lengths, and a sack full of toys—but no actual sleigh. The figure is available now for $60, but trying to get one shipped to you before the 25th might be a challenge.

Although a comic book staple for decades, we haven’t seen much of Dick Tracy since the character’s star-studded Hollywood outing back in 1990 with Warren Beatty and Madonna. He’s an iconic hero, however, and definitely worth of Mezco Toyz’ One: 12 Collective figure treatment, paired with one of the detective’s many distinctive foes: Flattop. This two-pack isn’t cheap at $195 with shipping expected in late 2023, but each six-inch figure comes with a great sculpt, a full fabric outfit, and a mountain of accessories, including three swappable head sculpts for Tracy and four for Flattop.

Grab any kid off the street and ask them what’s at the top of their holiday wish list, and nine out of 10 of them will say “a miniature concrete bunker.” Hasbro once again remains several steps of all the other toy makers vying for kids’ attention and parents’ dollars with this Endor Bunker playset, loosely based on a similar playset released by Kenner many moons of Endor ago. As it’s part of Hasbro’s Star Wars The Vintage Collection, the playset even comes in retro-ish Kenner packaging, and includes a single 3.75-inch Endor Rebel Commando Scout Trooper Disguise figure. The set is available for pre-order now for $60, but won’t ship until June of next year.