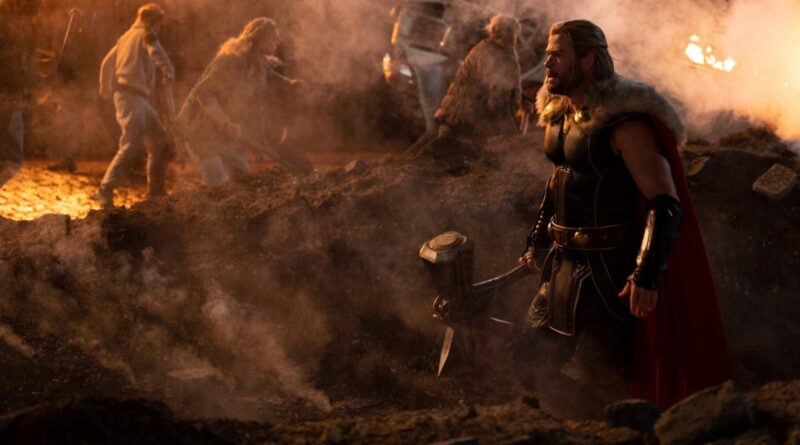 Thor: Love and Thunder is the rare Marvel movie where its end credit scenes aren’t its biggest teases. We’d argue the film’s natural ending is probably a bit more revealing when it comes to the future of Thor, but there are still two scenes in the credits and each has a strong significance. Let’s break them down.

(Obviously discussing both scenes will mean spoiling major plot lines in the film, so proceed with caution.)

Scene one happens in the middle of the credits. We’re back in Omnipotence City and see that, despite what Thor and his friends thought, Zeus is not actually dead. He’s injured, and really pissed off, but not dead. He talks about how being a God is different now. It used to be people prayed to them for help, but now all they do is pray for their precious superheroes. It’s obvious Zeus is jealous of how popular superheroes like Thor have become and says it’s time for the gods to take back their rightful place in the galaxy—something he hopes to achieve by defeating Thor Odinson himself. Zeus assigns this task to his son, Hercules, seen for the very first time in the Marvel Cinematic Universe and played by the Emmy-winning Ted Lasso actor, Brett Goldstein.

The implication here is rather simple. Thor tried to kill Zeus, did not succeed, and now Zeus is going to get his revenge. The next time we see Thor, he’ll have to deal with the consequences of those actions—aka the wrath of the gods, via a battle with Hercules.

The more interesting question though is, when will this happen? Could this be the plot of the next Thor movie? Will other gods join in and have a showdown with more Avengers for Avengers 5? Aren’t, ultimately, the gods and heroes on the same side? Could they team up? We don’t know. But Thor and Hercules have been rivals in Marvel Comics for decades so there’s plenty of precedent, as well as plenty of storylines to draw on.

Another note here is that this is the third recent Marvel movie to pull a bit of stunt casting in its end credits sequences. Harry Styles as Eros in Eternals, Charlize Theron as Clea in Doctor Strange 2, and now Brett Goldstein as Hercules in Love and Thunder. Do you think this sort of reveal is getting tired? Does the MCU really need even more heroes and villains? Time will tell.

Credits scene two has to do with Jane Foster. As you see in the movie, Jane is a key part of helping Thor defeat Gorr in battle—but as a result of her using the power of Thor one last time, cancer gets the better of her and she dies in Thor’s arms. The end credits scene shows her arriving somewhere beautiful and being greeted by none other than Heimdall himself, played by Idris Elba. (Heimdall was killed by Thanos at the start of Avengers: Infinity War if you recall). Heimdall tells Jane she’s in the afterlife of the gods, Valhalla, and welcomes her there. That’s it.

While short and sweet, the scene serves a few different functions, none of which are likely to have much bearing on the future of the MCU (could Jane and Heimdall come back from the dead? Hypothetically, but we doubt it) but are important nonetheless. On one hand, the scene makes it very clear to the audience what happened to Jane but it also gives her death a more real-world power. If you’ve watched Love and Thunder, it’s pretty well established throughout (Thor seeing Sif is one example, Odin dying in the stage production is another, plus there are more) that gods who die in battle are rewarded by going to Valhalla. Jane isn’t a god, she’s a human, but because she died in battle, and turned into the same gold specks we see in other instances, there’s a pretty strong indication of where she went. However, if you weren’t clear on that, this scene confirms it.

There’s also the subtext about Jane’s other battle, the one with cancer. She’s not only battling Gorr and his shadows in the film, she’s battling that deadly disease. So her trip to Valhalla could be Love and Thunder’s way to tell its audience that a battle with cancer is just as worthy and inspiring as one with a God Butcher. Which is a nice sentiment because, obviously, it’s a disease that has impacted so many of us.

And so there you have it, the two end-credits scenes in Thor: Love and Thunder. Monday we’ll dive into more spoilers, like what’s next for Gorr’s daughter, played by Chris Hemsworth’s actual daughter, India.