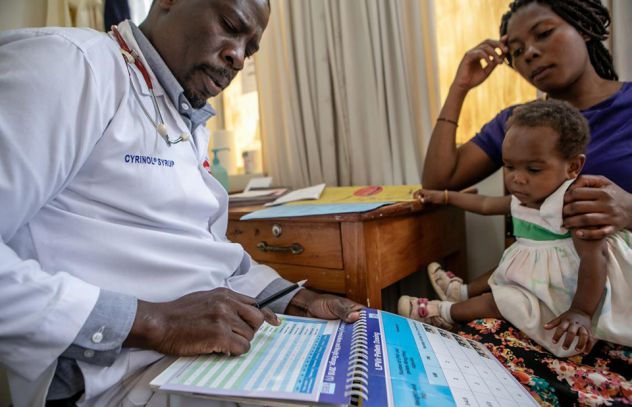 How innovations in rapid testing and child-friendly medicines are saving lives in Uganda.

By Karin Schermbrucker and Adrian Brune — Originally published by UNICEF

Last year, nearly 450 infants acquired HIV every day – most of them during childbirth. These children are at extremely high risk of dying in the first two years of life. But so many of them are never diagnosed or treated.

Inadequate HIV testing and treatment for children is a widespread challenge. Although the 2019 global treatment rate for HIV-positive mothers stands at 82 per cent, the diagnosis and treatment of children with HIV is just 54 per cent in most regions.

This gap in coverage is often because diagnostic processes tend to be more complicated and cumbersome for children. Infants require a special type of testing for HIV (virological), which is not readily available in most low- and middle-income countries.

And although there are age-appropriate antiretroviral medicines for children, they can be hard to find in many areas largely due to a lack of investment in testing them.

This delayed diagnosis and treatment doesn’t have to happen. UNICEF and Uganda’s Ministry of Health recently enacted HIV treatment reforms for children to great success. With the help of partners and innovative diagnostic tools, 553 facilities across the country were able to provide antiretroviral therapy for children – up from 501 in 2017.

Dr. Denis Nansera, a paediatrician, examines Kansiime Ruth, 25, and her daughters aged 1 and 4 years, at the Mbarara Regional Referral Hospital in Mbarara District, Western Region, Uganda on 20 August 2019. “A good number of mothers used to fall out of antenatal care. But with (medical advancements), we see a huge reduction in the time taken to diagnose a child, and time taken to get child on medication,” Dr. Nansera says. Photo: UNICEF/UNI211885/Schermbrucker

Enoch Turyatemba, a laboratory technician at Mbarara Regional Referral Hospital, takes a blood sample from a baby for early infant diagnosis testing, which screens for HIV and determines results on the same day. “Before the Point of Care [POC] machines, we collected dry blood samples and had to send them away. The turn-around time was sometimes months,” Enoch says. “With a POC machine, HIV-positive children can start treatment the next day. “We are saving lives,” Enoch adds. Photo: UNICEF/UNI211916/Schermbrucker

Enoch Turyatemba tests a sample of blood with the POC machine. In addition to the rapid testing, the Ministry of Health has approved the use of oral pellets of pediatric HIV medicine, which can be mixed with food and/or breast milk to disguise the bitter taste of the medication. The pellets also do not require refrigeration – a huge advancement. Photo: UNICEF/UNI211884/Schermbrucker

Kenyonyozi Joseline holds her baby inside the POC clinic at the Mbarara Hospital. Adolescent girls are more vulnerable to HIV infection because their reproductive systems are not fully developed. Gender inequality and patriarchal norms in Uganda also make it difficult for girls and young women to negotiate safe sex, predisposing them to early pregnancies and HIV. Photo: UNICEF/UNI211905/Schermbrucker

Kansiime and her daughters arrive at the Mbarara Hospital. The three family members all live with HIV and go to the clinic regularly to collect their medication. “When I go to hospital, I am surrounded by other women who have come for treatment. We are there for the same reason,” Kansiime says. “This has helped me overcome stigma and given me strength.” Photo: UNICEF/UNI211907/Schermbrucker

Kansiime gives her one-year-old daughter her paediatric HIV medicine at home in western Uganda. Her daughter now takes the oral pellets instead of the bitter syrup she used to use, which has helped her viral load. “It is much easier to give her the pellets mixed into food so she doesn’t struggle with the taste,” Kansiime says. “My advice to other mothers: Give your children the medication they need so they can live longer and educate others.” Photo: UNICEF/UNI211882/Schermbrucker

Kansiime’s four-year-old daughter peeks her head outside the door to her house. She was born with HIV and needs to take medication on a daily basis. But she has survived past the critical period for young children and infants, making her survival into adolescence and beyond more likely. “I love singing – my favorite song is a song called Sconto,” she says. Photo: UNICEF/UNI211903/Schermbrucker

Kabiite Ajara, 32, helps her baby take her paediatric HIV medication in their home in Isongo, Uganda. They are both living with HIV. “I give my baby medication once a day,” she says. “Initially medicine used to make her weak and vomit. But currently she is ok with the drug – I crush the tablet and put it into water, which she takes easily.” Photo: UNICEF/UNI211928/Schermbrucker

Kabiite plays with her daughter outside their home. Kabiite is HIV-positive, but regular medication keeps her strength – and spirits – high. “I love playing with my children – taking them to play in the banana plantation, cooking together,” Kabiite says. “[My daughter] loves playing football a lot! And she is good!”