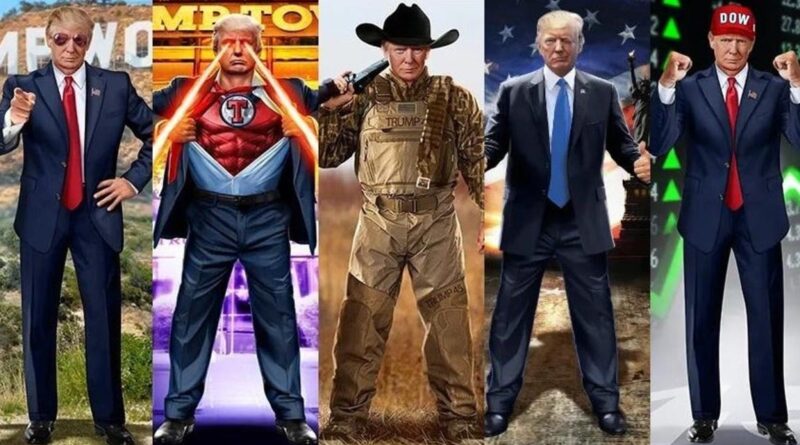 Over the last 24 hours, fans of ex-President Donald Trump have sat huddled in their chairs, waiting with bated breath for a supposed announcement the once tweeter-in-chief promised would blow their socks off. He posted a video to his Truth Social page showing an image of him in a kind of superhero garb, sporting pecs he most certainly does not have, as laser beams shoot from his eyes. What could this mean? What apocalypse was coming?

On Thursday the grand surprise was finally revealed and it was nothing but another horrific NFT project that, in Trump’s words, featured “amazing ART of my Life & Career!” These “digital trading cards” are indeed just another cash grab NFT project, but the low quality images and the company in charge of the project are a more complicated enigma.

Each NFT sells for a total $99, and some are limited as single copies, while other NFTs are available in two, five, seven, or 10 copies. There are a total of 45,000 cards in the initial release, but even more, one big fan of Mr. Trump will be “guaranteed” a ticket to some future gala dinner with him, ostensibly at his Mar a Lago residence in South Florida. The auction even promised to pay for transportation. So yes, spend $4,455 and you could also have a sit down with the former president himself. Although we can guarantee you he will not look nearly as slim as he does in these trading cards.

The images were so lazy that based on reverse image searches they were edited photos scraped off the internet. It’s unclear if they were edited by hand or perhaps crafted using AI image generation, though the one image of Trump in hunter garb bears a very distinct resemblance to waders crafted by Banded, a hunting apparel company.

Trump’s cowboy outfit appears to match a leather duster imported to shops like Scully Sportswear, a California-based costume and western garb shop. The same duster, with an image of a white duster, is also available on Amazon.

Gizmodo reached out to both companies to see if they had had any agreement with the NFT project to seemingly use their products, but we did not immediately hear back.

The whole thing is bizarre in so many different ways. In a video featuring Trump promoting the project, Trump claims he’s “better than [Abraham] Lincoln, better than [George] Washington.” He then says “each card comes with an automatic chance to win amazing prizes like dinner with me. I don’t know if that’s an amazing prize but it’s what we have.”

And while your first assumption would be that all this money would go toward supporting Trump’s reelection campaign, you would be wrong, at least according to the company’s page. NFT INT LLC, the company listed as hosting the NFT auction, wrote:

“These Digital Trading Cards are not political and have nothing to do with any political campaign. NFT INT LLC is not owned, managed or controlled by Donald J. Trump, The Trump Organization, CIC Digital LLC or any of their respective principals or affiliates. NFT INT LLC uses Donald J. Trump’s name, likeness and image under paid license from CIC Digital LLC, which license may be terminated or revoked according to its terms.”

Gizmodo reached out to NFT INT to get some better understanding of how this all came together, but we did not immediately hear back.

Things get even stranger when looking at the company that’s running the auction. The company, NFT INT LLC, lists its address to a kitschy strip mall in Utah that contains a few shops and restaurants, a dry cleaners, as well as a UPS store. As Gizmodo has previously reported, companies affiliated with attempts to buy Trump’s favored social media platform Truth Social have had similar arrangements by being based out of a UPS Store mailbox.

It’s even more unclear who is operating behind the scenes. Gizmodo found two companies called NFT INT registered in California and in Delaware, which, of course, neither are located in Utah. We reached out to the individual listed as the CEO of the California-registered NFT INT LLC who told us their company was not affiliated with this project.

The Salt Lake Tribune’s report on the NFTs confirmed the strangeness surrounding the UPS Store mailbox. The Tribune also noted that while the Twitter account for the NFT project lists Florida as its business residence, there are 20 businesses in Florida listing the Utah UPS mailbox as their residence.

So if you’re really into the idea of a Trump NFT, for some reason, just be aware the NFTs are “non-refundable” and “non-returnable.” Of course, you can just do what we did and right click and “save-as,” but that would defeat the purpose of digital scarcity, now wouldn’t it?

Update 12/15/2022 at 11:00 p.m. ET: This post was updated to include info about the California-based NFT INT LLC and add additional info from the Salt Lake Tribune.