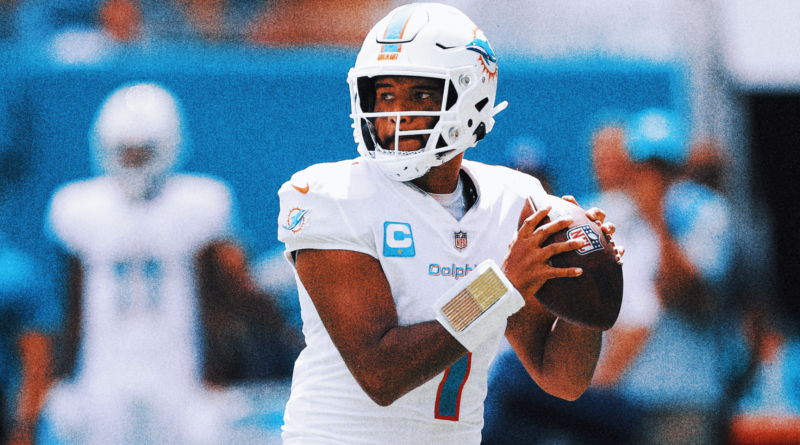 The AFC East had another rough week. As usual, the Buffalo Bills (12-3) took care of business and remain the only consistent team of the bunch. Josh Allen didn’t have the most beautiful performance against the Chicago Bears in Week 16, but even when the Bills are playing poorly, they can still pull off a blowout, as evidenced by their 35-13 win.

For the other three teams, playing poorly resulted in losses. They’re not at the Bills’ level of dominance.

The New England Patriots did what they’ve done all season: play solid defense and awful offense. The Bengals held on for a 22-18 win over New England.

The New York Jets got absolutely nothing going offensively in their 19-3 loss to the Jaguars, and in turn, the Zach Wilson era appears to be over.

For the Miami Dolphins — it’s just devastation. Tua Tagovailoa is in concussion protocol, though the team is not sure if he has a concussion. But the Dolphins have lost four straight and Tagovailoa had a three-interception game in a loss to the Packers. The turnovers sunk Miami.

It’s desperation mode for the AFC East. Well, except for Buffalo. The Bills are in overdrive to get the No. 1 seed. The rest are fighting for the seventh spot, with the Patriots getting a real chance of sneaking in with the uncertainty around Tua.

Let’s run through some basic scenarios, shall we?

The Zach Wilson era is over. Now what?

I’ll be the first to admit I thought Wilson’s time in New York would come to an end this offseason.

But I thought they’d wait until the offseason to spread the news. Instead, FOX Sports’ Jay Glazer reported that the Jets had made their decision — Wilson would be out this offseason.

“He still has a huge plan in our future, and like I said, we’re not quitting on the young man,” Saleh said Monday. “We’re going to do everything we can to develop him.”

While Saleh denied the news, it’s hard to imagine New York and Wilson patching up the tears in their relationship. It’s over.

So now the Jets are in an awkward spot.

Jets doctors cleared quarterback Mike White to play this weekend against the Seahawks. But White is dealing with multiple fractured ribs. He’ll be playing through an immense amount of pain, particularly if he takes a few shots to that ribcage. Quarterback Joe Flacco is the backup and practice-squad quarterback Chris Streveler will serve as QB3 in a Taysom Hill-style role. Streveler is a special athlete who gives the Jets an opportunity to run an oversized-wildcat. Should we call it the Lynx Formation?

Put it all together and the Jets are in a tenuous situation at quarterback, the game’s most important position, at the most crucial point in the season. It’s win or effectively begin the offseason.

As much as it could go wrong — and it’s likely to — White has a huge opportunity to be the hero.

Mike White has been cleared to return as the starting quarterback for the Jets. With Mike back, Craig Carton asks Greg Jennings what influence he’ll have on the offense, and what this means for struggling QB Zach Wilson.

“He did a great job moving the offense, sustaining drives, getting first downs, much more efficient, offense was running with some good efficiency,” Saleh said. “So, yeah, it’s a great opportunity for him.”

The Jets are already in the market for a quarterback. White is auditioning. If he gets them into the playoffs, they’ll have to consider him more seriously this offseason against their other options in the draft and free agency (Jimmy Garoppolo, Tom Brady, Lamar Jackson).

Tua Tagovailoa in an impossible position

The Dolphins quarterback is in concussion protocol and may miss time. Frankly, given the severity of his first concussion — which came one week after he showed signs of ataxia, though was never diagnosed with a concussion — the quarterback could be done for the season.

McDaniel said he wasn’t sure what caused the potential concussion. Tua played the entire game on Sunday.

Tagovailoa missing the rest of the season would be bad news for everyone, but his health should be priority No. 1. While this has been an exciting year for Miami, it cannot endanger one of its players. And the Dolphins need to be particularly careful because Tagovailoa has every financial reason to rush back to the field. The Dolphins might need to make the decision for him.

Should Tua return to play after clearing concussion protocol?

Dolphins quarterback Tua Tagovailoa was placed in concussion protocol for the second time this season following Sunday’s loss to the Packers. Nick Wright argues that Tua should be able to decide for himself whether he should continue playing after he is cleared from protocol.

It might sting that Tagovailoa is going out on a three-interception game — and a four-game losing streak. This strange and unimpressive run from Tagovailoa might even lead the Dolphins to consider their options at quarterback this offseason. Because while Tua seemed like an MVP candidate in the early and middle stages of the year, he has absolutely belly-flopped when it mattered. And those issues came down to two things: his arm strength and his apparent inability to handle psychological pressure.

Given that Tua will be eligible for a long-term extension and/or a fifth-year option, you can see why he’s doing everything to get on the field. He wants financial security.

But if he rushes back from a concussion, what might it cost him from a health perspective?

Ride or die with Josh Allen

It’s clear that Allen is not going to clean up his propensity for turnovers. I’ve written that he needs to cut it out. I’ve also written that his risk-taking is what makes the Bills offense so dangerous. And the truth is that — for now — Buffalo can’t have Electric Allen without What-Was-He-Thinking Allen. In time, Allen can hone his decision-making to limit his turnover totals, but that will not happen during the Bills’ Super Bowl run this year.

And while some of the throws he attempted in the Bills’ win over the Bears resulted in turnovers — Allen had two interceptions — those types of risky throws have resulted in touchdowns in previous games. With Allen, you take the good with the bad. In a game like the one he played on Sunday, the good outweighed the bad. The Bills still rolled over the Bears.

The Patriots have a truly unique weapon. Rookie Marcus Jones is a contributor at cornerback, punt returner, kick returner and receiver.

“He’s just ridiculous,” quarterback Mac Jones said postgame on Sunday. “Great player, great teammate, explosive, lines up, runs full speed on offense, lines up and goes full speed on defense. Same thing on special teams. Love the guy. Bummed when you have a great performance like that, we can’t pull out the win.”

While Marcus Jones is a ballhawk and a threat as a playmaker, he has had his issues at cornerback. And last weekend, he had enormous problems with the Bengals receivers. As an outside corner, Jones allowed 11 catches on 12 targets for 169 yards with no touchdowns and the interception. It was a reminder that Jones, at 5-foot-8, isn’t ready for the outside spot. He is a slot cornerback, but the Patriots thrust him into an outside role with injuries to their other top cornerback, Jalen Mills and Jack Jones. When they can, the Patriots will surely move Jones back into the slot.

Even with a bad game, Jones is an electrifying and unique talent. It’ll be fun to see what Bill Belichick cooks up for him next.