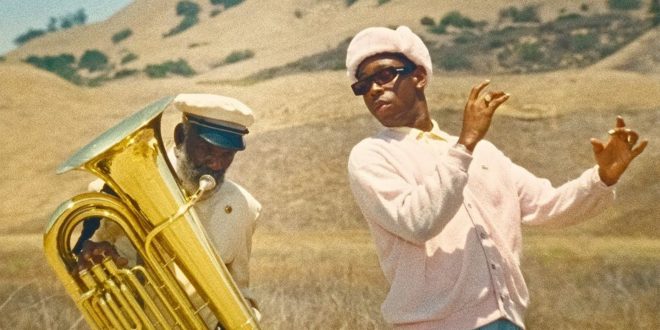 Tyler, The Creator Cruises On A Speedboat In ‘Lemonhead’ Video

Tyler, the Creator dropped a new video for his song “Lemonhead” on Thursday (July 8) and he doesn’t fail to disappoint with his zany visuals in which he appears as his alter ego Wolf Haley.

The video is under two minutes long, and it begins with Tyler briefly talking about his elderly tubist. “Mr. Bobo was a very talented individual, but I don’t think I was doing my best articulating what I wanted. I know the tuba was too heavy for him, but I needed to get this shit done,” he says.

Tyler demonstrates to Mr. Bobo how to play the instrument, eventually beginning the track. The video then transitions to Tyler cruising on a speedboat, sailing through a mountainous field while rapping his heart out before jumping off with his briefcase. To some fans, the setting may be familiar; it resembles his recent iconic BET Awards performance in which he rode a retro car before departing with his luggage.

Later in the video, Tyler is surrounded by parked pastel cars matching his snazzy fit. The video ends with him riding on a penny-farthing bike, away from the camera view.

“Lemonhead” is the third track on his latest studio album Call Me If You Get Lost, which was released June 25, and also the third song to receive a visual treatment after “Corso.” The album debuted at No. 1 at the Billboard Top 200 Albums chart at 140.1 million song streams, beating Doja Cat’s debut album Planet Her. Tyler also unseated Doja in charting No. 1 on both the Billboard Artist 100 chart and the Rolling Stone Artists 500 chart.

Tyler’s previous LP, Igor, similarly opened at No. 1 on the Billboard 200 Albums chart when it was released two years ago. Prior to that, he released four studio albums, each making it to the Top 5.