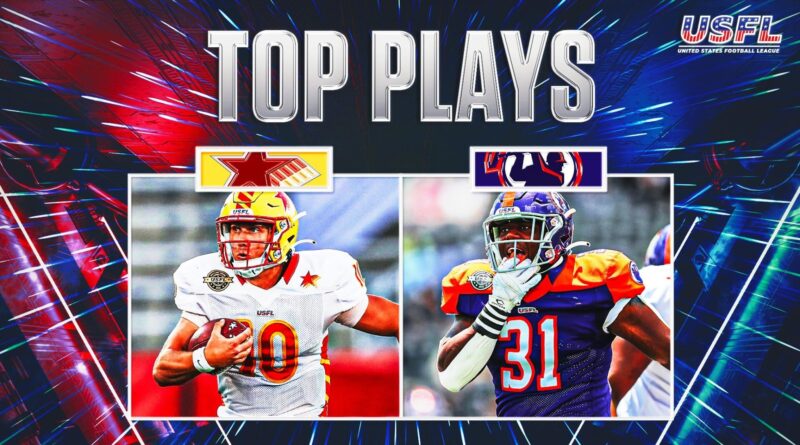 Week 9 of the USFL season came to a close Sunday on FS1 with a down-to-the-wire matchup between South Division rivals Philadelphia and Pittsburgh.

Earlier Sunday, the New Orleans Breakers took down the Tampa Bay Bandits, 17-6, to clinch the final spot in the inaugural USFL playoffs in Canton, Ohio.

Here are the top plays from the late game.

The Stars got off to a hot start, picking off Maulers QB Vad Lee near the red zone to take over. Philadelphia took a 3-0 lead after nailing a 47-yard field goal midway through the first frame after the turnover.

Lee redeemed himself on the following drive, connecting with tight end Hunter Thedford for a 23-yard gain. Then, the Maulers knotted things up with a monster 59-yard field goal to keep things close.

Misfortune struck the Stars early in the second quarter, however, when Matt Colburn fumbled near midfield.

Tricks up their sleeves

The Maulers came out strong once they got the ball back. First, they picked up a huge first down on a fake punt on fourth-and-3.

Then, with momentum on its side, Pittsburgh found the end zone on a fake field goal to take a 10-3 lead.

How’d he catch that?

The Stars’ defense showed up in a big way, intercepting Lee’s pass to keep the Maulers in check.

The Maulers quickly returned the favor, picking off Cookus to close out the first half.

After a wild 32-yard catch by Maurice Alexander put the Stars on Pittsburgh’s 5-yard line, Philadelphia tied things up in the third quarter with a short TD run from Paul Terry.

The Maulers opened up the fourth-quarter scoring with a smooth TD from Lee to wideout Tre Walker to put Pittsburgh ahead, 16-10.

A fumble by the Maulers turned into six points when Colburn scampered 51 yards to give Philadelphia a one-point edge, 17-16, late in the frame.

The Philadelphia Stars took a fourth-quarter lead behind a 51-yard rush by RB Matt Colburn.

The Stars’ defense continued to show out, as the Maulers fumbled the ball once again on the following drive.

The Maulers had one last chance to come away with the win, but they couldn’t connect on a 49-yard field goal.