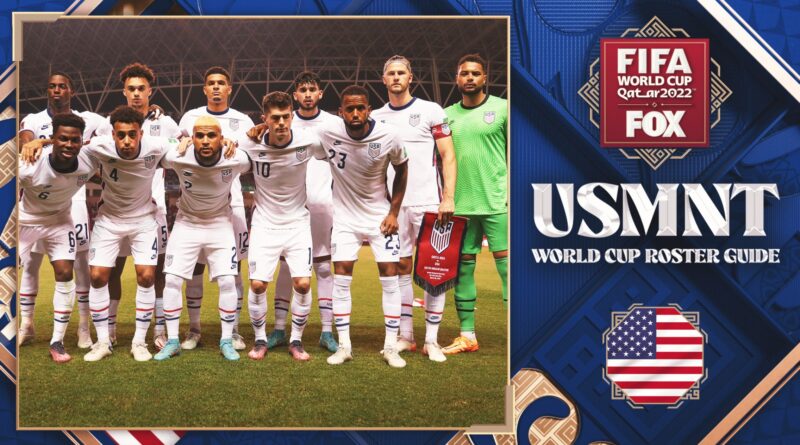 The United States men’s national team released its 26-man roster for the 2022 FIFA World Cup in Qatar on Wednesday and while most of the key players were called up, there were a handful of notable exclusions and arguably even more notable inclusions.

Below is a comprehensive guide of the USMNT World Cup roster with expert analysis from FOX Sports soccer writers Laken Litman and Doug McIntyre.

A somewhat surprising inclusion, Horvath wasn’t part of the squad during World Cup qualifying and he made a costly positioning error in his most recent US appearance, a 1-1 tie in El Salvador in June. [Who is Ethan Horvath?]

We still don’t know who will be the USMNT starting goalkeeper this World Cup, but Johnson is certainly high on Berhalter’s list. The 33-year-old came up huge for New York FC this MLS season, posting 14 clean sheets (second best in the league). He also was clutch during the playoffs, though his team ultimately lost in the semifinal. [Who is Sean Johnson?]

Turner didn’t even begin to take soccer seriously until, at age 15 in the summer of 2010, he caught World Cup fever watching Clint Dempsey, Landon Donovan and Tim Howard lead the U.S. into the knockout stage. [Who is Matt Turner?]

Just 22, the highly skilled right back has already played for three of Europe’s most iconic clubs. He broke through with Dutch giants Ajax, moved to Barcelona a year later and joined Milan on loan in August. Dest, who can also man the left side of defense or either wing, scored one of the best goals of qualifying, a curling left-footed shot that gave Costa Rican keeper Keylor Navas (a three time Champions League winner with Real Madrid) no chance. [Who is Sergiño Dest?]

The 29-year-old starting center back is a two-time MLS Defender of the Year for Nashville SC. In April, he signed a designated player contract that made him one of the highest paid defenders in league history and team general manager Mike Jacobs called him “our Tom Brady.” [Who is Walker Zimmerman?]

Tim Ream’s inclusion in the United States men’s national team’s World Cup roster was a bit of a surprise. It’s not that Ream’s performances with Fulham in the Premier League didn’t warrant a call-up; it’s that he wasn’t called up during the September window in spite of those performances. In fact, his last appearance for the USMNT was in September 2021. So what changed? [Who is Tim Ream?]

Carter-Vickers, the 24-year-old son of former NBA player Howard Carter, has become a regular starter for Celtic this year. He’s played in six consecutive matches since returning from an injury and has appeared in 10 league matches and four Champions League matches this season. He’s also led his team as captain. [Who is Cameron Carter-Vickers?]

Long, 30, is the presumed starter alongside Walker Zimmerman at center back. Ever since Miles Robinson tore his Achilles tendon earlier this year, Berhalter has been searching for a worthy replacement and as of right now, Long seems to be the No. 1 choice. [Who is Aaron Long?]

The starting left back has actually gone by the name “Jedi” since he was five years old. The nickname comes from his love for Star Wars as a kid — dressing up as characters and watching all the movies — and it’s just stuck. He prefers it that way and even introduces himself to people as Jedi instead of Antonee. [Who is Antonee Robinson?]

Moore, 26, is one of Walker Zimmerman’s teammates on Nashville SC, which could give the USMNT some familiarity and continuity along a back line that needs some of that. Moore has 15 caps with the national team, making his debut in 2018 during a friendly against Ireland. He was an important player in helping the Americans win the 2021 CONCACAF Gold cup, and more recently was called in for four 2022 World Cup qualifying matches. [Who is Shaq Moore?]

The only player on this roster with any World Cup experience. Yedlin, 29, was a young defender on the 2014 team that went to Brazil and made it to the Round of 16. He was the second-youngest player on that roster at 20 years old then with just four USMNT caps. He came off the bench in all four matches. [Who is DeAndre Yedlin?]

He’s only 19, but the versatile fullback played his way onto the roster by starting every game this season for German Bundesliga club Borussia Mönchengladbach. [Who is Joe Scally?]

A tireless running, ball winning defensive midfielder, Adams is perhaps the most irreplaceable player on the U.S. roster. Mature beyond his years, he’s a leader on and off the field. [Who is Tyler Adams?]

Another young player on the radar for top European clubs, the 19-year-old Musah will play a vital role in the midfield for the USMNT. [Who is Yunus Musah?]

The jokester of the U.S. men’s national team, Weston McKennie is that guy who sits in the back of a Tyler Adams news conference and pretends to ask serious (and silly) questions or comes up behind Christian Pulisicduring a TV interview and makes a funny face. The 24-year-old who plays for Juventus is a Harry Potter fan and likes to play tricks on his teammates with mischief of his own. [Who is Weston McKennie?]

Fresh off the MLS Cup final, the 27-year-old midfielder is ready to play in the World Cup. It will be his first World Cup in his nine-year career, though he did play in five qualifying matches in 2017 when the USMNT failed to clinch a spot in the 2018 World Cup. So had the U.S. gone to Russia, Acosta likely would have been on that roster. [Who is Kellyn Acosta?]

The 27-year-old midfielder adds some experience to an otherwise young group going to Qatar. Roldan has been a regular starter with the Seattle Sounders since he was drafted by the club in 2015 and made his senior national team debut at the 2017 CONCACAF Gold Cup. [Who is Cristian Roldan?]

Still just 19 (until Nov. 13), Reyna is nothing less than American soccer royalty. The son of two-time U.S. World Cup captain Claudio Reyna and U.S. women’s national team winger Danielle Egan, he’s also one of the brightest talents the United States has ever produced. [Who is Gio Reyna?]

The playmaker is going into the tournament with a leg injury but still makes the roster. It’s a safe bet; De la Torre is expected to be healthy before the Americans’ Nov. 21 opener against Wales. [Who is Luca de la Torre?]

One of the more exciting breakout U.S. stars to keep an eye on, the 22-year-old attacking midfielder plays for Leeds United in the English Premier League is known for his quickness and ability to impact and contribute to a game. [Who is Brenden Aaronson?]

The USMNT’s headliner, Pulisic is also the squad’s most dangerous attacking player when at his match-winning best. The shifty winger, who can unbalance even the stoutest defense with his one-on-one dribbling, broke into the senior team at German talent mill Borussia Dortmund at age 16 nearly seven years ago and hasn’t looked back. [Who is Christian Pulisic?]

In 2021, few players had better cases to make the United States men’s national team’s World Cup roster than Jordan Morris: he was named to the MLS Best XI and then secured a loan to English Second Division club Swansea City. But in his fifth appearance for the Swans, Morris sustained a torn ACL in his left knee that sidelined him for the remainder of the season. [Who is Jordan Morris?]

His father is George Weah — the 1995 FIFA World Player of the Year and current President of Liberia — but you’d never know it when you first meet Tim. His teammates and friends describe him as humble and someone who wants to earn everything on his own. [Who is Tim Weah?]

The 22-year-old winger’s claim to fame is that in May 2017, at age 17, he became the youngest U.S. player to score at the U20 FIFA World Cup. He went on to score four goals at the tournament and win the Silver Boot. [Who is Josh Sargent?]

The son of former Colombian international (and onetime MLS MVP) David Ferreira, Jesus joined the FC Dallas academy while his father was playing for the club, which inked the younger Ferreira to a professional contact in 2017. [Who is Jesús Ferreira?]

The 24-year-old striker is buddies with Christian Pulisic and Weston McKennie. The three of them played together at the 2015 U17 World Cup and were reunited over the summer when Wright was called into USMNT camp. Now they’ll get to play together on the full team at the 2022 Qatar World Cup. [Who is Haji Wright?]