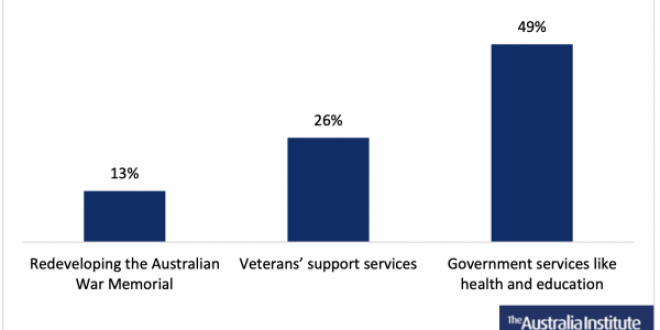 The Australia Institute surveyed a nationally representative sample of 1,006 Australians about the proposed $500 million redevelopment of the Australian War Memorial in Canberra. The Memorial’s redevelopment will include a southern entrance refurbishment of the main building, a new Anzac Hall connected to the main building, an extension to the Bean Building to establish a research centre, and public space improvements.

“This research by The Australia Institute confirms that the Australian public would prefer to see this money spent on support for veterans.

“The Australian War Memorial in its current form encourages reflection and tribute.

“As Chief of the Defence Force, I saw the solemn impact that the memorial had on foreign military visitors. It is, and should remain, a commemoration of those who lost their lives and those who survived but were deeply affected by war.

“This proposed expansion would see it become a place of cheap tourist entertainment. It is unconscionable.

“I urge the Government to reconsider the project, and to spend the money on services to assist veterans, such as support for people suffering from PTSD.”

“The Federal Parliament and the Australian War Memorial are unique national symbols. They are central to our history and their integrity should be beyond the ambitions, vanities and whims of a passing few.

“The AWM project has created a historic crisis in the national capital – and its story. If it proceeds Australia and its people will have lost a national treasure.

“Once its purpose is lost sight of it will never recover and future generations will be the poorer for this shameful distortion of our history.”

“This survey by The Australia Institute confirms that there is widespread opposition to spending half a billion dollars on this project.

“The redevelopment, including the bulldozing of ANZAC Hall, is an act of vandalism.

“The project is only going ahead because the government has succumbed to pressure. The doubling of size for a display area in no way compensates for the heritage damage caused by the project.

“Given the lack of support and the damage to heritage, there is no excuse to go ahead with the project under the guise of supporting veterans. We should not be building a Khaki Disneyland.”

“The $500M development of the Australian War Memorial is a gross overreach and will have serious adverse impact on the heritage listed site.

“It’s simply tragic to know that excellent concepts for development exist which provide the additional space required without destroying the site’s National and Commonwealth Heritage listed attributes, and at considerably less cost.

This ‘bigger is better’ museum approach is a simplistic and narrow view of what is needed there, and does not value or understand the commemorative power of the existing site.

“The EPBC Act has failed to protect the Australian War Memorial from overdevelopment. Despite statements to the contrary, little attention has been paid to any recommendations for design amendment, including those from the government’s own advisor on heritage matters, the Australian Heritage Council.

“All the identified impacts to the listed heritage values of the site remain in this development; and we are about to lose something which is extraordinary and unique.”

“The poll from The Australia Institute is absolutely consistent with every other bit of evidence of strong opposition to the AWM redevelopment, including public submissions to formal processes and media comment.

“It’s a national disgrace that the AWM’s surveys, which they use to claim strong support for the project, had highly leading questions and biased information which was clearly intended to deliver the desired results. They should have engaged in more listening and less spruiking from the outset.”

“This polling exposes yet again the Australian War Memorial’s repeated attempts to mislead the people – and the parliament – about the level of public support for their redevelopment proposal in its current form.

“With only 13% of Australians surveyed supporting the expenditure and an overwhelming majority of submissions to both the NCA and Public Works Committee opposed, we call again for a rethink.

“The tremendous service of our current and former defence personnel can be better recognised without going down this destructive and deeply unpopular path.”

“It is good to have reliable polling data that supports Heritage Guardians’ long-held feeling that the Memorial project is not wanted by most Australians. By contrast, the Memorial’s own “surveys” have been notable for their leading questions, lack of context, and dishonest reporting. A project based on spin and misrepresentation should never have got this far.”

/Public Release. This material comes from the originating organization and may be of a point-in-time nature, edited for clarity, style and length. View in full here.