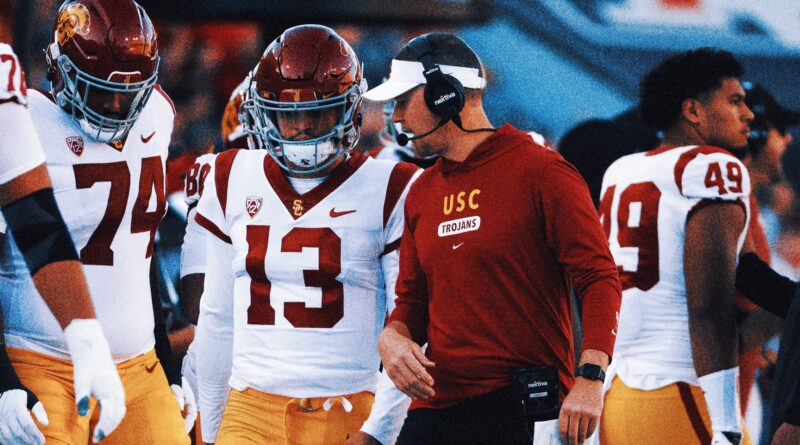 “If you don’t have requisite quarterback play in college football, you’re not going to be a great team.”

That is Joel Klatt’s take when it comes to measuring the parallels between QB play and wins in college football. And no one has proven that point to be more accurate than USC coach Lincoln Riley.

Riley, who led the Trojans to an 11-2 regular-season record in his first year at USC, is about to complete his sixth season as a college football head coach. He spent his first five years at Oklahoma, guiding the Sooners to a combined 55-10 mark, which included three conference titles, three trips to the College Football Playoff and a top-10 ranking in the final AP Poll all five seasons.

But as remarkable as those numbers are, one could make the argument that Riley’s greatest measure of success as a coach has been the play of his quarterbacks.

Since Riley became a head coach at Oklahoma back in 2017, he has had five starting quarterbacks, four of which have been Heisman Trophy finalists, and three of which have won the Heisman.

“That’s a staggering thought,” Klatt said on a recent episode of his podcast, “The Joel Klatt Show.” “What Lincoln Riley is doing with quarterbacks is totally unprecedented. We’ve never seen something like this before.”

“When you look at those guys, this is not the exact same player,” Klatt said. “They aren’t cut from the exact same mold. They don’t play the game the exact same way. They have strengths, they have weaknesses, and they are all very different.”

While every starting quarterback to play under Riley did possess their own unique characteristics, they also had plenty in common. They were all extremely accurate passers, they all took care of the football, and most importantly, they all won a lot of football games.

“This is a guy that understands what he has in front of him and how to be successful,” Klatt said of Riley. “If I’m a QB out there, there are only a handful of places I’m really taking a hard look at, and you know exactly where they’re at.

But when it comes to coaching the quarterback position, there is one trait of Riley’s that stands out to Klatt above the rest.

“He doesn’t coach the creativity out of them,” Klatt said. “A lot of times, coaches get so concerned with mistakes that they turn players into robots, and they lose what made them really good.

“There is a certain level of creativeness and artistic nature to the quarterback position, and you cannot play it like a robot. The best ones have a beauty about the way that they play.”

That includes Williams, who barring any type of unforeseen change, will be back under center in Riley’s offense next season. The reigning Heisman Trophy winner is ineligible to enter the 2023 NFL Draft, being only two years removed from high school.

The thought of those two pairing up for another season in Los Angeles has to be scary for the rest of the college football universe.

“Lincoln Riley has proven out now in his short time as a head football coach that he is gonna allow his quarterbacks to flourish in his offense,” Klatt said. “And the quarterbacks are.”