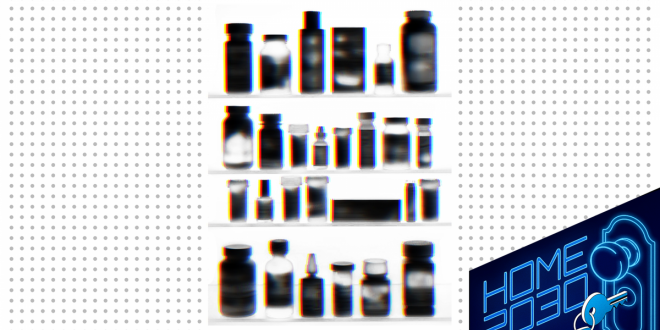 What You’ll Find Inside Medicine Cabinets in 2030

The modern medicine cabinet is filled with all sorts of things, from pain relievers and birth control pills to antibiotics and bandages. And if your medicine cabinet is like mine, it’s also packed with tons of useless stuff—like mystery creams, expired prescriptions, and a disturbing number of ambiguous pills.

No doubt, medicine cabinets can be a busy, chaotic place, which only makes sense given the complexity of human health and the numerous methods used to treat diseases, injuries, and other health issues. As we gaze into the near future, however, it seems our medicine cabinets are in for a significant overhaul. Indeed, steady advances in medical technology are poised to revolutionize therapeutics and the way we take care of ourselves at home.

By the 2030s, the drugs in our cabinets should be considerably more personalized than they are today. This development, says Olivier Elemento, a professor of physiology and biophysics at Weill Cornell Medicine, will be driven by dramatically reduced costs associated with genome sequencing and an improved understanding of the interplay between medicines and genomes. As Elemento also pointed out, more treatment options will become available in the future, as new drugs are already getting approved at an accelerating rate.

“So I would envision that everybody’s medicine cabinet will be quite different from each other,” he explained in an email. The types of medications prescribed, the combinations, and the dosages “will be much more personalized than they are now,” said Elemento, and they’ll be “based on your genes.”

J. Ruben Morones-Ramirez, lead scientist of the NanoBiotechnology Research Group at Universidad Autónoma de Nuevo León in Mexico, agreed that future medicines will be personally designed, saying this will be done to ensure the medicinal “compatibility for each human being,” he predicts. What’s more, our future gene sequencing capacity will allow us to design therapeutics, such as antimicrobials and antivirals, against infectious pathogens.

“Development of therapeutics against viral and bacterial disease will be cheaply and quickly designed and produced,” he said in an email. “In case of an infection, patients will be able to take a test, sequence the probable pathogens causing the infection, and the appropriate therapeutics will be designed, produced, and delivered to their door,” said Morones-Ramirez.

Personalized medicine of this nature will likely be expensive and not available to everyone, particularly in the United States, where universal healthcare does not yet exist. The medicine cabinet of the 2030s, it’s fair to say, won’t suddenly appear across the board. But, hopefully, these and other medicines will slowly become accessible to all people and, fingers crossed, become less expensive over time.

A surprising addition to the medicine cabinet of the 2030s will be bugs, or more precisely, living microorganisms.

Indeed, our microbiomes—the entire collection of microbes that inhabit our bodies—are known to play important roles in health and disease, as Peter Q. Nguyen, a research scientist and molecular biologist from the Wyss Institute at Harvard University, explained in an email.

“This is the concept behind ingesting or colonizing oneself with beneficial microbes, or probiotics,” he wrote. “But what if we could engineer these microbes to generate therapeutic molecules inside of us?”

Nguyen envisions fleets of engineered bacteria that function as programmable factories, producing the required drugs on demand directly inside our bodies.

“No longer would we need to produce a drug in a centralized factory, purify it, package it, ship it, store it, and take it up to multiple times a day,” he said. “Instead, these engineered microbial factories will colonize your gut and continuously generate your therapeutic of choice inside of you for days, weeks, or months.”

In the event we no longer need or desire these internal drug factories, all we’d have to do is drink a special solution containing a harmless chemical that activates an engineered genetic circuit, resulting in the microbes being flushed from our bodies, Nguyen said. Genetic circuits for probiotic bacteria in animals have already been developed, in addition to the associated kill switches, but “a robust system to precisely control colonization of engineered probiotics in humans has yet to be shown,” he added.

Likewise, Morones-Ramirez believes most of our future medicines will be alive.

“Living therapeutics are made up of a living cell or microorganism that will be incorporated to a synthetic material for delivery,” he explained, “but the living part of the therapeutic is the part that will allow the dynamic behavior of sensing, diagnostic, and production” of therapies or interventions inside the body and “at the site of disease,” he explained. Morones-Ramirez said these therapeutics could eventually be used to treat cancer and various infectious diseases.

To which he added: “Very importantly, medicines in the near future will be made up of genetically modified living cells, microorganisms, and/or phages and viruses, which will make our therapeutics much smarter.”

In general, Morones-Ramirez believes our medicines will steadily improve over time. Eventually, some super-sophisticated therapies will require the use of nanoscale robots with multiple functionalities to cure different diseases, he predicts. Future therapies will be “designed to monitor, detect, and signal abnormal biological function,” said Morones-Ramirez. Working inside us, these possible interventions will be “programmed to produce and deliver a specific therapeutic after detecting abnormal functions in our bodies.”

We should also expect to see medicines that target biological aging. Matt Kaeberlein, a pathologist at the University of Washington and an expert on the biology of aging, hopes to see these types of medications in wide use by the 2030s.

“These 21st-century medicines will work to keep people healthier longer by slowing or reversing the functional declines of aging by targeting the molecular mechanisms of biological aging,” Kaeberlein said in an email. “This is in contrast to what I think of as 20th-century medicine—or even 19th-century medicine—which is what most people have now, which acts to try to ‘cure’ disease in sick people or, more often, just alleviate the symptoms.” A shift toward drugs to prevent disease, as opposed to treating disease, is a development Elemento also foresees.

Thanks to the advent of large health databases, such as the All of Us research program and UK Biobank, scientists are getting better at finding which “existing medications and supplements may decrease risks of developing diseases,” explained Elemento, adding that, crucially, scientists are “starting to understand that the efficacy of such drugs for disease prevention also depends on your genes.”

For decades, various drugs and drug combinations have been used to treat an array of psychological disorders. Mark Elliott, a psychiatrist and expert in the management of psychopharmaceuticals, isn’t so sanguine when it comes to the future of prescription brain drugs, saying that current approaches aren’t likely to change much in the next two decades.

“It has been over 30 years since a meaningfully novel class of pharmaceutical drug for mental health was discovered,” he explained in an email, pointing to the development of SSRIs, such as Prozac, in the late 1980s. Innovations since that time are “essentially minor modifications of pre-existing chemicals,” he said.

The “pharmacopeia” hasn’t changed much in the past 30 years, but scientists have started to shift their attention to—and also their approval of—different classes of chemicals, namely cannabinoid compounds, ketamine hydrochloride, and psilocybin, among other psychedelics, as Elliot explained. Accordingly, the medicine cabinet of the 2030s will continue to carry items like cannabis, but also drugs not typically found in our bathrooms.

“I imagine that there will be an ongoing shift toward utilizing, repurposing, and modifying older chemicals, plant-based chemicals, and historically illicit chemicals for medicinal use, some of which may find their way into our medicine cabinets,” said Elliot.

More seemingly radical treatments, like using MDMA to treat post-traumatic stress disorder, may eventually come into use, though it’s not clear if this will happen any time soon or if such interventions might make their way into our medicine cabinets, as Elliot told me during a video call. It’s important to point out that pharmaceutical companies are very invested in this research, particularly the use of psychedelics, and the affordability of these interventions should not be assumed. We also don’t know when these products might become available.

It’s also worth pointing out that medicine cabinets don’t just contain drugs—they also contain things like bandages. So what might a bandage look like in 15 years? If recent research from ETH Zurich and the National University of Singapore pans out, we could see a bandage that helps blood to clot without sticking to the wound. In tests, this was made possible by a new material that triggers blood clotting, while at the same time repelling blood itself.

Equipped with this fantastic new material, “we can avoid reopening the wound when changing the bandage,” Athanasios Milionis, a co-author of the study, explained in a 2020 statement. “Reopening wounds is a major problem, primarily because of the risk of infection, including from dangerous hospital germs—a risk that is especially high when changing bandages.”

Other possibilities for the 2030s include bandages that deliver drugs to the body (while leaving no scars), bandages that pull skin together for rapid healing, and electronic bandages that likewise speed up the healing of wounds.

When it comes to wound healing in the 2030s, Michelle Oyen, a biomedical engineer at East Carolina University, predicts we won’t need bandages or even modern hydrogel strips. Instead, we’ll use “tissue engineered bandages that would repair the skin instead of just covering it,” as she explained in an email. These bandages would be comprised of skin cells grown in the lab and then placed on the injury. Tissue-engineered skin, in addition to treating wounds, could also be used to treat conditions such as vitiligo, melanoma, psoriasis, and blistering disorders.

We should also expect our future medicine cabinets themselves to be, uh, more futuristic.

Elemento said the cabinet of 2030 will be smarter, monitoring our medicine intake, sending us text messages when we forget to take our pills, and automatically making sure that our refills get shipped to us when we run out. He also envisions smart electronic pills that, once ingested, inspect our stomach and colon for early signs of diseases, including cancer and auto-immune disorders.

Smart pills—ingestible capsules equipped with micro-electronics—do appear to be a rising trend; the global smart pill market, including tools and technologies in support, is expected to reach $6.34 billion by 2026. These pills work by recording important biomarkers related to health and then relaying that information to a device worn by the patient. In addition to diagnosing disease, smart pills can be used for targeted drug delivery, patient monitoring, and medication adherence.

When it comes to drug delivery, Oyen says we won’t have to fuss over pill cases or bottles, as drugs will be delivered by controlled-release technology.

“You might have a capsule of drug to refill your device every week or two, like the modern insulin pumps, but especially for drugs that historically had to be taken daily—like birth control pills, cholesterol or blood pressure medication, and so on,” she said, adding that “this is a game changer that is coming soon.”

Likewise, Elemento expects to see fewer pills in our future. We will “increasingly move towards 3D-printed pills,” he said, in which “a single pill can include many drugs,” in a development he says will likely increase medication adherence. What’s more, Elemento hopes to see the medicine cabinet, so to speak, expanded to include health strategies that aren’t dependent on drugs.

“I hope we will have figured out better ways to personalize diets and physical activity programs to improve adherence and engagement, making it easier to include these as part of our daily routine,” he said.

Exciting medical innovations like these should be made available to everyone, but many glaring shortcomings currently exist in healthcare, disproportionately affecting already marginalized populations. Drastic improvements are badly needed in the world’s various healthcare systems. Here’s hoping these many fantastic speculations become as unremarkable as a bottle of aspirin by next decade.