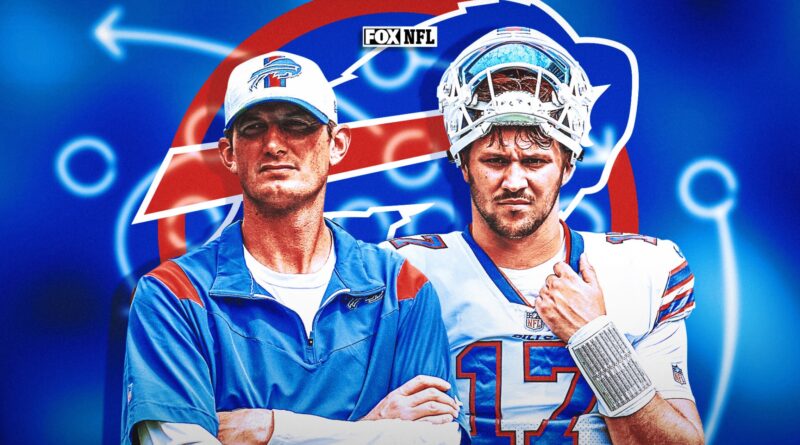 Ken Dorsey and Josh Allen each lost control of the football game — and of their emotions — in the fourth quarter of the Miami Dolphins‘ win over the Buffalo Bills on Sunday.

Up in the booth, Dorsey smashed his tablet and chucked his notes and playsheet in the immediate aftermath of the Bills’ loss. In the closing minute of the game, Buffalo ran out of clock and timeouts. With about one minute left, the Bills hovered just out of field-goal range, excruciatingly close but not quite there, moving back and forward around Miami’s 45-yard line.

Then with 18 seconds left, Allen eluded the rush and, seemingly in a panic, checked down to receiver Isaiah McKenzie, who couldn’t get out of bounds. The Bills did not have enough time to get back to the line of scrimmage to clock the ball, and they couldn’t even attempt a field goal.

Allen probably shouldn’t have thrown the ball and McKenzie probably should have immediately gone down. And, of course, Dorsey probably wishes he’d done a little better preparing his guys for these types of moments. Hence the outburst.

Allen lost his cool, too. In the fourth quarter, he attempted to rip the helmet off a Dolphins defensive lineman after a scrum developed on one of his carries. Allen’s antics seemed to draw a chippy response from Miami. Linebacker Jerome Baker stuffed Allen on a quarterback run near the goal line, then held him on the ground for a few extra seconds.

And so the Dolphins took control of the AFC East after three weeks of regular-season play. We’re a long way away from the postseason, but a lead is a lead. Miami is the No. 1 team in the division and it can’t feel good in Buffalo, where the Bills expect to sit atop the division — and the NFL — at the end of the season and postseason.

These outbursts of emotion — and this feeling of a letdown — can happen to teams that put pressure on themselves. They have to move on.

The game was a quality win for Miami but not necessarily a replicable one. The Dolphins had 212 total yards to the Bills’ 497. In the past 16 years, NFL teams are 2-106 when being outgained by at least 275 yards. And the 2022 Dolphins nabbed one of those wins.

So if the Dolphins want to beat the Bills again, they’re likely going to have to devise a different game plan — or execute this one better — to get the W.

The Bills were working through a ton of injuries to their starters. They were working with backups at cornerback, safety, receiver and defensive tackle. The weather in Miami was also very hot. The Dolphins certainly had a number of factors working in their favor.

The Dolphins delivered an impressive and tough performance in the face of adversity. But Allen and Dorsey will get another shot at Miami. The Bills will be fine. They don’t need to go scorched-earth. The sky isn’t falling. Buffalo just needs to stay steady.

Jones’ X-rays came back negative, per multiple reports. The Patriots expect Jones to get a final diagnosis of a high ankle sprain, an injury that’s likely to keep him out for at least a few weeks. If he ends up on IR, he’ll miss at least four weeks.

The Patriots have veteran Brian Hoyer and rookie quarterback Bailey Zappe on the roster. Quarterback Cam Newton, the team’s starter in 2020, is a free agent.

So now, the biggest problem for the Patriots’ offense will be Jones’ ankle injury. Yes, New England lost in disappointing and chaotic fashion to the Baltimore Ravens 37-26. But it’s only Week 3. The Patriots are the kings of starting the season with a losing record before somehow making the playoffs. So a tough loss isn’t the end of the world in New England.

But an injury to Jones? That’s an enormous problem.

He seemed to be in excruciating pain after Calais Campbell landed on his ankle and twisted it in grotesque fashion. Jones hopped off the field and directly into the locker room.

“We all know that whatever’s going on, he’s going to do his best to get back on the field as fast as he can,” Damien Harris told reporters after the game.

Prior to the injury, Jones was playing more aggressively than he has ever played before. He was firing the ball downfield to DeVante Parker and Nelson Agholor. Parker finished the game with a career-high in receiving yards for a single game (156). Jones threw nine of his 32 passes at least 20 yards past the line of scrimmage. That’s a hefty portion.

But I can’t imagine New England was happy with its passing offense. Jones finished 22-of-32 for 321 yards with zero touchdowns and three interceptions. And Jones’ connection — or lack thereof — with Parker should go under the microscope. Jones threw three interceptions with every single turnover targeted for Parker. In fact, all five of Jones’ interceptions in 2022 have gone in the direction of Parker. The wideout is Jones’ version of no-risk-it-no-biscuit. The problem is that they’re not quite on the same page.

The latest example was in the red zone when Jones fired to a spot where Parker didn’t plan to be. At the line of scrimmage on a third-and-goal from the 10, the quarterback signaled to audible into the second play from the huddle — then checked back into the first (and original )play. Parker didn’t get the memo. He ran the wrong route and left Jones hanging.

Of course, it’s hardly all Parker’s fault. Jones has simply been too aggressive in most other instances. He seems to be pressing and, in turn, doesn’t see the player in coverage who makes the interception. That’s not a problem Jones had in 2021. But against the Ravens, Jones’ two other interceptions were instances where he simply should not have thrown the ball to Parker.

Are these the growing pains for Jones, who was extremely conservative in 2021? Because if Jones can develop the proper risk threshold for downfield passing, he could be the team’s future at quarterback. And it has only been three games. These mistakes should be fixable.

Here’s the next question: Can Jones correct these mistakes? Can the coaching staff help correct these mistakes? The Patriots seemed to slow (or reverse) his development by attempting to change their offensive scheme this offseason. Many of those changes were such a flop that the team has abandoned them. They’re mostly back to running their old offense, which they didn’t get to rep enough in the offseason. And it is showing.

So there should be some questions about the decision-making that’s happening around Jones. His development is dependent upon his coaches’ abilities. Bill Belichick’s track record of developing quarterbacks is impressive. Matt Patricia and Joe Judge do not have that same reputation.

And the biggest issue is that we won’t get an answer to these questions anytime soon. With Jones set to miss time, the Patriots won’t get to do the on-field work that the QB clearly needs.

The Jets‘ situation is boiling over

One week after an incredible comeback, the Dolphins proved they were not a fluke. They’re among the NFL’s best teams.

One week after an incredible comeback, the Jets regressed and took a loss to the Cincinnati Bengals, who had been winless heading into the game.

I just don’t get the sense that the Jets are coached well enough. They make way too many mental errors. And there’s clear tension between the coaches and players. Quinnen Williams and Jets defensive line coach Aaron Whitecotton went after each other on the sideline during the middle of the game.

“Quinnen wanted a four-man rush,” coach Robert Saleh said during a postgame press conference. “He was challenging us as coaches to give him his four-man rush so he could move into one-on-one, which, deservedly, he’s not wrong. He’s fine.”

Saleh added: “I love the fire. I love all of it. Obviously, we don’t need them to go jawing at each other, but he is being competitive, so he was fine.”

That’s just one example of the team’s emotion getting the better of them. Another example was when John Franklin-Myers committed an unnecessary roughness penalty on third down that extended a Bengals drive, which ended with a touchdown.

On that touchdown, Jordan Whitehead missed a tackle, because he was too aggressive with the hit. Whitehead looked more concerned with laying down the hammer and less concerned with fundamentals. And as a result, Tyler Boyd sprung free for a game-changing play.

Then in the closing minutes of the fourth quarter, Corey Davis got into a scuffle and committed an unsportsmanlike conduct penalty at the Bengals’ 14-yard line. New York failed to convert on fourth down from the 6-yard line just two plays later. It was just a devastating mental error.

There was another unnecessary roughness call. There was a blown coverage on Ja’Marr Chase’s touchdown reception at the goal line. There were so many more mistakes. It was ugly.

The Jets won’t start winning until they stop beating themselves. I hate to use a cliché, but it’s true. And Saleh needs to take charge and make his players accountable for their mistakes.