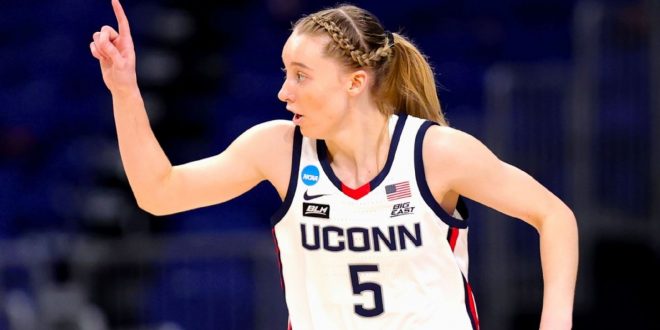 The 2021 NCAA women’s basketball tournament began with the better-seeded team winning every game on the first day, only to have the most teams outside the top-four seeds reach the Sweet 16 since 2013.

But now that the most unusual tournament in history, played entirely in San Antonio and the surrounding area because of the COVID-19 pandemic, is down to four teams, it has taken on a more familiar feel. For the fourth consecutive tournament, at least three No. 1 seeds advanced to the women’s Final Four. UConn, Stanford and South Carolina were all favorites in their regions and have plenty of history on this stage. No. 3 seed Arizona is 2021’s outlier. The Wildcats are the fourth first-time Final Four participant in the last six tournaments.

Can Arizona shock everyone? Is UConn destined for a 12th NCAA title? Will South Carolina finish what it wasn’t given the opportunity to a year ago when the tournament was canceled? Can Stanford, the No. 1 overall seed, break through with its first championship in 29 years?

Here’s a look at how all four teams could hoist the championship trophy, followed by Final Four picks from our ESPN panel.

Reason to be excited: UConn has reached a 13th consecutive Final Four without a senior on the roster. Winning the championship for the first time since 2016 — and the ESPN Basketball Power Index (BPI) gives the Huskies a 44% chance to do so — could mark the birth of another UConn dynasty. And as routine as UConn in the Final Four has become to observers of the game, this is brand new to all but two players on the roster — juniors Christyn Williams and Olivia Nelson-Ododa, who played against Notre Dame in the national semifinals in 2019. Freshman Paige Bueckers, who is getting her first taste of the Final Four, has outperformed the already lofty expectations and could have a weekend and career ahead of her of historic proportions.

Reason to be concerned: It’s difficult to find a downside for a team that has gotten even better since 6-foot-3 freshman Aaliyah Edwards entered the starting lineup and with Williams and fellow junior Evina Westbrook playing their best basketball of the season. Edwards became a starter only after fellow freshman Nika Muhl was injured. That, plus the inevitable shortening of the rotation as the games get bigger, has left UConn with a thin bench. Sophomore Aubrey Griffin was the only non-starter to play against Baylor in the regional final. Foul trouble, especially to Nelson-Ododa and Edwards — who each finished Monday’s game with four fouls — could be a trouble spot.

The Huskies will win if … they get the kinds of contributions they have been getting from Williams and Westbrook in the NCAA tournament so far. Both were brilliant against Iowa. Westbrook had a great start against Baylor. Williams had the big second half. If those two are scoring, along with Bueckers, and defending like they have all season, a 12th championship would be in sight.

X factor: Nelson-Ododa was incredibly engaged defensively and on the boards against Baylor. That’s exactly what UConn needs from her at this point. Earlier in the season, as Bueckers was still feeling her way and Williams struggled with her jump shot, the Huskies needed more scoring from Nelson-Ododa. Not anymore. She’s now a defender (five blocks against Baylor) and, believe it or not, a facilitator. The 6-5 center has 11 assists in the last two games. This role for Nelson-Ododa has made an already great offense even better.

Reason to be excited: Aari McDonald. The 5-6 senior was the best player in the regionals, with a pair of 30-point games. She is the foundation of the rebirth of the Arizona program that has culminated with the first Final Four in program history. The two-time Pac-12 Defensive Player of the Year is also as close to a perfect antidote as you’re going to get for UConn’s Paige Bueckers. McDonald’s ability to harass an opposing ball handler is unparalleled. If one player is capable of disrupting the rhythm of the UConn offense, it’s McDonald.

Reason to be concerned: While McDonald excelled against Texas A&M and Indiana, second-leading scorer Cate Reese struggled to find her game. Her 6.5 points per game in those two contests was five below her average. The 6-2 junior found other ways to contribute and had 15 total rebounds, but one scorer is not enough to conquer UConn. Arizona needs Reese to score.

The Wildcats will win if … McDonald keeps shooting this way. Normally a 30% 3-point shooter, the lefty made 11-of-18 (61%) from deep in the last two games. With her incredible speed, her straight-line drives to the basket are tough enough to stop. If her defender also has to worry about closing on a 21-footer, there is no answer.

X factor: As great as McDonald is as an individual defender, she’s not the only one. Only Stanford allowed fewer points and a lower shooting percentage in the Pac-12 than Arizona. The Wildcats will need to keep the Huskies’ scoring in the 60s to pull off the upset. That’s where Trinity Baptiste and Bendu Yeaney could play such vital roles as likely matchups for Williams and Westbrook.

Reason to be excited: Tuesday’s regional final win was the latest example of the different players Stanford can turn to for a winning performance. Ashten Prechtel, a 6-5 sophomore, averages 13.6 minutes and 5.6 points per game and barely played in the first half. She came off the bench to score 16 points in 16 minutes without a missed shot from the field and was Stanford’s second-leading scorer. Against Missouri State, the Cardinal got out quickly. The win over Louisville came with a late surge. These are just microcosmic examples of how many different ways, and with so many different players, Stanford can get a win no matter the stakes.

Reason to be concerned: The Cardinal have put together just one complete game so far in this tournament. They jumped on fifth-seeded Missouri State early and never let up, but against Utah Valley, Oklahoma State and especially Louisville, there were sizable lulls in Stanford’s play. Kiana Williams had a terrible start against Louisville (1-for-11 shooting in the first half). As well-rounded as Stanford is, Williams is one player who is not interchangeable. Tuesday showcased just how important her play is to the Cardinal’s success. Against South Carolina, she needs to be an impact player for 40 minutes.

The Cardinal will win if … they keep making 3-pointers. Long-range shooting is not the first thing that comes to mind with Stanford, yet it’s a staple of the offense this season. The Cardinal have made 50 3-pointers in the NCAA tournament. They are fifth in the country in made 3s on the season and sixth in percentage (38.3%). Williams, Lexie Hull and Hannah Jump, who made 43.2% of her 3-point attempts this season coming off the bench, will be critical.

X factor: How the game is officiated. Stanford coach Tara VanDerveer has bemoaned how physical the play has been in the NCAA tournament. She would prefer less body contact and more free-flowing player movement. South Carolina’s style is predicated on physicality. Any early whistles will tell us in which direction the game is headed. Cameron Brink, a 6-4 freshman, has the length to disrupt South Carolina’s frontcourt and serve as a rim protector. She is a key to Stanford’s defensive effort and a big reason the Cardinal rank second in the country in field goal percentage defense (32.9%). But if she’s allowed to be pushed around, that effectiveness is diminished.

Reason to be excited: Defense, defense, defense. A good one has gotten even better in the NCAA tournament. The Gamecocks are holding their NCAA tournament opponents to 34% shooting (slightly better than the 36% during the regular season), and Sweet 16 opponent Georgia Tech was the only one to score above 60 points. Stanford will present challenges to this defense that Oregon State, the Yellow Jackets and Texas couldn’t, but any team that can shut out another for an entire quarter, as South Carolina did to the Longhorns in the final period of the regional final, is clearly fully committed at that end of the floor.

Reason to be concerned: Moments arise in big games when teams just need a 3-pointer. That isn’t South Carolina’s game. The Gamecocks struggle in half-court sets to create open shots, specifically from 3-point range. They have made just 15 3-pointers in the NCAA tournament, compared with Stanford’s 50. For the most part, South Carolina survives just fine without the 3-pointer being a regular part of its offense. Destanni Henderson (41.3%) and Zia Cooke (37.7%) can make them. But as the possessions get more important in the Final Four and the game slows down in the fourth quarter, South Carolina might have a difficult time finding the critical open look.

The Gamecocks will win if … Aliyah Boston gets consistent touches on offense. This has been a refrain all season, but South Carolina is better when its 6-5 center gets the ball in the low post. Boston forces the defense to react more than any other player on the team. In what was the Gamecocks’ most impressive performance of the postseason, the SEC championship game win over Georgia, Boston scored 27 points and had a usage rate of 30%. In South Carolina’s four losses this season, that usage rate was below 21%. The Gamecocks have won without Boston’s extensive involvement in the offense, but they are better with it.

X factor: Brea Beal has gone from big-time high school scorer to the Gamecock who does all the dirty work. She gets the tough rebound, wins those 50-50 balls and defends with a hard-nosed, physical style. Her likely task in this game against Stanford is to harass Haley Jones. The versatile Jones is such a big part of what Stanford likes to do on offense. Making opponents uncomfortable is Beal’s specialty. If she can do that to Jones, South Carolina’s chances are that much better.

Wednesday morning’s updated ESPN Basketball Power Index tabs UConn as the favorite at 42%, followed by Stanford (32%), South Carolina (19%) and Arizona (7%). Here’s how our panel predicts the final three games of the season will play out.