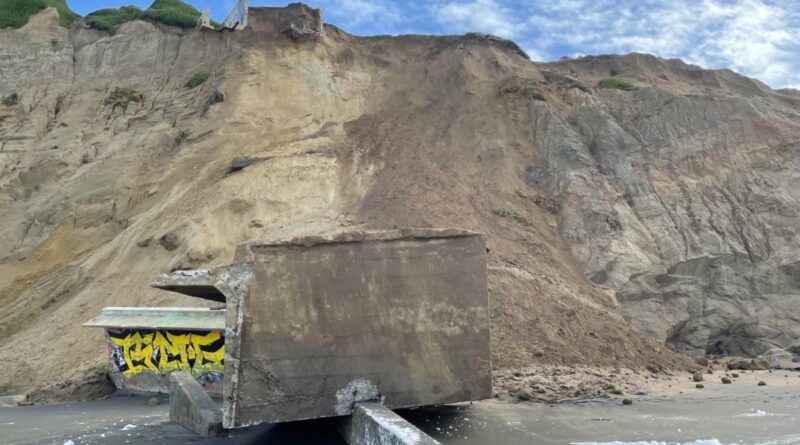 San Francisco Fire Department spokesperson Jonathan Baxter told SFGATE that the building is a former battery bunker and fell amid a landslide.

“Beachcombers at Fort Funston will share the beach today with a WWII military structure undermined when saturated bluff sand slid onto the beach,” the Golden Gate National Recreation Area said in a tweet posted just after 11 a.m.

The agency encouraged visitors to city parks to stay on trails and be aware that hillsides and coastal bluffs are saturated after weeks of rain.

Located in San Francisco’s southwest corner just south of Ocean Beach, Fort Funston sits on the Pacific Ocean and features a network of trails meandering over bluffs that are popular with hikers and dog walkers.

Fort Funston was a critical part of San Francisco’s harbor defenses system from roughly the 1900s into the Cold War era. Battery Davis was erected in 1936 and its 16-inch gun could shoot over 25 miles out into the Pacific Ocean, according to the National Park Service website. It was home to SF-59, one of 12 Nike missile defense sites in the Bay Area during the Cold War.

Northern California has been battered by a series of storms since Dec. 26, but the National Weather Service says dry weather is coming later this week. On Monday afternoon, the sun was shining but more rain is expected on Wednesday before the region is forecast to see a period of dry weather persisting through the weekend and possibly into next week. (Get the complete weather forecast on SFGATE.)

This breaking news story was updated.