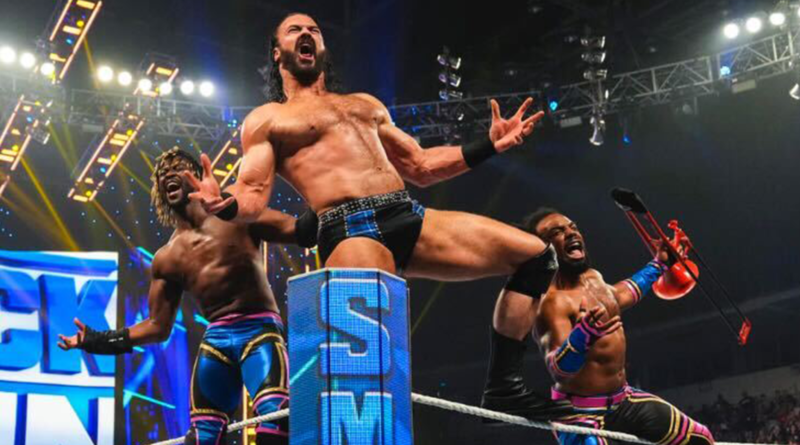 New Day got a surprise third member this week on SmackDown. No, not Big E, but the one they call Big D.

Welcome back to another SmackDown roundup, this time covering the May 27 edition of the show, featuring Drew McIntyre reappearing for a match with New Day, Sami Zayn on The KO Show and Ronda Rousey.

Here’s a recap of the match results:

– Ronda Rousey vs. Raquel Rodriguez ended in no contest due to immediate interference from Natalya and Shayna Baszler

Match of the night: New Day and McIntyre vs. The Brawling Brutes

The New Day shocked the WWE Universe by enlisting Drew McIntyre to fight alongside of them against Butch, Sheamus and Ridge Holland on Friday Night SmackDown.

What a fun way to bring Drew back to the show after he was gone the last few weeks promoting Clash at the Castle.

It was also nice that Woods got the pinfall for their team.

Admittedly, New Day in a six-man tag match without Big E still doesn’t feel right, but everyone involved did a good job of making you forget about it.

McIntyre’s dancing at the end was particularly entertaining.

It looked like a mix of Jeff Jarrett and Eddie Guerrero taunts, rather than actual dancing, but you gotta respect the guy for giving it his all.

This was one of those WWE segments that could be enjoyed by anyone.

Sami and Kevin, former best friends, acting like they didn’t remember why they had stopped talking in the first place ­– even though they both totally did – was incredibly relatable.

That moment quickly descending into another argument (one where they both reveal they very much still remember their issues) was played perfectly by both performers.

This whole conversation felt like a scene out of “Curb Your Enthusiasm.”

This was a minor nitpick on my part, but I just couldn’t get over Shayna Baszler (of all people) interrupting Ronda’s match.

Why would Shayna suddenly take issue with Ronda just because Shotzi fired her up a little?

The slightest tease of a match between Rousey and Baszler should be treated with much more care. If they’re ever going to do that again on TV, the upper-brass needs to have a firm plan in place first.

Don’t forget to follow all your favorite WWE Superstars and shows in the FOX Sports app to receive alerts on what they’re doing and more.

Get more from WWE – WWE SmackDown Live Louisvlle – 4/18/2017 Follow your favorites to get information about games, news and more.