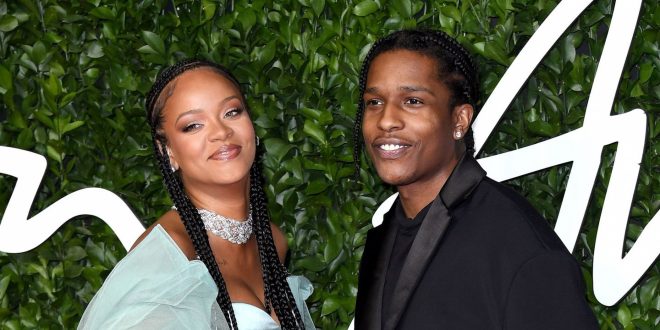 Yes, A$AP Rocky Is Dating Rihanna And Says She’s ‘The Love Of My Life’

In a revealing and intimate new GQ cover story, Rocky catches the world up on what the past few years of his life have looked like. Part of that includes sitting in a Swedish prison cell for “23 and a half hours a day” after his 2019 arrest, sketching out pieces for a collaboration with Parisian designer Marine Serre, and yes, romancing Rihanna, calling her both “the love of my life” and “my lady.”

He’s tight-lipped on the timeline of their relationship, but there are a few things we know. They’ve been spotted in Barbados, Los Angeles, and elsewhere over the past year and posed together to promote Fenty Skin last summer. They appeared together on the red carpet at the 2019 Fashion Awards in London. Plus, Rocky was the opening act on Rihanna’s Diamonds World Tour all the way back in 2013, and they performed together at the 2012 MTV VMAs.

The rest of the details? Rocky thinks being coupled up is “so much better when you got The One,” as he says in the profile. “She amounts to probably, like, a million of the other ones.” And then, to really leave it unambiguous, he underlines everything in verbal Sharpie: “I think when you know, you know. She’s The One.”

Rocky is also asked point blank if he’s ready to be a father, and he seems game. “I would have a very fly child. Very.”

Elsewhere in the profile, Rocky digs deep into the past year of his life, including dropping acid, designing clothes, and doing as much traveling as possible. With Rihanna, in a large bus, from L.A. all the way to New York City. Extremely romantic and liberating shit. Oh, and he recorded some music via a mobile setup where he could along the way. “God blessed me with a lot, so I’m working with that,” he says, “and that’s enough to make some fuckin’ fire.”

Rocky’s latest album is, for now, titled All Smiles and features one confirmed collaborator: Morrissey. Rihanna’s presence will be felt, he hints, by virtue of being there to help with the work, though he won’t reveal much else. No word, either, on whether or not he also worked on the much-discussed, still-in-production reggae album Rihanna is reportedly still working on.

But hey, he’s in love. And he’s free. “I’ve been experimenting with style, with rhythm, with sonics, film, food, health, love, life — for real,” Rocky says. Read the entire piece over at GQ.