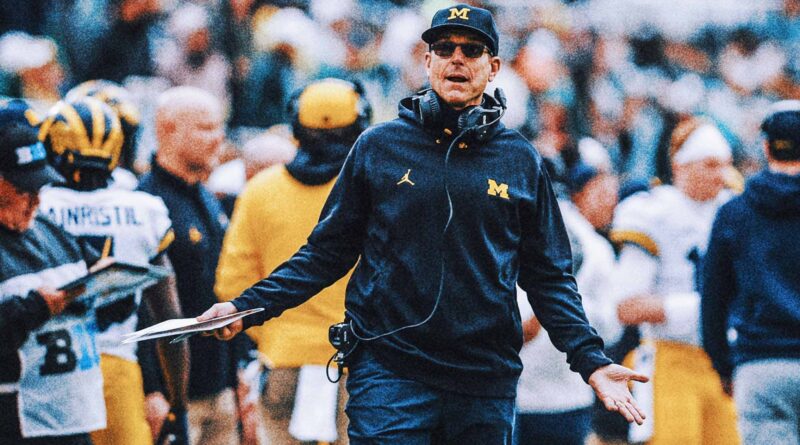 ANN ARBOR, Mich. — He waited for the decision with hands on hips, chest heaving, mouth guard hanging between his lips.

A flag had flown on an 8-yard touchdown run by Michigan State star Kenneth Walker III, after the Spartans had caught arch-rival Michigan offside and misaligned for the second time in as many quarters, using a warp-speed approach that confounded first-year defensive coordinator Mike Macdonald. And as the crowd of 76,549 roared with delight when the referee confirmed what nearly everyone at Spartan Stadium already knew — that at least one Wolverine was on the wrong side of the line of scrimmage when the ball was snapped — edge rusher Aidan Hutchinson rolled his eyes, removed the mouthpiece and turned away in disgust.

“We knew it was coming,” Hutchinson said when asked about Michigan State’s tempo during a postgame appearance on the athletic department’s “In the Trenches” podcast. “We just gotta get lined up and play ball. A lot of guys were just looking to the sideline. Shoot, I mean, when they’re going fast, sometimes you’ve just gotta play ball even when you don’t know the play or what’s going on. I mean, that’s what happens. You’ve gotta get lined up and be a ball player.”

Stinging as those words might have been, Hutchinson painted an accurate picture of his team’s defensive meltdown in a 37-33 loss that finished as the only blemish from an otherwise perfect 2021 regular season. Time and again, the pace of Michigan State’s offense exposed a flaw in the substitution-heavy approach Macdonald brought with him from the NFL, where he’d spent the previous seven years with the Baltimore Ravens. Whatever adjustments the Wolverines made in real-time proved futile. A series of personnel gaffes in the first, second and fourth quarters facilitated three of the Spartans’ five touchdowns, including a 23-yard run from Walker that proved to be the game-winning score with 5:08 remaining.

This year’s skirmish for the Paul Bunyan Trophy carries far less national significance than what was billed as arguably the biggest game in the history of the rivalry when both teams entered undefeated last October. But for a Michigan program that achieved so many of its goals in 2021 — beating Ohio State, winning the Big Ten Championship, securing a berth in the College Football Playoff — there is an emotional importance to Saturday’s rematch at Michigan Stadium tethered to the self-inflicted nature of its defeat in East Lansing. The revamped defense passed important physical tests in wins over Maryland and Penn State earlier this season, and a showdown with Michigan State presents the Wolverines with a chance to atone for their slew of mental mistakes last year.

With Macdonald departing for the NFL last winter, the task of combating Michigan State’s tempo falls to new defensive coordinator Jesse Minter, who came to Ann Arbor after one season in the same role at Vanderbilt and, more importantly, four years with the Ravens from 2017-20.

That Minter and Macdonald overlapped with the Ravens was central to Harbaugh’s criteria for selecting a new coordinator. He wanted a coach whose philosophical and schematic preferences matched the ones Macdonald used to lift the Wolverines from 95th in scoring defense under former coordinator Don Brown in 2020 (34.5 points per game) to eighth in 2021 (17.4 points per game). And for Harbaugh, plucking another assistant from his brother John Harbaugh’s staff in Baltimore fit the bill — especially since he’d already interviewed Minter a year prior.

Which is also why the Wolverines are still susceptible to mishaps when offenses move at faster speeds. The defensive system Macdonald and Minter learned with the Ravens is predicated on swapping personnel based on the down and distance for any given situation or to match the formations an opponent chooses to employ. It’s common to see players shuffling on and off the field throughout a drive, sometimes on a snap-by-snap basis.

Though functional in the NFL, such an approach can be exploited by some of college football’s up-tempo, huddle-averse offenses that race to the line of scrimmage to discourage defenses from substituting. The reason co-defensive coordinator Steve Clinkscale doesn’t even shift his cornerbacks from side to side in search of favorable matchups is the same reason rotating defensive linemen and linebackers is risky: It takes too much time.

“I think what they want is for you to simplify your defense,” Minter said of teams who run up-tempo offenses. “They want to get you in base defense, and they keep you in base defense into third down (when most teams use different formations). But it works both ways. So for a team to stay in two tight ends and two receivers on a third-and-8, sometimes that’s OK, and we feel OK about those matchups.

“Just try to have as many answers as we can for whatever method they try, whether it’s staying in one personnel and going fast or trying to get us into a certain personnel (group) and keep us in that personnel. But I think it goes both ways.”

Michigan State averaged 2.39 plays per minute last year, but accelerated its pace to 2.64 plays per minute against the Wolverines to capitalize on the frequent substitutions head coach Mel Tucker and his staff saw on film. Over the course of the game, the Spartans caught Macdonald’s group with the following: an illegal substitution penalty in the first quarter when Michigan had 13 players on the field; an offside penalty in the second quarter when edge rusher Mike Morris ran through the neutral zone during a late personnel exchange; a second offside penalty when Morris jumped the snap in the fourth quarter; and another illegal substitution on what proved to be the game-winning drive when seemingly half the defensive line was caught out of position.

The four penalties were spread across three Michigan State possessions, all of which resulted in touchdowns by Walker, who carried 23 times for 197 yards and five scores. He became the first player in history to rush for five touchdowns against Michigan.

“Practice it, prepare for it, anticipate it,” Minter said. “Have a really good focus on when they substitute versus when they don’t substitute. It’s something we’ve worked on a lot this year. We haven’t been perfect in that regard, but definitely just prepare and practice for that stuff and know that they’re going to attack us that way.”

This year’s Spartans are averaging 2.46 plays per minute through the first seven games in a pace that is nearly identical to their 2021 offense. They averaged 2.44 plays per minute in the win over Wisconsin on Oct. 15 that snapped a four-game losing streak, and will travel to Ann Arbor with some of their confidence restored.

Michigan enters the rivalry game having faced three Big Ten offenses with faster operating speeds than Michigan State has displayed. Maryland ran 2.61 plays per minute in a hard-fought, seven-point loss at Michigan Stadium in September. Penn State ran 2.83 plays per minute in a blowout defeat two weeks ago. And Indiana, which owns one of the fastest and least efficient offenses in the country, ran a staggering 3.36 plays per minute after head coach Tom Allen told reporters he wanted to stop Minter’s group from substituting in what ended as a 21-point loss.

Now comes the real test when wounds from East Lansing are probed. Will Michigan’s defense stumble en route to a third consecutive loss to the Spartans? Or will this year’s Wolverines make Hutchinson proud by just lining up and playing ball?

“Nobody,” Harbaugh said, “has watched the highlights of that game and the film of that game more than we have.”

Michael Cohen covers college football and basketball for FOX Sports with an emphasis on the Big Ten. Follow him on Twitter at @Michael_Cohen13.