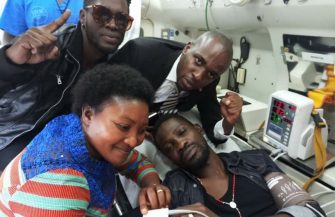 Your pressure on this regime has forced them to make our bail faster. – Bobi Wine’s First Words Out Of Prison. Promises To Fight And Save Country From Reigning Regime.

Hours after being granted bail together with 32 others, bedridden Kyadondo East MP, Hon.Robert Kyagulanyi has come out to make his first public statement to the country.

Bobi Wine expressed his sadness to the family of his late driver who was shot from Arua.

He however applauded the public for pressurising the regime thus making their bail out process.

Below is his full statement.

I am really saddened by the information I have received
of the death our brothers and sisters who have given their life
to stand for the truth. My heartfull condolence goes to the
family of my brother who was my personal driver Kawuma
Yasin who was gunned down and all those who were
protesting for my release. Like as i told you”People power is
greater than people in power”. Your pressure on this regime
has forced them to make our bail faster.
I will fight untill our country is saved of thijs regime and in the
end of it all this will be to remember. Once again thank you
people for the love. I will make official statement of all what
happened after some medical examination.
#PeoplePowerOurPower