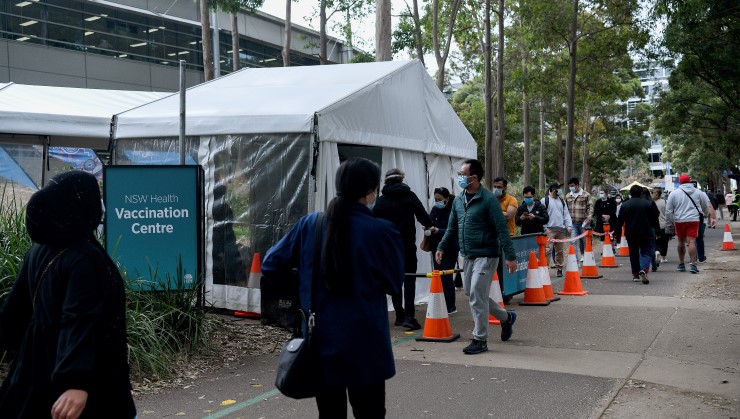 NSW has reached a major vaccination milestone, the ABC reports, having administered at least one dose to 70% of the eligible population. A whopping 276,925 people were jabbed across Australia yesterday, including a new record in NSW of 148,297. The ACT is speeding towards the same 70% milestone, likely to hit it early next week, while Victoria is on track to reach that threshold by September 20. Victorian Premier Dan Andrews has been urging people to take up 70,000 available AstraZeneca appointments, calling it “the best vaccine right now”. News comes as the Herald Sun ($) reports September 20 will mark 235 total days in lockdown for Melbourne, making it the world’s most locked-down city (Buenos Aires holds the current record).

Queensland Premier Annastacia Palaszczuk is the latest leader to swerve off the national roadmap. She says she won’t open her borders until children under 12 are vaccinated in her state, The Australian ($) reports. It comes in the wake of WA’s Mark McGowan, while barracking for his own staunch border policy, accusing the Commonwealth of trying to “infect the public”. NSW Premier Gladys Berejiklian said yesterday that it’d be “disappointing if New South Wales and Victorian residents were able to go overseas before they can go interstate”, Sky News reports, a fate which is seeming more and more likely.

Remember the NSW Health bungle in early July which saw all Year 12 students at elite Sydney school St Josephs vaccinated with Pfizer, even though it was only Indigenous students who were eligible? The government called it a simple error — but The Australian ($) reports this morning that a NSW Health employee emailed CHO Kerry Chant admitting he made a “personal approach” to get them all jabbed because he knew the “Joeys situation well”. The Oz got access to the email through freedom of information laws.

The world is seeing five times as many extreme weather disasters compared to pre-1970 levels — and global warming is the reason, a UN report says. Two million people are dead, and the world has lost $3.64 trillion from some 11,000 disasters up to 2019, Al Jazeera reports. Conversely, the annual death toll has actually fallen — from more than 50,000 in the 1970s to about 18,000 in the 2010s, indicating we’re better prepped to handle disasters these days.

And what about the actual cause of them? Australia’s leading scientists and engineers say we’re prepped to handle that too. The Australian Academy of Technology and Engineering has told the Australian government the country already has the technology to slash its emissions, and that they should be “getting on with it”. Guardian Australia reports solar and wind power, energy storage, electric vehicles and energy efficiency for buildings would cut emissions in the electricity, stationary energy and transport sectors. ABC asks this morning: why don’t we just pay coal miners $3700 a month to retire? It worked for Spain.

Former PMs Julia Gillard and John Howard have come together to chat for the 70th anniversary of the ANZUS treaty, ABC reports. Speaking at an event hosted by the United States Studies Centre, Howard said the 20-year war in Afghanistan was not a failure, but acknowledged the criticism over the US’ exit. Gillard agreed, saying there was the need for “deep reflection” from Australia, the US and many around the world “given the circumstances in Afghanistan” — like widespread hunger, the economic crisis, drought and poverty. Now Australia and its allies have left, Gillard continued, the question remains over how we can balance aid and development with possible sanctions for the Taliban government. The discussion comes just days after former prime minister Malcolm Turnbull said American-led wars in the Middle East have done “more harm than good”, SMH reports.

Despite the Taliban’s grip on Afghanistan, Howard said the greatest foreign policy challenge remains China. He called the country “belligerent” and “aggressive” but said it was critical that Australia continues to work with it as an important partner. It’s an incredibly tense balance to strike — just ask Yun Jiang, as SBS has. Coalition Senator Eric Abetz demanded the ANU academic condemn the Chinese Communist Party during a Senate committee last year, as BBC reported. Jiang says our frosty relationship is doing damage to more than just trade — Chinese Australians and international students feel lost in the middle.

ON A LIGHTER NOTE

There are 36,280 more elephants in Kenya than there were at last count, The Australian ($) reports. It follows a three-month census in the country’s 58 national parks, reserves and conservancies. There has been a crackdown on ivory and horn hunters, which is thought to be the reason why the Kenyan elephant population has increased by a healthy 12% since 2014. It comes as Kenya’s Sheldrick Wildlife shared a video of an orphaned elephant reuniting with a head keeper that helped raise him. He is all grown up now and has been successfully reintroduced into the wild but seemed to recognise his former carer — “simply magical”, the post read. An elephant never forgets, I suppose.

Meanwhile, two teeny elephant twins have been born in Sri Lanka — an incredibly rare occurrence. The two little boys are the first elephant twins born in captivity in Sri Lanka since 1941, ABC reports. Mother Surangi, 25, who shacked up with Pandu, 17, is doing fine, as are the elephant bubs who are “small” but “healthy”. Oh — and another tiny elephant had its first swimming lesson at Columbus Zoo yesterday.

That’s a wrap on all the elephant news, folks. Hope it’s a memorable Thursday.

THEY REALLY SAID THAT?

If they were going to pay back that money then they wouldn’t have necessarily taken it in the first place. If businesses had had to show an actual turnover decline then we wouldn’t have gotten the money out the door.

The treasurer says the JobKeeper scheme deliberately did not include a clawback provision, despite $6 billion in emergency funding flowing to 150,000 companies who actually increased their turnover last year. Labor MP Andrew Leigh has called it the biggest waste of taxpayer money in Australian history.

Michaelia Cash to Mark McGowan: open the border at 80% or I’ll see you in court

“When Palmer challenged WA’s laws last year, the Commonwealth initially intervened. Both Morrison and former attorney-general Christian Porter were so confident the challenges would succeed, they spent $1 million supporting them. Although Cash denied the government would pursue court action, her statements are clearly a coded message of support to any billionaires planning another crack at the west.

“Her threat may also excite voters in the locked-down eastern states, who the government’s reductive message of freedom once the country hits vaccine targets is calculated to woo. McGowan will not realistically keep the border shut forever, and yesterday conceded it might remain only a few months behind the rest of the country in reopening. Despite the Morrison government’s anger, that position is immensely popular in the west. Talk of a legal challenge won’t go down well there.”

All promise and no delivery: Morrison’s ‘slap in the face’ for sex abuse survivors

“The prime minister stands accused of failing to deliver on a promise he made three years ago to survivors of child sex abuse to provide a national centre dedicated solely to their needs. Scott Morrison made the pledge during his national apology speech to survivors in August 2018.

“The centre would be ‘a place to assist with lasting change’, he said. Its remit would include helping survivors ‘deal with the stigma’ and help ‘guide best practice for training and other services’ … Somewhere along the line the national centre for survivors became badged as the national centre for excellence in the prevention of child sex abuse. The shift happened without explanation.”

“Inland rail isn’t just another rotten Nationals rort, like the idiotic Alice Springs-Darwin line built by the Howard government that now serves to carry a few Bollinger-soused oldies up and back to the Top End at great expense. It’s a coal export subsidy scheme — and a huge one, at $15 billion (at least), plus whatever losses the Australian Rail Track Corporation makes every year when it runs it.

“That Joyce is lying when he claims it will reduce emissions isn’t just him being a moron. It’s a cover for the grim truth that inland rail is yet another taxpayer handout to the coal industry orchestrated by the denialists of the Coalition.”

READ ALL ABOUT IT

There’s no need to panic about the new C.1.2 variant found in South Africa, according to a virologist – Ian M Mackay (The Conversation): “It’s early days, so it’s impossible to predict what will happen to C.1.2. It could expand and overtake other variants, or it could fizzle and disappear. Again, just because this virus has a bunch of mutations, it doesn’t necessarily mean the mutations will work together to out-compete other variants. Delta is the kingpin variant at the moment, so we need to keep an eye on C.1.2 to see if it starts to push out Delta. So, it’s important to keep watching it in case it starts transmitting widely. One group in Australia, the Communicable Diseases Genomics Network, monitors these developments closely.

“At this point, there’s no need for concern. Australia still has its border restrictions in place, so the odds of this rarely occurring virus coming into the country and spreading are very low. There’s no evidence our vaccines don’t work against it. Our vaccines provide protection from severe disease and death against all other SARS-CoV-2 variants thus far and there’s a good chance they’ll continue to do so against C.1.2 variants.”

Without help for oil-producing countries, net zero by 2050 is a distant dream – Ali Allawi, Fatih Birol (The Guardian): “In the Middle East and north Africa, global warming is not a distant threat, but an already painful reality. Rising temperatures are exacerbating water shortages. In Iraq, temperatures are estimated to be rising as much as seven times faster than the global average. Countries in this region are not only uniquely affected by global temperature rises: their centrality to global oil and gas markets makes their economies particularly vulnerable to the transition away from fossil fuels and towards cleaner energy sources. It’s essential the voices of Iraq and similar countries are heard at the Cop26 climate change conference in Glasgow this November.

“To stand a chance of limiting the worst effects of climate change, the world needs to fundamentally change the way it produces and consumes energy, burning less coal, oil and natural gas. The International Energy Agency’s recent global roadmap to net zero by 2050 shows the world’s demand for oil will need to decline from more than 90m barrels a day to less than 25m by 2050. This would result in a 75% plunge in net revenues for oil-producing economies, many of which are dominated by a public sector that relies on oil exports and the revenues they produce.”

Get your first shot of Crikey.

Help us keep up the fight.

Get Crikey for just $1 a week and support our journalists’ important work of uncovering the hypocrisies that infest our corridors of power.

If you haven’t joined us yet, subscribe today to get your first 12 weeks for $12 and get the journalism you need to arm yourself against stupid.