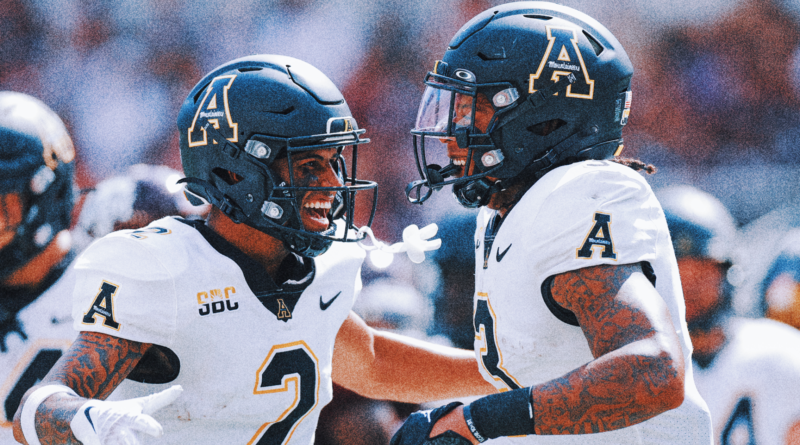 It was fifteen years ago when Appalachian State shocked the college football world with a memorable victory over Michigan in Ann Arbor. The Mountaineers took down another powerhouse program in their own house on Saturday.

Chase Brice threw for 134 yards and a touchdown and Appalachian State took advantage of two turnovers to stun No. 6 Texas A&M 17-14.

Appalachian State won a week after scoring six touchdowns and 40 points in the fourth quarter in a 63-61 opening loss to North Carolina.

Appalachian State (1-1) settled for a 29-yard field goal by Michael Hughes to take a 17-14 lead with about eight minutes left after Christian Wells was wide open but dropped a touchdown pass on third down.

Camerun Peoples, who finished with 112 yards rushing, had a 1-yard run on third down on the next possession to keep Appalachian State’s drive going. He then dashed 48 yards to the 12 on the next play and the Mountaineers ran out the clock.

The Mountaineers kept A&M’s offense in check a week after coach Shawn Clark was left looking for ways to fix his defense after the 63-point outburst by North Carolina.

Devon Achane ran for a touchdown in the first half and returned a kickoff for a score in the third, but the Aggies had trouble getting much else going on a mistake-filled day.

The Aggies were driving in the third quarter when Dexter Lawson Jr. forced a fumble by Evan Stewart after a 13-yard reception and it was recovered by Nick Hampton.

The Mountaineers took a 14-7 lead when Henry Pearson grabbed a 9-yard TD reception from Brice with about 2 1/2 minutes left in the third.

The lead was short-lived as Achane returned the ensuing kickoff 95 yards for a touchdown seconds later. Achane, who is a sprinter on Texas A&M’s track team, juked a defender before shedding a would-be tackler and racing downfield for the score to tie it at 14-all.

Haynes King was sacked by DeAndre Dingle-Prince and fumbled late in the first quarter. Texas A&M lineman Layden Robinson recovered the ball, but he also fumbled and this time Appalachian State recovered it.

They cashed in on the mistake when Ahmani Marshall scored on a 4-yard touchdown run that made it 7-0 early in the second quarter.

The Aggies tied it up when Achane dashed 26 yards for a touchdown on the next drive.

King finished the game with just 97 yards passing. It’s just the third time that an SEC team ranked in the AP Top 10 lost to an unranked school from a non-power conference since 2000.

As for Appalachian State, it isn’t the only team from the Sun Belt to pull off a major upset on the road on Saturday. Roughly an hour earlier, Marshall completed its stunner of No. 8 Notre Dame in South Bend, Indiana, winning 26-21.

Appalachian State moves to 1-1 on the year after losing its season-opener to UNC in a high-scoring affair. It looks to carry the momentum when it begins conference play against Troy next week.

Texas A&M drops to 1-1 on the year. It hosts No. 16 Miami before beginning SEC play a week later.