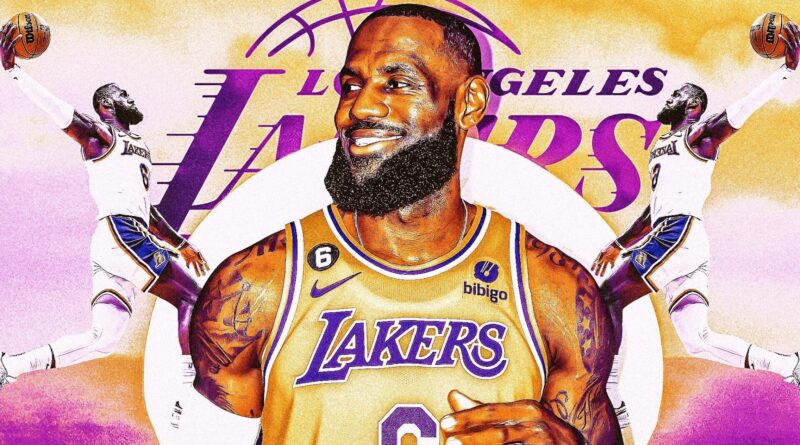 In a viral video with over seven million views, LeBron James appears overcome by fatigue during a game against the Dallas Mavericks on Christmas. He slows his dribble to a crawl and exasperatedly bobs his head.

A fraction of a second later, James then switches gears, blowing past Davis Bertans and Christian Wood, parting multiple defenders before making a reverse layup as though he were Moses, and they were the Red Sea.

A woman who works for Nike named Jasmine Watkins retweeted the video and wrote that’s “how the old heads get you,” adding they “act like they [are] tired and then make a move to the rim.” Her comment reached James himself, who replied with five emoticons of a face laughing so hard it’s crying and writing, “FACTS.”

As James turns 38 on Friday, he’s still playing MVP-caliber basketball, something unprecedented for his age. Michael Jordan lost steam as he aged. Tim Duncan became the fourth or fifth option in San Antonio.

James is defying Father Time, averaging 27.8 points, 8.1 rebounds and 6.6 assists in his 20th season in the league, the oldest player to put up those numbers, according to StatHead. To be able to do that, we’re witnessing such a rare combination of intelligence, skill, physical prowess and cunning that it should be widely recognized and reverently celebrated, similar to a once-in-a-generation eclipse.

But instead, his greatness in the twilight of his career is being wasted, slipping through the cracks like a world-famous violinist playing a set in a New York City subway as passersby unwittingly rush about their day.

LeBron’s message to Lakers: ‘I want to win & still compete for championships’

The problem is it’s difficult to celebrate greatness when a team is near the cellar of the league. The Lakers are currently in 13th place in the Western Conference, only 3.5 games ahead of the last-place Houston Rockets. Without Anthony Davis, who is out indefinitely with a stress injury, the Lakers have lost five of their last six contests.

Simply put, the Lakers’ badness is drowning out James’ greatness.

On Christmas, for example, James led all scorers with a 38-point performance on 56.6% shooting. But the story of the night was the Lakers being outscored in the third quarter 51-21, as they fell 124-115.

As the trade deadline approaches, the question the Lakers will face is simple: Will they sacrifice first-round picks and make a trade to give James a fighting chance to win now? Or will they chalk up this season as a lost cause, save their assets, and try and revamp the team over the summer?

If they choose the latter, they’ll be committing a basketball crime of sorts. They’ll be squandering one of the most impressive, age-defying performances from an athlete in any sport ever.

He’s a four-time NBA champion who led both the Miami Heat and Cleveland Cavaliers to the Finals eight straight seasons. He’s not used to losing.

Why LeBron deserves statues with CLE, MIA and LAL

You can’t blame James for his mounting frustration.

Even though he’s still at the top of his game, he knows he needs help. For the first time in his career, he has referred to himself as the second option, behind Davis. And throughout this season, he has practically pleaded for help.

In October, he acknowledged that the Lakers aren’t “constructed of great shooting.” Then, after Davis suffered the right foot injury, James said last week, “We’re already a team without a lot of length and not a lot of size.”

So, if they don’t have shooting, length or size, what do they have?

Clearly, an aging star and an often hobbled star just isn’t enough, even if they’re two of the best players in the world. The fact is the Lakers need defense (they’re 22nd in the league) and they need shooting (they’re 25th in 3-point percentage).

Despite the Lakers’ challenges, James has tried to put the team on his shoulders.

He recently had seven straight 30-point performances. He’s still dunking with the power of a freight train, agilely splitting defenders with dribble-drives, crashing the boards as though he were a decade younger, and dishing passes that display an unparalleled sense of court vision.

The thing is, it’s no coincidence that James is playing so well two years shy of 40. So much time and thought has gone into what we’re seeing now, which also helps explain his very understandable frustration. Throughout this season, James has been especially introspective when asked about his endurance, often revealing insight about his process over the years.

He recently said that in his first 12 seasons in the league, he could rely on “super-duper athleticism” and didn’t have to be “as dialed in” on the game.

“I could go out and just figure things out once I jumped in the air,” he said, adding, “I was going to be up there a lot longer than you.”

But James always knew that wasn’t sustainable for the long-term. So, he made a point of growing his game, so he could be the best player in the world even when his hang-time decreased. He said he actually used opposing coaches as tools to aid him with that process, studying the way they opted to defend him, so he could shore up any holes in his game.

“Coach Pop helped me by going under pick-and-rolls constantly,” James said in early December. “Dwane Casey and his defense that he had on me when we went against Dallas in the Finals in Miami helped me. Rick Carlisle, part of that as well. So a lot of those coaches helped me get better because I knew that in order for me to be the best player I can be, and one of the greatest of all-time, I could not have no weakness.”

James also revealed a few weeks ago that he has been focused on keeping his body sharp since he was in elementary school. Beginning at age 10, James said he’d stretch both before he went to sleep and when he woke up. And in high school, he said he was one of the few kids who would ice after games.

Heat coach Erik Spoelstra, who coached James for four seasons from 2010-2014, told reporters Wednesday that James was at the “forefront” of taking care of his mind and body in the league, adding that he’d even do small things to remain focused, such as keep his locker tidy. He also said James is incredibly ahead of the curve when it comes to adopting new skills.

“He would see something, and he would work on it for a day, and then he would try it in a game, and it would look like he had been working on that for a couple years,” Spoelstra said. “That’s how quickly he could assimilate and apply something.”

But the question is, how much longer can this last?

Even though James is still defying the laws of time, there’s almost a sense of dread that comes with watching him play now, knowing the sand is quickly falling through the hourglass.

And if the Lakers don’t make some serious changes soon, such an incredible athletic feat will be for naught.

Even though James’ body is holding up, his mind can clearly only take so much of what’s happening around him.

It’s something James made abundantly clear after the Lakers’ loss on Christmas.

“How many times are you going to try to dig yourselves out until it’s too much dirt on you?” he asked.

For James, the clock is ticking.

For the Lakers, the pressure is mounting to give James the shot he deserves.

And for the rest of us, we had better appreciate what’s happening in front of our eyes before it’s too late.

Melissa Rohlin is an NBA writer for FOX Sports. She previously covered the league for Sports Illustrated, the Los Angeles Times, the Bay Area News Group and the San Antonio Express-News. Follow her on Twitter @melissarohlin.

Get more from LeBron James Follow your favorites to get information about games, news and more