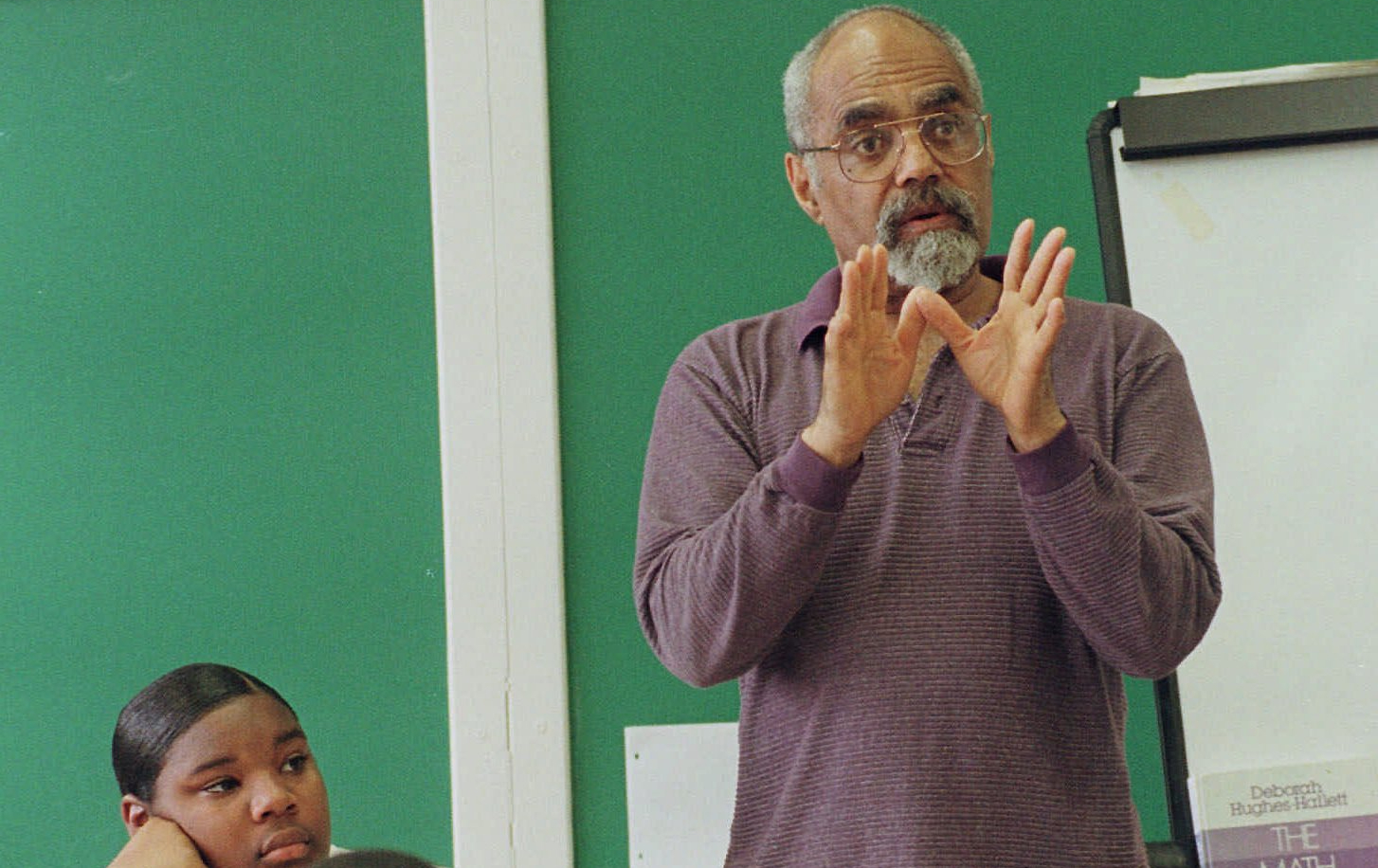 Bob Moses: The Fullness of the Man

I once asked Bob Moses, who died on July 25 at the age of 86, for an example of empowering grassroots leadership. He replied, “Well, Mrs. [Hazel] Palmer… She really came to symbolize for me…this leadership phenomenon that Ella [Baker] pointed us to and she never became a media person. She always worked behind the scenes in the Freedom Democratic Party. She had been the janitor at one of the local schools and then her children got involved in the Freedom Rides in ’61 and then she began to work with Medgar [Evers] and then when Medgar was assassinated in ’63, she came over to the COFO [Council of Federated Organizations] office and started working with us and then she got involved in the Freedom Democratic Party and became sort of the chief networking person out of the Jackson office on the Watts line, so she really would do a whole lot of the calling and networking with groups across the country and really became very sophisticated in her understanding of the movement and the organizing, what the movement was trying to do with poor people like her.… So, Mrs. Palmer, I used to go around and talk about her because she really came to represent what we were looking at trying to do in the community organizing because there was, I think there’s a dimension to it which is dealing with this transformation of people.”

One component of the fateful 1964 Mississippi Summer Project was its Freedom Schools, intended to help develop the next generation of young activists. Near the end of the summer, the group’s statewide conference was held in Meridian—in part because Mickey Schwerner, James Chaney, and Andrew Goodman had been killed while trying to establish a Freedom School near that town. The young people essentially took over the planning and, according to Staughton Lynd, Freedom School coordinator, as the convention went on “these teenagers were rejecting the advice of adults…for they had discovered they could do it themselves.” The kids developed guidelines for housing, education and health programs, suggested that repressive school districts be boycotted and resolved that the United States should stop supporting dictatorships. Bob Moses couldn’t get enough of it. Lynd said, “It was the single time in my life that I have seen Bob happiest. He just ate it up…. He just thought that was what it was all about.”

For Moses, it was always all about people growing, learning, becoming more confident and competent, transforming themselves into the kind of people who could make their voices heard. His deep reverence for people the world calls ordinary owed much to his father, who on their wanderings around Harlem taught Bob to see the events of the day through the eyes of the person in the street. His father’s tutelage, he said to me once, is what made him so receptive to the teaching of Ella Baker, the great advocate of grassroots democracy who organized the conference at Shaw University in 1960 which led to the founding of the Student Nonviolent Coordinating Committee (SNCC). I am convinced, too, that some of Bob’s regard for common folk was just intellectual; he believed that some of those relegated to the margins learned to see with a clarity seldom available to those befuddled by privilege, and he often acted as if time were better spent listening to them than to the learned. Those of us working with him to establish the Algebra Project in Chicago learned that if we needed to maneuver him into doing something, it was best to get a community person to do the asking. He would listen to them.

Stories about his physical courage abound, but it is hard to improve on the tale told by Kwame Ture (Stokely Carmichael) about the time some SNCC workers were in a car trying to outrun a car full of gun-waving white men—and Bob deciding they weren’t a threat and just taking a nap. Percy Larry, an early movement supporter in McComb, Miss.: “Anytime a man come in my community and took the hardships that he took, if he was wrong, I better join with him anyway. He’s ready to take a beating, [get] jailed, being bombed and get back on two feet…. I’m ready to join that fellow, wherever he is, right or wrong.” But courage wasn’t rare in the movement. And it doesn’t explain the deep impact Bob had on so many people. That seemed to have much more to do with his moral grounding, what Mr. Larry in McComb would have called “the fullness of the man”: his patience, his lack of ego, his disdain—I think fear, really—of self-promotion, the pureness of his conception of democracy, his limitless confidence in what ordinary people could become, his work ethic, his valuing people by listening to them.

Mary Lane, one of the remarkable young leaders thrown up by the movement in Greenwood, Miss., remembers Bob as “someone you could sit down and talk with. And really, after talking to him, you would really understand.… You’ll be a little broader than you were at first. And he was a person that could come to you, ask you to do a thing and you were willing to do it. Whatever it might have been. He had this thing about him like if it was Bob who said it, you know it had to be done.”

Her friend Mary Boothe remembers Bob as a “straight cat,” the person who showed her how to be Black without being ashamed. Just a conversation with Bob could be an invention to finding a stronger self.

In his novel God’s Bits of Wood, Ousmane Sembene poses the riddle: What washes water? If water is so pure, it washes everything else, what is clean enough to wash water? The answer, revealed through the process of struggle, is the human spirit. Bob Moses dedicated his life to proving that a movement grounded on the best in the human spirit could face down the hurts of the world. That spirit is available to any of us any time we want to claim it.

Bob Moses died standing pat, beating against the barriers to full Black participation in American life, just as he was doing 60 years ago. Among a lifetime of social change projects, he and his wife, Janet, have recently been building a national project to create local organizations committed to addressing manifestations of the racial caste system in their schools. More information is available here. However you do it, don’t mourn; organize.